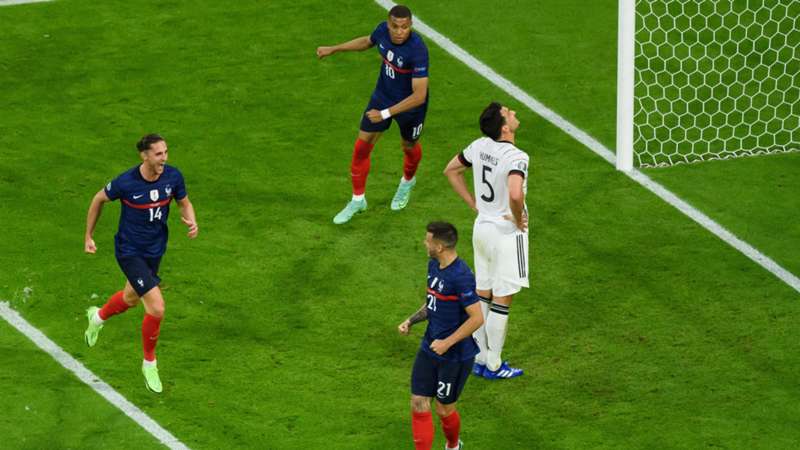 The first-half blunder was the difference.

Mats Hummels' return to the German line-up in a major tournament was one to forget as his first-half own goal was the difference in a 1-0 win for France at Euro 2020 on Tuesday.

Held in Munich, the game was the group-stage opener for both sides, and the competition's first real clash of the titans as reigning world champion France looked to extend a recent string of positive results against the Germans.

France did just that thanks to Hummels' 20th-minute blunder, which ironically came following some calm, controlled play by his side. Despite the strong opening stretch for Germany, the French only needed a single moment to strike, and they did just that when a pinpoint pass into the area by Paul Pogba led to a driven square ball across the face of the German goal by Lucas Hernandez. With Kylian Mbappe lurking, Hummels attempted to sweep the ball clear while running towards his own team's net, but instead struck it into the top corner and past a helpless Manuel Neuer.

The goal seemed to awaken the French, who were the better side for the remainder of the contest. Led by Mbappe and Karim Benzema, who each had goals called off due to offsides in the second half, France was able to create several chances over the course of the game while also limiting the Germans to only one shot on target.

Germany eventually ran out of ideas after spending much of the final quarter-hour trying to penetrate a sturdy French defence, and Les Bleus held on for three huge points.

France takes on Hungary in Sunday's early match, while Germany looks for a better result later that day against Portugal.

DAZN News provided live commentary and analysis of the match. Here's how it all went down.

facebook twitter whatsapp
That's it! The French hold on to take all three points in a thrilling match.

facebook twitter whatsapp
Can comes in for Ginter, who was struggling a few moments ago. Volland also replaces Gosens.

facebook twitter whatsapp
Mbappe is sprung free down the right-hand side and he charges into the box before squaring to a wide-open Benzema, who easily seeps the ball into the open net. However, Mbappe was offside on the inital pass and VAR rules it no goal.

facebook twitter whatsapp
If the hosts are to get anything out of this match, it'll have to come soon.

78' What a tackle by Hummels

facebook twitter whatsapp
Mbappe forces his way past the German back line 35 yards from goal and looked to be in alone on the 'keeper, but Hummels uses his angles extremely well and executes a perfect tackle inside the area to strip the French speedster at the last moment.

Gnabry, Havertz out; Werner, Sane in.

What a brilliant piece of skill by Mbappe, who curls a low shot around Neuer and inside the far post. It should be 2-0 France, but the flag has been rightly raised.

That's a let-off for Germany.

Gosens flies in to challenge for a well-flighted ball into the France 6-yard box. He doesn't make contact but manages to thump into Pavard, who remains down on the pitch for a moment or two.

Along the way, Gosens stopped a seemingly goal-bound German shot as he lie on the French goal line, being called offside in the process.

facebook twitter whatsapp
The German attacker receives a looping pass 10 yards from goal and elects to his a side-fotted volley, which sails slightly high. That's the first real chance for Gnabry so far.

Rabiot's clean through on goal down the left side and he strides into the German area before firing a left-fotter off the outside of the near post.

Griezmann was wide open for a tap-in had Rabiot looked to his right.

facebook twitter whatsapp
The Germans get into France's box and it's Gundogan getting on the end of a ball into the goalmouth area. His off-balance volley goes wide of the far post.

facebook twitter whatsapp
After a cagey start, the goal seems to have created a sense of urgency for both sides. This is some entertaining stuff.

facebook twitter whatsapp
The German can't quite finish after his side stormed back down the field in search of a leveller.

facebook twitter whatsapp
France 1-0 Germany
French pressure results in Hummels turning the ball into his own net. Poor Neuer had no chance on that one.

An own goal gives France the early lead! #EURO2020 pic.twitter.com/zO0aoEyYih

10' Germany has the run of play so far

facebook twitter whatsapp
The home side's controlling play, but there's not much to separate the sides as Germany hasn't looked too threatening in the final third as of yet.

facebook twitter whatsapp
The German is shown the game's first yellow for a high boot in a challenge. Looked a bit harsh but the decision stands.