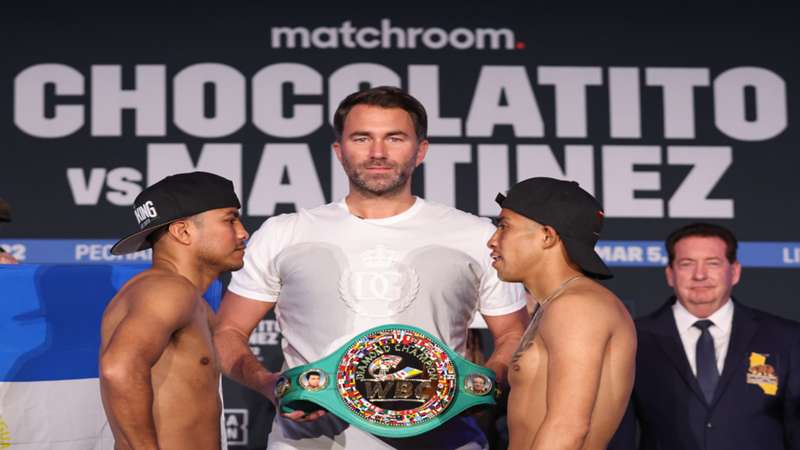 Ed Mulholland/Matchroom Boxing
Check for Chocolatito vs Martinez on DAZN

The boxing world had written off Roman Gonzalez after suffering back-to-back losses to Srisaket Sor Rungvisai in 2017.

Well, some fighters fall, some rise. Coming into Saturday's contest against WBC flyweight champion Julio Cesar Martinez, Gonzalez had won four of his last five with the defeat being a controversial split decision loss to Juan Francisco Estrada in March 2021.

Gonzalez exemplified why the Estrada fight was a rebounding moment too, as he used his precision striking to batter Martinez to win by unanimous decision (118-110, 117-111, 116-112) at the Pechanga Arena in San Diego. DAZN News scored the fight 118-110 for Gonzalez.

Martinez had a successful opening round by letting his hands go and throwing combinations. However, Gonzalez (51-3, 41 KOs) realized he could absorb Martinez's power and went to work in the second round until the final bell. Countless combinations, pounding the body, superior footwork, relentless pressure, and being the stronger of the two allowed "Chocolatito" to get back on the winning track for his fifth win out of his last six fights.

Here is what happened at Chocolatito vs. Martinez.

facebook twitter whatsapp
Gonzalez is not coasting as he's continuing to push Martinez back. Martinez misses a left. Hard left to the body and then a left uppercut upstairs from Gonzalez. He continues to stalk Martinez and throw haymakers. Martinez is giving everything he has and unloads the kitchen sink. But Gonzalez blasts a combination at the bell. Greatness. (10-9 Gonzalez, 118-110 Gonzalez)

facebook twitter whatsapp
Martinez comes out swinging, but the shots are getting blocked. Straight right down the middle and a left stings Gonzalez.

Chocolatito lands a right square on Martinez's chin. A combination from Gonzalez. Straight right sends Martinez back. Martinez looks to be on shaky legs. I don't know how he's standing. (10-9 Gonzalez, 108-101 Gonzalez)

facebook twitter whatsapp
Gonzalez continues to pound the body. Martinez has no answers. Combination by Martinez. The momentum gets halted as Gonzalez goes back to the body and delivers a straight right down the middle. Martinez has no snap on his shots. (10-9 Gonzalez, 88-83 Gonzalez)

facebook twitter whatsapp
Combination to begin the ninth for Gonzalez. Gonzalez comes forward and rips the body at will. Left gets through. What a performance by Gonzalez. (10-9 Gonzalez, 78-74 Gonzalez)

facebook twitter whatsapp
Martinez complains to his corner before the round that he's tired and his hands hurt. Gonzalez smells blood in the water. He is beginning the seventh pushing the pace and moving forward. Digging a left to the body from Gonzalez. Laser right snaps Martinez's head back. A right catches Martinez's attention. A left hand sneaks through for Gonzalez. (10-9 Gonzalez, 68-65 Gonzalez)

facebook twitter whatsapp
Double left uppercut for Martinez. Gonzalez comes back with three punches to the beltline. Two more shots to the body from Gonzalez. Eight-punch combination from Martinez. A right sends Gonzalez back. Straight right catches Martinez's attention. Left uppercut snaps Martinez's head back. One-two from Gonzalez. Gonzalez is not missing with his pinpoint accuracy. A left-right sends Gonzalez back. What an action-packed round. (10-9 Gonzalez, 38-38)

facebook twitter whatsapp
Both guys are exchanging and not backing up. Martinez is throwing more punches and landing with the cleaner shots. Gonzalez fires back, and a sharp uppercut takes its effect on Martinez. Chocolatito and Martinez are throwing caution to the wind and fighting in the phone booth. Martinez is landing more shots at this point. Can Martinez keep this pace? (10-9 Martinez, 29-28 Martinez)

facebook twitter whatsapp
As soon as the bell sounds, Chocolatito and Martinez walk right toward each other and fire off jabs. Big left hook to the body lands for Martinez. Left upstairs lands for Gonzalez. The left hand is the choice for both guys right now. Explosive combination snaps Gonzalez's head back. Chocolatito fires off a right to the gut. Great round from both guys. (10-9 Martinez)

We are expecting a war so let's go.

"Yeah, it's personal because he's talked a lot of s—," Alvarez said.

A fight between the rivals can be possible if Alvarez gets by Dmitry Bivol on May 7 and Golovkin beats Ryoto Murata on April 9.

Canelo Álvarez joins us at #ChocolatitoMartinez 🔥

Canelo is in the house

Canelo is in the building 🇲🇽👋

Lara knocks out Sanchez at the bell

Lara and Sanchez were slugging it out until the end of the fight. They were throwing one violent power shot after another inside the pocket. At the beginning of the round, Sanchez was in control, and Lara valiantly came back and put him away. Lara backed Sanchez into the corner, unloaded a series of hooks and knocked him out at the point of impact.

facebook twitter whatsapp
It's time for the co-main event of Chocolatito vs. Martinez, as Mauricio Lara (23-2-1, 16 KOs) takes on Emilio Sanchez (19-1, 12 KOs) in featherweight action.

Lara is on a good run as he beat Josh Warrington in 2021 and went to a draw in the rematch after an accidental head clash.

Not expecting this to go the distance like the first two fights on the card.

Burgos and Fierro fight to a draw

Nothing wrong with the score whatsoever. It's how you'd score it. Neither guy was able to assert dominance so you cannot complain about the scorecards.