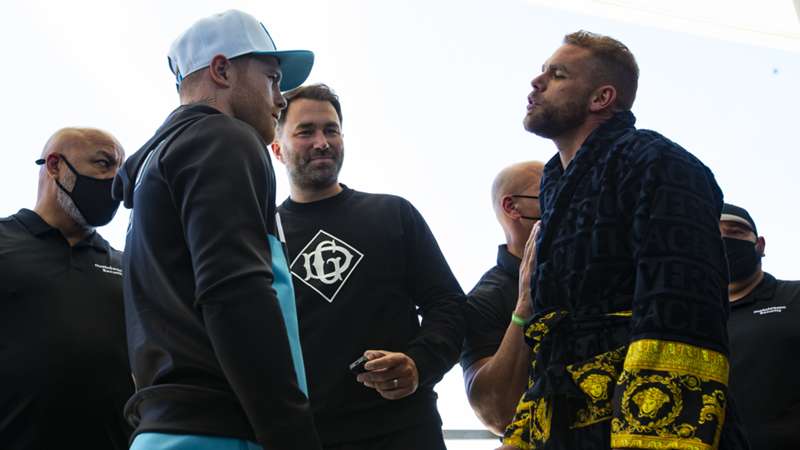 Saunders and his team wasted no time badmouthing Canelo at the face-to-face.

Saul 'Canelo' Alvarez and Billy Joe Saunders went face-to-face for the first time since their super-middleweight unification clash was announced, and tensions flared in the wake of a bizarre row over what the size of the ring will be on Saturday in Arlington, Texas.

Canelo puts his WBA, WBC and The Ring belts up against the WBO version currently held by Saunders in what could be the penultimate step ahead of an undisputed champion being crowned later this year if the winner goes on to face IBF champ Caleb Plant.

The bout airs live on DAZN everywhere across the globe except Mexico, and Saunders' father was quick to taunt Alvarez at the official face-to-face photo opportunity.

Saunders' father shouted at Canelo: "You are facing defeat, young man, in the eyes."

Saunders himself then warned Alvarez: "You've never been in the ring with someone like me. You've never seen anybody with this [pointing to his heart]."

Canelo often chooses to keep his use of English minimal for effect, and that was certainly the case as he responded to his upcoming opponent with: "You are going to see."

He was then held back by his trainer Eddy Reynoso, Saunders repeated to him: "Walk away, walk away."

As many as 70,000 fans will be inside the AT&T Stadium for the fight, as COVID-19 restrictions begin to ease in parts of the world.

To watch the fight unfold live, as well as the Thursday press conference and Friday weigh-in and a host of exclusive interviews, classic fights, documentaries and even more live events, subscribe to DAZN now. (Note: Canelo vs. Saunders is not on DAZN in Mexico, and fans in Argentina, Chile and Colombia must subscribe via the DAZN app on a wide range of devices).