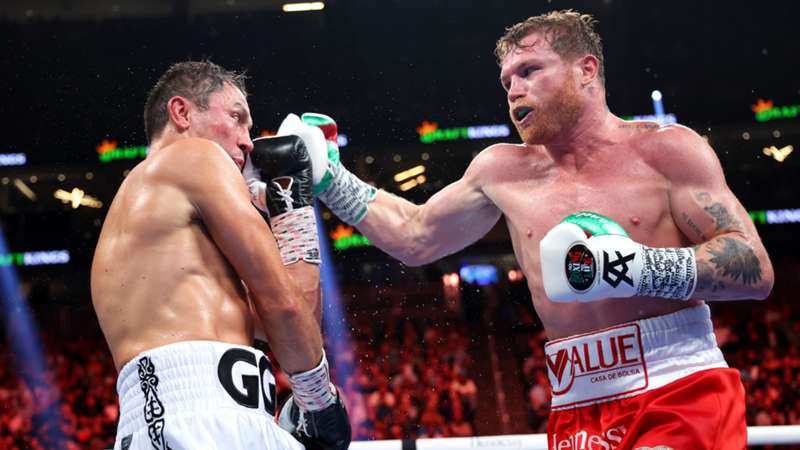 Ed Mullholland/Matchroom
Check your region for Canelo vs. GGG 3 on DAZN

Canelo Alvarez puts a definitive end to his rivalry with Gennadiy Golovkin.

The score between Canelo Alvarez and Gennadiy Golovkin was going to be settled one way or another on Saturday night.

Alvarez put a stamp on boxing's most bitter rivalry in recent memory, dominating Golovkin from start to finish with his speed and power to win by unanimous decision (116-112, 115-113, 115-113) to remain the undisputed super middleweight champion from T-Mobile Arena in Las Vegas. DAZN had the scores differently, with Canelo winning 117-111.

After the fight, Canelo and GGG met in the middle of the ring, ending their feud.

Canelo and GGG embrace in the middle of the ring 👏 #CaneloGGG3 pic.twitter.com/MCe21KTCUa

"I'm glad to share the ring with him," Alvarez told DAZN's Chris Mannix in his post-fight interview.

Canelo came out a man on a mission to prove he was the better of the two. His shots were more explosive, his lateral movement was quicker, and the Mexican star was beating Golovkin to the draw at every turn. The fast start made Golovkin tentative and unwilling to unleash the arsenal, which made GGG at one point, boxing's most dangerous puncher. Father time had finally come for GGG.

Alvarez was moving Golovkin back, marking up his face and taking the fight like no one had ever done in the legendary career of the reigning unified middleweight champion.

By the time GGG got going in the later rounds, it was too little, too late, and the chapter was definitively closed on the Canelo vs. GGG rivalry.

What is next for Canelo? After getting surgery on his hand, the 32-year-old wants his rematch against WBA (super) light heavyweight champion Dmitry Bivol if he gets past Gilberto "Zurdo" Ramirez on Nov. 5, which takes place on DAZN .

"I will beat him," Canelo boldly said.

Here is what happened at Canelo vs. GGG 3.
0
NEW BLOG POSTS

facebook twitter whatsapp
Right hand lands for Canelo. An exchange of left hooks. Hard left to the body for Canelo. Double left by Canelo. Double left and a right to the body. A left sends GGG back. Sharp uppercut by GGG. Stiff jab and a right hand by GGG. A right by GGG. Canelo blasts a right of his own. Exciting last 30 seconds of the round. (10-9 Canelo, 80-72 Canelo)

facebook twitter whatsapp
GGG looks to have woken up. Double left and a right hand. A left hook by Canelo. Double jab by GGG. Right to the body for Canelo. Right hand lands for Canelo. Left hand for GGG. An uppercut lands for GGG. A left for GGG, but Canelo unleashes a double right to end the round. Closest round of the fight by far, but still a Canelo round. (10-9 Canelo, 70-63 Canelo)

GGG needs to be more active and in a hurry because he's entering dangerous territory. (10-9 Canelo, 60-54 Canelo)

facebook twitter whatsapp
Double jab from Canelo. A left upstairs and a left to the body by Canelo. A right hand by Canelo.

A big right from GGG. Exchange of lefts. Right sends GGG back. An overhand right shook GGG. A right to the body. (10-9 Canelo, 50-45 Canelo)

facebook twitter whatsapp
GGG back to the body. Double left for Canelo. Triple left by GGG. Straight by GGG. An exchange of jabs. Big left hook from Canelo. Left for GGG, and Canelo roars with a right.

The speed and power is evident with the advantage going to Canelo. (10-9 Canelo, 40-36 Canelo)

facebook twitter whatsapp
GGG starts the round with a jab. Exchange of jabs. A left by GGG and Canelo counters with a left of his own. Another left hook by Canelo. Redness is already starting to show on GGG's face. A stinging jab from GGG. A flurry from Alvarez punctuated by a straight right. A stinging jab from Canelo. Canelo is applying a ton of pressure.

facebook twitter whatsapp
GGG comes out with a couple of jabs. Canelo comes back with a left hand. Double jab from Canelo. Another jab by Canelo. Body shot from Canelo. A right moves GGG back. Overhand right connects by Canelo. A three-punch combo from GGG. (10-9 Canelo, 20-18 Canelo)

facebook twitter whatsapp
They didn't touch gloves after the referee instructions. Here we go. A loud roar from the crowd when they meet in the middle of the ring.

A feeling out round. GGG was too tentative while Canelo was a bit more active to get the round. (10-9 Canelo)

facebook twitter whatsapp
The undisputed super middleweight champion makes the walk to a thunderous ovation with mara, mariachi band and all.

A tougher fight than everyone expected. The consensus had been Rodriguez would run through the former world title challenger. But Gonzalez came to fight and provided a stern test for "Bam".

The right guy won even though the scores were wider than how the fight looked inside the ring.

facebook twitter whatsapp
At the end of the eighth round, referee Kenny Bayless deducted a point from Rodriguez for his second low blow. Could that play a factor as we head toward the championship rounds?

facebook twitter whatsapp
After six rounds, it is much closer than many expected. I could give the opening four rounds to Gonzalez. Rodriguez has come on in the fifth and sixth by relying on his power. Can he sustain it in the latter half of the fight?