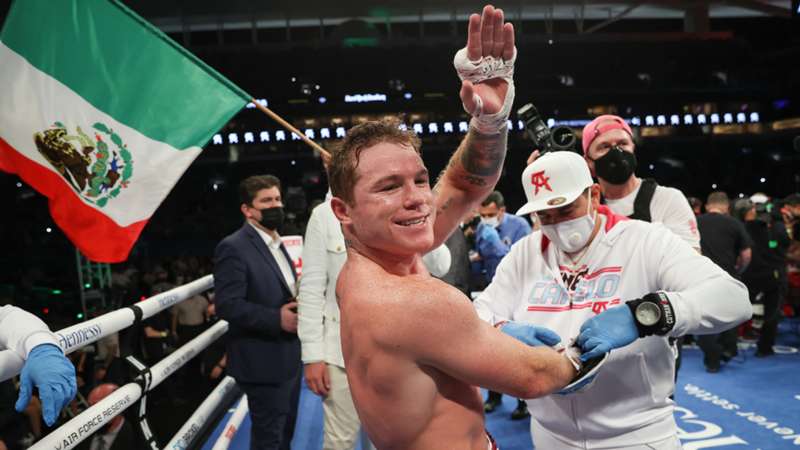 Canelo Alvarez dazzles yet again, before making a unified super middleweight championship fight with Billy Joe Saunders official for May 8.

Canelo Alvarez's goal is to become the undisputed super middleweight champion. He had the chance to continue the journey Saturday night against Avni Yildirim at Hard Rock Stadium in Miami with his WBA (super) and WBC titles at stake.

Alvarez showed why there are levels to boxing as he put on a master class, making the mandatory challenger quit on his stool in between the third and fourth round to retain his belts. DAZN News had the fight scored 30-26 for Alvarez at the time of the stoppage.

"I come here to do my job," Alvarez said in his DAZN post-fight interview through an interpreter. "I come to win, and I come to make history. I feel strong, fast, and comfortable (at 168). I'll fight anyone. I always fight the best. It doesn't matter. I had to fight against Yildirim to unify 168."

Alvarez (55-1-2, 37 KOs) let Yildirim know right away it wasn't going to be his night when he sent him back with a left hand in the first punch of the fight. From there, school was in session.

The 30-year-old did a little bit of everything. He pounded Yilidirim's body with one thunderous left hook after another. He would throw combinations, starting with a short right uppercut and punctuate the sequence with another left hook to the body or a vicious uppercut.

The end was near in the third round when Alvarez connected on a left jab followed by a laser straight right hand, which sent the Turkish challenger to the canvas. Alvarez tried to put him away, but Yildirim somehow survived. Walking back to his corner, one could sense the spirit was taken out of him.

Yildirim's head trainer Joel Diaz kept screaming at him to do something besides standing there and being a punching bag, or he would stop the fight after the fourth round if he didn't show him. Yildirim, looking dejected, didn't respond. He also didn't make it to the fourth round.

When Alvarez stood up in his corner, waiting for the round to begin, Yildirim told Diaz and his corner that he didn't want to continue.

Since losing to Floyd Mayweather Jr. in September 2013, Alvarez is 13-0-1 with seven wins via stoppage.

What's next for boxing's pound-for-pound king?

After the fight, it was announced that Alvarez would face WBO titlist Billy Joe Saunders on May 8 in a 168-pound title unification bout.

Here is what happened at Canelo vs. Yildirim.

The fight is over as Canelo retains his super middleweight titles

Canelo def. Yildirim by TKO at 3:00 of the third round to retain the WBA and WBC super-middleweight titles.

Alvarez was standing in his corner when the referee waved off the fight. After the third round had concluded, Yildirim's head trainer Joel Diaz kept telling him that he would stop it after the fourth if he didn't show anything. Yildirim wasn't responding and told Diaz he didn't want anymore.

What a performance by Canelo. You couldn't have asked for anything better.

Alvarez is clicking here and it has stymied Yildirim. A left jab and a blistering straight right hand sends Yildirim to the canvas. The Turkish fighter gets up. Canelo gets Yildirim against the ropes and unloads a combination but Yildirim counters with a left hand.

Alvarez is pouring it on, but Yildirim survives the round. He might have made it through, but how much longer will Yildirim be able to continue? He looks discouraged walking back to the corner. (10-8 Canelo, 30-26 Canelo)

The moment that secured the win for Canelo 💥 pic.twitter.com/mxofve7qMj

Like the first round, Alvarez comes out firing in the second. A left hook, right uppercut immediately followed by a right hook. What a combination. Yildirim finally throws, but Canelo slips out of the way and blasts him with another right uppercut.

Amazing sequence as Alvarez throws a short uppercut and blasts Yildirim with a left hook to the body. (10-9 Canelo, 20-18 Canelo)

facebook twitter whatsapp
The first punch of the night, a left uppercut from Alvarez, sends Yildirim back. For the rest of the round, Alvarez sets the tone by pounding the body, while Yildirim is extremely tentative. He's barely thorwing. Canelo is picking his spots. (10-9 Canelo)

A spectacular performance from musician J Balvin as he leads Canelo out to the ring with fireworks shooting into the Miami night.

J BALVIN. THAT IS ALL. pic.twitter.com/TKaxp2rUEg

It is time for the main event of the evening as Canelo Alvarez defends his WBA (super) and WBC super middleweight titles against Avni Yildirim.

Many in and out of boxing feel that this is going to be a cakewalk for Canelo.

Will Yildirim upset the apple cart? We are about to find out.

✨ @MikeTyson is here in Miami for #CaneloYildirim

Arroyo def. Rodriguez via TKO at 1:40 of the fifth round to become the interim WBC flyweight champion.

Arroyo dominated the first four rounds, including knocking down Rodriguez in the fourth. Arroyo made sure Rodirguez didn't see the end of the fifth. He got Rodriguez against the ropes and started unloading one heavy shot after another. Rodriguez's corner was ready to throw in the towel when the ringside doctor jumped on the apron and told the referee to stop it.

A good job by Rodriguez's corner in realizing their charge wasn't going to win and made sure he didn't suffer any more punishment.

facebook twitter whatsapp
Arroyo pours it in on and mixes everything up. A right hand to the body followed by a left hook to the head sends Rodriguez to a knee. Rodriguez makes the count and survives the round but appears to be only a matter of time now. (10-8 Arroyo, 40-35 Arroyo)

facebook twitter whatsapp
The jab work in the second is paying dividends for Arroyo. He's walking Rodirguez down and pounding him to the body at will and is opening things up for the uppercut. A sharp left uppercut lands for Arroyo. Rodiriguez is starting to tire as he gets stunned with a right hand. (10-9 Arroyo, 30-27 Arroyo)

facebook twitter whatsapp
Arroyo finally stops trying for the one-hitter quitter and starts throwing the jab. He throws a couple and then jumps in with a left hook. So far, Rodriguez is handling the shots from Arroyo. How long can it last? (10-9 Arroyo, 20-18 Arroyo)

facebook twitter whatsapp
Not much happening in the opening round. Rodriguez is content in trying to get Arroyo to come in, so he could counter. Arroyo starts to find a home for the left hook. Rodriguez needs to find a way to relax and get into a rhythm. (10-9 Arroyo)

It is time for the co-main event of Canelo vs. Yildirim as McWilliams Arroyo meets Abraham Rodriguez for the interim WBC flyweight title.

Arroyo (20-4, 15 KOs) had been set to face Julio Cesar Martinez for the WBC flyweight crown. But on Thursday, Martinez pulled out due to a hand injury. Rodriguez (27-2, 13 KOs) was sitting at home when he got the call to see if he'd take the fight on less than 48 hours. Rodriguez, who normally competes at 105 pounds, missed the weigh-in but made the 112-pound limit on Friday night.

Arroyo should win rather easily. But that's why they fight.

Zhang sent Forrest packing to the canvas three times in the opening rounds and arguably won the fourth. Zhang's gas tank emptied and Forrest dug down deep, fought exhaustion and landed the harder shots and stunned Zhang on multiple occasions. The point deduction on Zhang for holding in the ninth round is what made the fight a draw.

A rematch should definitely be in order.

Jerry Forrest was HYPED when he heard the decision 😤 pic.twitter.com/5dnv6gxbWG

facebook twitter whatsapp
Zhang is deducted a point in the ninth round for continually holding Forrest. Long overdue and a good job by the referee for finally taking a point away. That could change the complexion of the fight going into the final round.

facebook twitter whatsapp
After Zhang appeared to have everything under control, his cardio has failed him and now we have a fight heading into the ninth round. Forrest is also exhausted but he's now landing the cleaner shots and pressing forward.

Forrest hits the mat for the third time

Forrest lands a jab and Zhang fires a right hand which stuns him. Zhang unloads another right hand and a left sends Forrest down for the third time in three rounds. Forrest makes it up. It's time for Forrest to call it a day. He's too gutsy for his own good.

Forrest down for the second time

We are halfway through the second round when Zhang sends Forrest to the canvas for the second time with a right hook that grazes the chin. Credit to Forrest as he gets up again.

Zhang makes an exclamation point as we approach the end of the first round as he drops Forrest with a short left hand right on the chin. Forrest makes the count and survives the round.

Zhang knocks down Forrest in the first round 💥 pic.twitter.com/wzg9JBtjrw