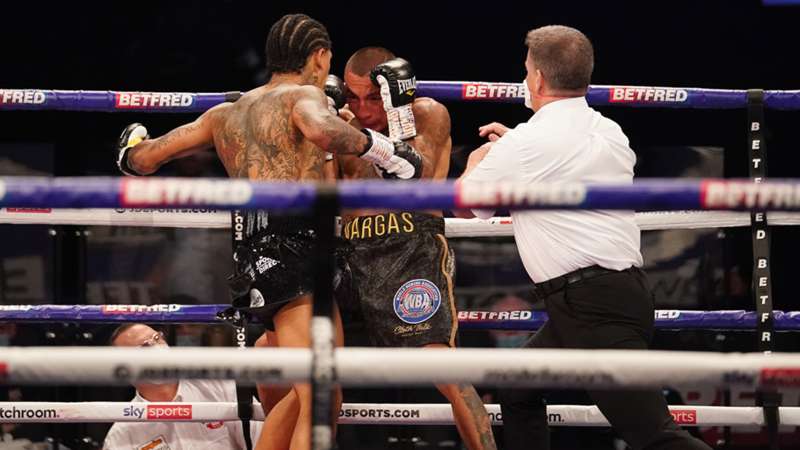 Conor Benn was expected to receive a significant test from Samuel Vargas, but instead made a mockery of many pre-fight predictions.

Conor Benn took a massive step towards the world's leading welterweights with an emphatic first round stoppage over Samuel Vargas. The Canadian had earned a reputation in the sport for providing the next generation with well needed rounds but his experience and toughness was no match for Benn’s relentless style.

Benn started the fight in quick fashion as he looked to hurt Vargas with every shot and his industry was rewarded within seconds. After hurting Vargas, Benn refused to let his man off the hook as he followed up with a barrage of punches that forced a sensible intervention.

In his post-fight interview, Benn’s name was linked to a number of high-profile fights in boxing’s talent-laden 147lbs division but he made no secret that it’s a fight with Amir Khan that he wants next.

You can read fight-by-fight highlights of the card below.

Conor Benn stuns Samuel Vargas in round one

facebook twitter whatsapp
A fast start from Conor Benn saw him hurt Samuel Vargas with his first meaningful attack. The assaults continued and the referee had no choice but to step in. An outstanding result that will make the welterweight division take notice.

It's almost time for Benn vs. Vargas

facebook twitter whatsapp
The biggest test of Conor Benn's career is moments away as he prepares to deter the threat of Canada's Samuel Vargas.

Marshall too good for Lindberg

facebook twitter whatsapp
Savannah Marshall wasted no time in defending her world title for the first time. On top from the first bell, Marshall dropped the Swede in round two before stopping her opponent in the following round.

facebook twitter whatsapp
Fight fans have already been treated to a classic from Shannon Courtenay and Ebanie Bridges. Can Savannah Marshall and Maria Lindberg provide even more action? We'll find out shortly.

facebook twitter whatsapp
After 10 hard fought rounds, Shannon Courtenay, who hurt Ebanie Bridges on several occassions, has to settle for a points win in a gruelling encounter that saw both fighters give everything. Scores were 97-94, 98-92, and 98-92.

It's almost time for Courtenay vs. Bridges

Dominant victory for Farooq who edges past brave Espinoza

Glasgow's Kash Farooq is in action next

facebook twitter whatsapp
Can Kash Farooq climb the rankings at bantamweight? He takes on Nicaragua's Alexander Espinoza for the WBC International Silver title.

facebook twitter whatsapp
It's a succesful start for Nick Campbell who uses a wide variety of attacks to stop Petr Frohlich halfway through round number two. There'll be harder tests to come for Campbell but the start of his professional journey is one to remember.

facebook twitter whatsapp
Hello and welcome to DAZN's live text coverage of Conor Benn vs. Samuel Vargas! The main card gets underway from 19:00 local time (BST in the UK), and remember: if you're anywhere in the world except the UK, Ireland, Australia, New Zealand and China, it isn't too late to watch the whole event live on DAZN! Click here for more information on subscriptions to the sports streaming service.