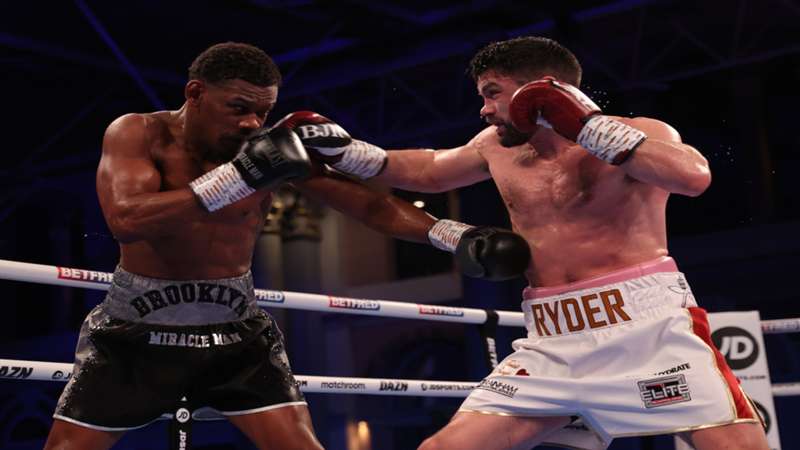 John Ryder is in the frame to compete for a world title after squeezing past Daniel Jacobs courtesy of a controversial split decision win. The Islington man has endured heartbreak on the scorecards on multiple occasions during his career, but he was on the right end of a close fight as he took two scores of 115-113 against the same result for the unfortunate New Yorker.

Jacobs, the pre-fight favourite, began the bout in impressive fashion as he turned back the clock to remind Ryder of his world-level credentials. At the halfway mark, the fight looked to be a formality for Jacobs, but Ryder had other ideas as he went about turning the battle back in his favour.

Using his famed aggressive style, Ryder began to hurt Jacobs, and there were several moments when the former two-time world champion looked on the verge of being taken out. However, despite Ryder’s best efforts, Jacobs rode out the storm and seemed to take enough rounds in the latter of the fight to put the result beyond doubt.

He was in for a shock when the official verdict was announced, and when Ryder was declared the winner, Jacobs stormed out of the ring and headed straight to his locker. The result doesn’t give him any options moving forward, but for Ryder, the big fights are still there. So he can look forward to great opportunities in 2022. In his post-fight interview, Canelo Alvarez, the undisputed ruler at 168 pounds, is who Ryder identified as his ideal next opponent.

"I'm really hoping John can lure @Canelo to a fight in Wembley" 👀@_John_Ryder_ and Tony Sims reflect on a massive win for The Gorilla #JacobsRyder pic.twitter.com/Kp1E8SwSPZ

For all updates from tonight's show, please read below.

facebook twitter whatsapp
John Ryder registers the biggest win of his career as he scores an upset win over Danny Jacobs. It appeared that Jacobs had done enough, but three scores of 115-113, two in favour of Ryder, are enough to give Ryder the victory.

facebook twitter whatsapp
Jacobs should take it. He's been smart in this final session and deterred the threat of Ryder well. 10-9 Jacobs.

facebook twitter whatsapp
Ryder needs a big finish, and he's set himself up well by taking the penultimate round. Can he maintain it and perhaps register the biggest win of his career? 10-9 Ryder.

Jacobs vs. Ryder: Round Ten

facebook twitter whatsapp
Jacobs needed to win a round, and he's done that by winning round ten. It was a much quieter round than the previous two, which suits Jacobs. 10-9 Jacobs.

Jacobs vs. Ryder: Round Nine

facebook twitter whatsapp
This fight has come alive. Both men are going for it. Jacobs is fighting to protect his lead, and Ryder is doing all he can to chip away at it. It's another Ryder round. 10-9 Ryder.

Jacobs vs. Ryder: Round Eight

facebook twitter whatsapp
Huge round for Ryder. At the end of it, he hurts Jacobs, and the New Yorker is holding on. What a turnaround. Jacobs could be on his way out. 10-9 Ryder.

Jacobs vs. Ryder: Round Seven

facebook twitter whatsapp
Ryder picks it up in the final stages of the round with a tremendous uppercut, and it creates a big buzz inside the 'Ally Pally.' Ryder has waited for a moment like that. Can he build on it? 10-9 Ryder.

Jacobs vs. Ryder: Round Six

facebook twitter whatsapp
Ryder is having more success, but it's not enough to give him a share of the round. Even though he's allowing Ryder to get closer, Jacobs is still producing the more eye-catching shots. 10-9 Jacobs.

Jacobs vs. Ryder: Round Five

facebook twitter whatsapp
It's Ryder's best round, but it's probably not enough. He's taking more risks and forcing the fight a little more, but the nicer work is coming from Jacobs. 10-9 Jacobs.

Jacobs vs. Ryder: Round Four

facebook twitter whatsapp
It's comfortable for Jacobs. Ryder has to step on the gas. This fight is running away from him. 10-9 Jacobs.

Jacobs vs. Ryder: Round Three

facebook twitter whatsapp
Jacobs is enjoying himself. The more this continues, Ryder will have to take a risk at some point. Jacobs is calling on all his high-level experience to force mistakes from Ryder, and he's punishing him more often than not. 10-9 Jacobs.

Jacobs vs. Ryder: Round Two

facebook twitter whatsapp
Another Jacobs round. The rough and busy approach that we've seen so many times from Ryder is absent two rounds in. Jacobs is doing the far better work. 10-9.

Jacobs vs. Ryder: Round One

facebook twitter whatsapp
It's a great start from Jacobs, who has landed several jabs and the occasional right hand. Ryder is fighting patiently, but it's not enough at this stage. 10-9 Jacobs.

Fisher has to go the distance against Enguema

facebook twitter whatsapp
It wasn't pretty, but Johnny Fisher did enough to earn the victory as he went six rounds with Gabriel Enguema. Fisher was cut in the first round, but he was the busier fighter throughout, which was reflected in the 59-55 scorecard.

The perfect record continues for @JohnnyFisherBox as he overcomes his biggest test with a points win 🤩#JacobsRyder pic.twitter.com/Je4A0vYQ6V

facebook twitter whatsapp
Felix Cash and Magomed have delivered an absolute classic. Cash was down in the first and final rounds and even had a point deducted, but his work throughout the contest was enough to give him the nod. This will be a huge lesson for Cash as he pushes on for more prominent honours. Madiev was identified as a threat beforehand, and that was evident in the fight, but the Wokingham man did just enough to squeeze past the rough Russian 95-92 x 2 and 94-93 on the cards.

It's a nervous time for supporters of Felix Cash. The Wokingham man is having a hard night against Magomed Madiev. The Russian fighter drops Cash in round two.

Can he get his way back into the fight?

facebook twitter whatsapp
Ellie Scotney was pushed hard by Jorgelina Guanini, but the young prospect did just enough as she emerged victorious by a narrow margin. Scotney was cut and lost a point in the final session. Despite the bout being close throughout, Scotney won 96-94 x 2, and 95-94 on the judges' scorecards to win the vacant WBA Intercontinental title.

'Ammo' impressive as he stops Maciel

Austin 'Ammo' Williams was in blistering form as he dropped the usually durable Javier Maciel three times before the referee stepped in for a sixth-round stoppage. Maciel was on the floor in the opening session, but he responded well to survive into the fight's second half. Williams stepped up the attacks in round six, and after putting the veteran Argentine on the floor twice in quick succession, the third man halted the action.

Seriously impressive performance from Ammo Williams who gets the sixth-round stoppage 🔥#JacobsRyder pic.twitter.com/uZVcqyfcVl