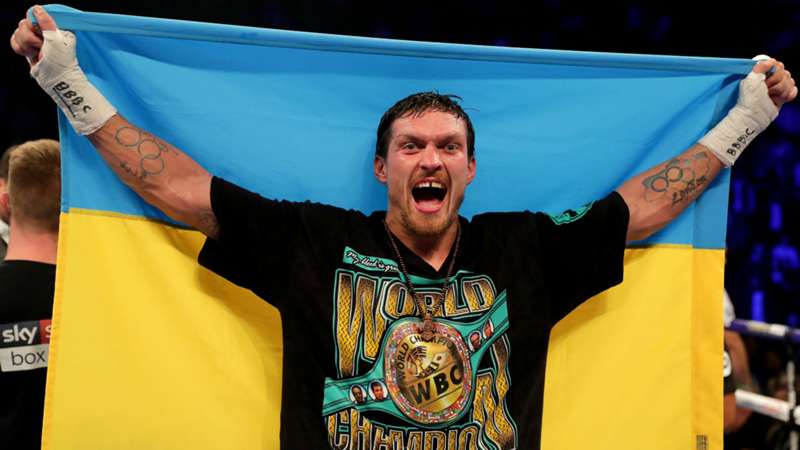 The loaded heavyweight division could require a lot of untangling in 2021.

Matchroom Boxing chief Eddie Hearn feels Oleksandr Usyk (17-0, 13 KOs) will force Anthony Joshua (23-1, 21 KOs) to vacate the WBO heavyweight title if he defeats Dereck Chisora (32-9, 23 KOs) on October 31, but remains hopeful the Ukrainian will decide to be patient and wait for the division to unify first.

Usyk and Chisora's confrontation was delayed by the coronavirus lockdown but has now been scheduled for Halloween night. Joshua, meanwhile, looks set to defend his WBA (Super), WBO and IBF titles against Bulgaria's Kubrat Pulev in December.

Another win for the undefeated Usyk would enable his team to force purse bids for a fight with Joshua, as the Brit's WBO mandatory. If Hearn wants Joshua to proceed directly to a unification megafight with Tyson Fury or Deontay Wilder following Pulev, they would have to vacate that particular version of the title if Usyk does enforce his mandatory challenger status.

During an interview with Boxing Social, Hearn admitted this could very easily happen but hopes Usyk sees the bigger picture.

“There’s been a lot of talk about ‘give up the belt,’ but the aim for Anthony Joshua is to be the undisputed heavyweight champion,’ explained Hearn.

“Will a belt gets in the way of him fighting Tyson Fury next? Probably not. Will he vacate a belt and fight Tyson Fury next? Yes, I believe he would if he had to, but would he rather maintain all the belts? One million percent.

"I know Tyson Fury has said, ‘I already had all the belts.’ I know, but you’ve never been undisputed.

“I hope that means something to people because it means a lot to Anthony Joshua if we get to a position where AJ is fighting Fury regardless of whether the WBO allows their title to be on the line.

“It’s almost like I want to go to Usyk and say, ‘Look, we’re going to vacate the title, but can we vacate it the day after the fight?’ I don’t care if the undisputed champ lasts for a day or ten years, but once you’ve won it, you’ve achieved that. In this day and age, it’s challenging to stay undisputed.

"Terence Crawford had the best idea and the best example. He won the undisputed championship against [Julius] Indongo, and a day after, he had to give up two belts. I’m going to continue to work with those guys and be honest with them."

The allure of being the first in line to challenge for all of the belts if they can indeed be unified in 2021 would surely be a tempting proposition for Usyk, but with early Joshua-Fury negotiations centering around a two-fight deal, it would probably be a long wait unless a Pulev or Wilder were to upset the apple cart and bring discussions back to square one.

As a result, many expect Usyk, who unified the cruiserweight division via the World Boxing Super Series in 2018 before retiring Britain's Tony Bellew in his only defense before moving to heavyweight, to target adding a world title at a second weight class to his resume at the earliest convenience before looking at fights against other maximum-weight champions after that.