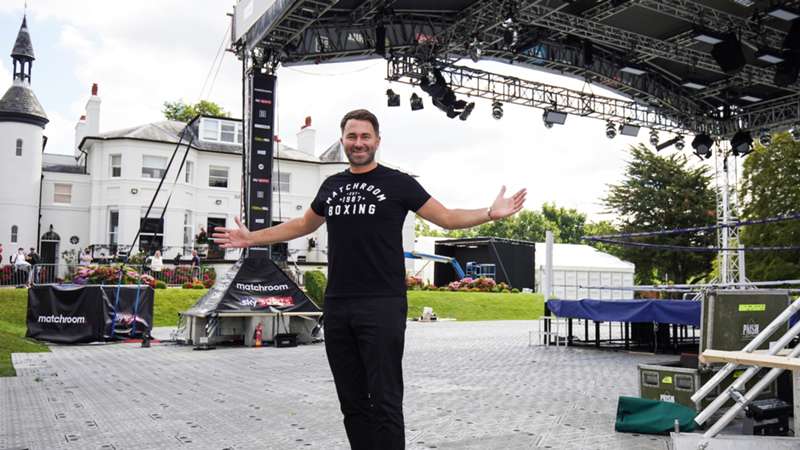 Exclusive: The Fight Camp concept helped Eddie Hearn and Matchroom bounce back from the COVID-19 lockdown. Now, the second instalment will serve as the start of their five-year deal with DAZN in the UK.

One year ago, Matchroom Boxing chief Eddie Hearn ended a months-long absence of live boxing due to the COVID-19 pandemic with a unique and ground-breaking concept.

Fight Camp took place over four August weekends in 2020, without a single fan in attendance due to lockdown protocols. Nonetheless, the action-packed series finally ended the drought that began that March, delivering a number of intriguing match-ups that would have been held back for a further 6-12 months if not for the virus.

With the news that Matchroom will exclusively air on DAZN in the UK and Ireland, starting with the return of the Fight Camp concept on July 31, August 7 and August 14, it was confirmed that Hearn’s proclamation last summer that the idea would be back this year, with fans welcomed onto the promotion’s Brentwood grounds for the shows this time around.

Hearn told DAZN that he intends to make Fight Camp an annual tradition, and that it is an even bigger part of his legacy as a promoter than the huge, money-spinning spectacles put on at Wembley Stadium and in huge arenas across the United States.

“We’re very proud of Fight Camp,” said Hearn. “Despite all the other huge events we’ve put on across the globe, it was probably our proudest moment.

“It came out of a national disaster in COVID-19 and the inability to do what we love to do: fill up arenas, create amazing atmospheres and incredible live spectacles. The challenge of the first Fight Camp was one that we will never forget but one that we learned so much from.

“We always expect these things to be successful, but I was shocked by how much of a success the project was. When I was there last year, I was thinking ‘imagine if we could get fans up there, build a couple of tiers, have a barbeque area, we could have a bigger ring walk, more fireworks, more drones…’

“Last time, the cards were good, but we had a limited budget to work with and we had to throw in a PPV event as well. A lot of the fights you saw headlining last time, though they were fantastic fights such as Cheeseman vs. Eggington and Harper vs. Jonas and Cash vs. Welborn, this year’s Fight Camp will be on a whole new level in terms of the cards and the main events.

“The entertainment, the presentation, everything will be souped up for the 2021 Fight Camp. Even though we’ve only done one so far, we’re really hoping to make this a bit of a flagship event for Matchroom Boxing.

“The value we had as a business through creating Fight Camp was second to none because the world was watching, with no live events, or only a few events in a studio somewhere in a cul-de-sac. All of a sudden, we came out with fireworks blazing, electric ringwalks, in our garden at our HQ.

“And the reception we received, even though we lost a lot of money, was great for our business even if not profitable.This year, again, it won’t be about making a lot of money. We will be investing it all into the production and the fighters.

“It’s important for us to kick off this new DAZN relationship with three stacked cards, back-to-back-to-back, and at £1.99 a month in the UK you are ultimately paying about 66p or whatever it is for each Fight Camp card.

“This is our opportunity to say 'welcome to DAZN', and tell fans this is what we are bringing you. Come on board and be part of this experience.

“It’s something we hope to do every year, and it’s a huge priority to us as a business.”