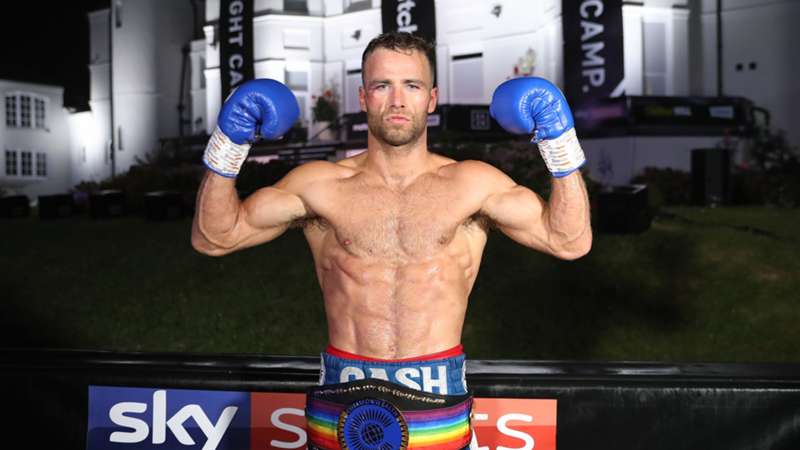 Felix Cash defends the Commonwealth middleweight title in the main event of the third unique boxing card staged in Eddie Hearn's back garden.

Felix Cash delivered the performance many expected as he broke down Jason Welborn over five rounds of their 12-round contest Friday for Cash's Commonwealth middleweight championship.

Cash moves to 13-0 with his ninth victory inside the distance, despite being deducted a point for shots landing below the belt of the challenger moments before a pair of knockdowns prompted Welborn's corner to throw in the towel.

With the challenger being stopped by body blows in his previous two fights, Cash saw the risk of going low as a necessary evil in an otherwise-flawless gameplan.

"It was a decent performance," Cash said after the fight. "I got my range after about a round, and then it was a matter of time before I broke him down and got the job done.

"I could hear him making little noises as I was hitting the body shots. I know I was hurting him. He was wincing, he was complaining. A couple were a bit low but most of them weren't.

"I reckon I'm the best middleweight in the country. I'm ready for anyone now."

Though Cash would like to take on his compatriots — including Welshman Liam Williams — promoter Eddie Hearn thinks the European championship is the next logical step.

Hearn said: "Credit to Welborn. He's tough as old boots and wanted to get down the stretch, but he couldn't handle the power of Felix Cash.

"It's time to push on now. He's ready for all the domestic fights, but I think he's ready for the European title."

Though Cash's routine win wasn't on the same level of the previous two main events at Fight Camp, more thrills could be found at the top of the undercard.

Zelfa Barrett (24-1, 15 KOs) was behind on the cards to Eric Donovan (12-1, 7 KOs) before he rallied in the seventh round of an action-packed encounter, scoring two hard knockdowns before taking Donovan's '0' with a vicious left hook in the eighth to win the vacant IBF Intercontinental super-featherweight title.

And Shannon Courtenay also suffered her first pro defeat despite appearing to do enough to bounce back from a first-round knockdown by opponent Rachel Ball.

Courtenay moves to 5-1 following a decision loss in her first foray to eight-round contests against Ball, whose record now reads 6-1.

Round 5: Early on in the fifth, Cash is deducted a point for more shots going below the belt. His shots are starting to do more and more damage, however, and he knocks Welborn down halfway through the round before another 30 seconds later prompts the towel from his corner. Cash goes 13-0 with his ninth KO win.

Round 4: The champ continues his fine work and is opening up his advantage on the cards, one would imagine. Welborn will be hoping frustration sets in from the fifth or the sixth. 10-9 Cash, 40-36 overall

Round 3: Cash begins to increase the pressure, but Welborn continues to peel off just enough shots to avoid being overwhelmed for now. Cash is also warned by the referee to keep his body shots up. 10-9 Cash, 30-27 overall

Round 2: More of the same in the second. Welborn has his moments as he picks his spots to show aggression, but again superior ring generalship and cleaner lands from the champion. 10-9 Cash, 20-18 overall

Round 1: Welborn isn't here to just roll over — he comes forward a couple times and lands well in the opening three minutes. Nonetheless, that's a Cash round as he shows the style and class expected of him. 10-9, Cash

10:20 p.m.: It's almost time for the main event. Felix Cash (12-0, 8 KOs) defends the Commonwealth middleweight title against veteran challenger Jason Welborn (24-8, 7 KOs) in what many expect to be a showcase for Cash ahead of his move beyond the domestic realm.

10:05 p.m.: A great fight ends when Barrett, who was behind on the cards with Donovan seemingly growing in stature with each round, blitzes Donovan with two knockdowns in the seventh. In Round 8, Barrett continues to land hard, punishing shots until a left hook drops Donovan and the referee calls off the count. That's Barrett's 15th KO and the end of Donovan's unbeaten record. What an introduction to life under the Matchroom umbrella for Barrett!

Ball with 8-round decision over Courtenay

9:20 p.m.: Great fight between Courtenay and Ball. Courtenay was on top of most of that, but walked onto a knockdown shot in the first and faded a bit in the final couple of rounds, so it may be a tight call. After eight all-action rounds, we go to referee Howard Foster's scorecard ... it's 77-75 Ball! Wow. Can't say I saw that coming. It certainly felt like Courtenay did more than enough to pull back that 10-8 from the first.

Conway with 10-round unanimous decision over Mansouri

8:45 p.m.: Conway takes the decision here and is the new WBA Intercontinental super-welter champ. He gets the unanimous decision (99-92, 98-92, 98-92). Credit to Mansouri, who dug deep to resist a TKO more than once and, given his circumstances to return to the domestic scene, will see that as a decent enough result for his own career.

7:40 p.m.: Another win for Docherty, as he moves to 9-0 with his seventh win inside the distance after stopping Fox in the seventh. He dropped Fox in the third, though it looked like it may have been more of a slip. Nonetheless, Fox was saved by the bell at the end of the sixth before Doc dropped him properly in the seventh, and it was waved off by Howard Foster moments later, a minute and two seconds into the round.

7:10 p.m.: First up is John Docherty (8-0, 6 KOs) vs. Anthony Fox (8-12-4, 0 KOs), in eight rounds of super middleweight action. Many expect this to be a development fight for Doc, who would really benefit from some rounds in the process.

7:00 p.m.: Hello and welcome to DAZN's live coverage of Matchroom Fight Camp 3! The first two weekends of live action at Matchroom's Mascalls HQ were enjoyable and featured excellent main events. Will Felix Cash and Jason Welborn make it a hat-trick?