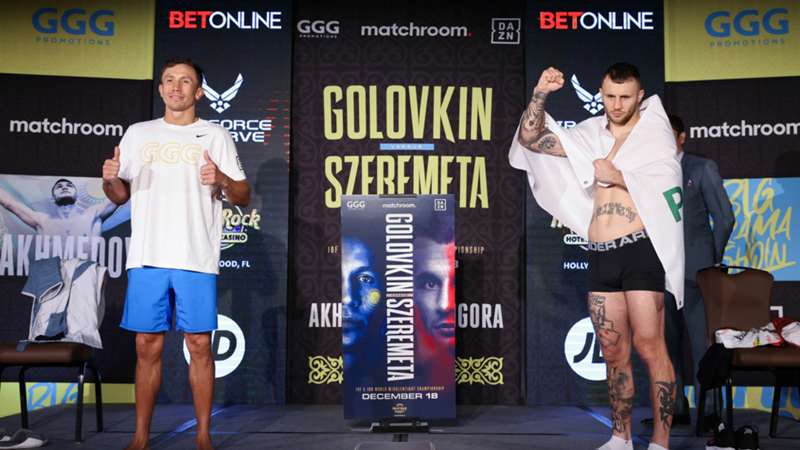 It wasn't a question if Gennadiy Golovkin would beat Kamil Szeremeta to break the middleweight record for most title defenses. It was what round would Golovkin get Szeremeta out of there.

After sending Szeremeta down to the canvas four times, the referee stopped the fight before the eighth round began to give Golovkin the win by seventh-round TKO to remain the IBF middleweight champion at the Hard Rock Live at Seminole Hard Rock Hotel and Casino in Hollywood, Florida. The victory is the 21st title defense of a 160-pound title for Golovkin, breaking the tie with Bernard Hopkins.

Golovkin (41-1-1, 36 KOs) set the tone from the opening bell and let Szeremeta know there's no way he's going to win. He reverted back to pumping the jab and not letting Szeremeta get within distance of trying to counter with anything significant. With the clock ticking down, Golovkin flung a left hook to drop Szeremeta for the first time.

Golovkin changed things up a bit in the second as he started throwing power shots off the jab. Those punches began taking their toll on Szeremeta, and Golovkin took advantage and connected on an overhand right to send the native of Poland to the mat for the second time.

Szeremeta (21-1, 5 KOs) had no answer for what Golovkin brought on this night. He didn't have enough power on his fastball to put any doubt in his mind. After knocking Szeremeta back on his butt in the fourth round, Golovkin began throwing multiple punch combinations that battered Szeremeta. The punishment took its toll on Szeremeta as he got sent packing for the fourth and final time with a double jab. Seeing that there was no way Szeremeta would win, the referee put him out of his misery, and Golovkin made history.

Now that Golovkin returned with a "Big Drama Show", the question is now what's next? Fans want to see GGG-Canelo Alvarez 3. Golovkin refused to bring it up at all during fight week. He says he will have a keen eye on Alvarez's fight against WBA (super) super middleweight title clash with Callum Smith on Saturday from the Alamodome on DAZN (except for Mexico).

"I'm open for anybody," Golovkin told Todd Grisham in his post-fight interview. "Best opponent for me.

"We will wait for tomorrow. I hope tomorrow is a great event. The best will win. I'm open."

Here is what happened at Golovkin vs. Szeremeta.

GGG gets it done with stoppage win over Kamil Szeremeta

facebook twitter whatsapp
Gennadiy Golovkin def. Kamil Szeremeta via TKO at 3:00 of the seventh round to retain the IBF middleweight title. Before the eighth round began, the referee walked over to Szeremeta's corner and decided the native of Poland could no longer continue. Golovkin breaks the record for most middleweight title defenses at 21.

facebook twitter whatsapp
How is Szeremeta standing? Golovkin comes out continuing the onslaught and drops Szeremeta for the fourth time with a double jab. Golovkin is making it look rather easy. You have to wonder when Szeremeta'a corner going to stop it as their charge has no shot to win. (10-8 Golovkin, 70-59 Golovkin)

facebook twitter whatsapp
Szeremeta might be durable but that's all he is. Golovkin was fighting in spurts to begin the round but as we got to the latter half, he decided to start throwing four, five and six punch combinations. Golovkin is clicking on all cylinders. (10-9 Golovkin, 60-51 Golovkin)

facebook twitter whatsapp
Golovkin is relentless. He's not giving Szeremeta much room to breathe and react. Funny that Golovkin's trainer Jonathon Banks told him that it's up to him when they can go home. Will Golovkin heed the advice? (10-9 Golovkin, 50-42 Golovkin)

facebook twitter whatsapp
Golovkin is looking fantastic and on point. He's blasting the jab, showing good footwork and great accuracy. With about a minute left in the round, Golovkin sends Szeremeta back to the canvas with a right hand followed by a short left hook. Szeremeta has no answer at this point. You have to think his corner is starting to think about stopping it. (10-8 Golovkin, 40-33 Golovkin)

facebook twitter whatsapp
We are seeing much of the same in the third round but Golovkin has the look of someone whose trying to blast Szeremeta out of there. At least Szeremeta didn't knocked down this round. (10-9 Golovkin, 30-25 Golovkin)

facebook twitter whatsapp
Golovkin comes right out going right back to jab but is also using the uppercut right after it. He's starting to throw more right hands which is making Szeremta gun shy to come and attempt to counter. With 40 seconds remaining, Golovkin drops Szeremeta again, this time with an overhand right. Szeremeta looks shaky on the feet but the referee allows the fight to continue. Let's see what Szeremeta can do to make a comeback. (10-8 Golovkin, 20-16 Golovkin)

facebook twitter whatsapp
After pushing Golovkin back with a jab to begin the fight, "GGG" is blasting one jab at a time. In the final minute, Golovkin starts landing the right hand over the top. With seconds remaining, Golovkin landed a hard right uppercut. Szeremeta threw a shot but Golovkin ducked and dropped him with a left hook right before the bell. Szeremeta made it up and looked to be ok. (10-8)

It's time for the main event as Gennadiy Golovkin (40-1-1, 35 KOs) defends the IBF middleweight title against Kamil Szeremeta. If Golovkin wins as expected, he'll break the record for most defenses at 160 pounds with 21.

Can "GGG" get it done or can Szeremeta shock the world? We are about to find out.

Choi def. Silgado by unanimous decision (99-91, 98-92, 97-93) to retain the WBA super featherweight title. A fun action fight. Even though women's boxing is only two-minute rounds, Choi and Silgado threw over 900 punches.

The key came down to Choi was the more active of the two and landed more power shots. Silgado came back in the final three rounds when she decided to let it go. Too little, too late.

facebook twitter whatsapp
It is time for the co-main event of GGG vs. Szeremeta as Hyun Mi Choi (17-0-1, 4 KOs) faces Calista Silgado (19-11-3, 14 KOs). Silgado cannot win Choi's  WBA Women's Super Featherweight title because she came in 1.4 pounds overweight. If Choi loses, she will lose the belt and become vacant.

Coming off an action-packed fight between Carlos Gongora and Ali Akhmedov, Ryder and Guy decided they wanted to give fans a break and fought at a snail's pace. Ryder was the more active of the two while Guy decided he'd treat it as a sparring session and not do too much.

A win is a win and that's all you can ask for from Ryder.

Is it over yet?

facebook twitter whatsapp
Heading into the sixth round, John Ryder is well ahead of Michael Guy. Ryder is trying to force the action while Guy is happy to just be in there. Guy's not engaging at all and continues to back himself up to the ropes.

Gongora def. Akhmedov via knockout at 1:57 of the 12th round.

Akhmedov was ahead on all three judges' scorecards going into the final round of the all-action affair. Even though he was up, Akhmedov came into the round bloodied, battered, bruised, and had exhaustion written all over his face. Gongora sensed he could do some damage and sent Akhmedov to the canvas with a left uppercut 54 seconds into the round. Akhmedov made the count but was on shaky legs. He tried to hold on and survive. They were fighting on the inside when Gongora threw another short left uppercut to send Akhmedov and pull off the massive upset and the latter his first career loss.

According to CompuBox stats, Gongora and Akhmedov threw a combined 1,523 punches.

GONGORA DROPS AKHMEDOV IN THE 12TH ROUND TO WIN IT! pic.twitter.com/6ufm5TzOzY

facebook twitter whatsapp
Welcome to DAZN News' live coverage of Gennadiy Golovkin's potential record-breaking 21st middleweight title defense as he takes on Poland's Kamil Szeremeta. Grab the refreshments, kick back on the couch and enjoy all the action.