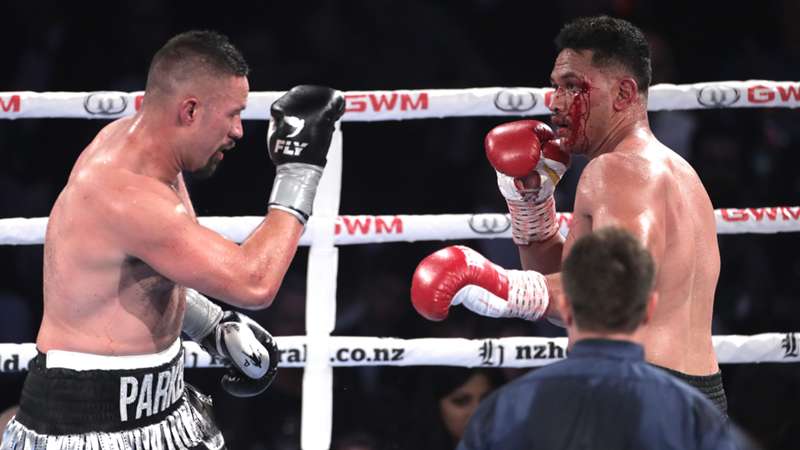 Joseph Parker was the winner in the big all-New Zealand heavyweight clash, though the scorecards did not tell the entire story.

Joseph Parker moved closer towards another world heavyweight title challenge after claiming a unanimous 12-round decision over Junior Fa at the Spark Arena in Auckland, New Zealand on Saturday.

At the site of his WBO heavyweight title victory in late 2016 over Andy Ruiz Jr., Parker spent most of the contest looking extremely frustrated as Fa looked to clinch whenever his more experienced opponent tried to string together some offense.

However, the tactic gave Fa, ranked fifth by the WBO heading into this contest, some legitimate rounds as he combined spoiler tactics with some good footwork and some decent punches of his own.

DAZN.com had the fight even at 114-114, six 10-9 rounds apiece after 12. However, the three ringside judges seemed far more taken by Parker's endeavour than Fa's ability to frustrate and chip away.

Parker was judged the winner by scores of 119-109, 117-111 and 115-113. Two of those three cards seemed excessively wide to the majority of spectactors across the world watching via DAZN.

Nonetheless, Parker's win reinforces his hopes of once again challenging for the belt he held until suffering the first loss of his career to Anthony Joshua. With Joe Joyce and Oleksandr Usyk set to battle for the interim WBO title this year amid rumours the winner will be elevated to full champion after Joshua and Tyson Fury have unified in their megafight, the path to another challenge may be coming together.

"Junior and his team did a great job," said Parker (now 28-2, 21 KOs) after the fight. "They came here to fight and it was a lot closer than we expected. We're going to talk now to see who is next for us.

"Fa put on a great performance and had a great team behind him. That showed the ring rust, after over a year. Thank you to everyone for coming tonight."

Fa, now 19-1 with 10 KOs after his first professional defeat, was gracious in defeat despite the questionable scorecards.

"Thank you to everyone for showing up today," he said. "I hope you guys enjoyed it. I, for one, loved it.

"I didn't get caught by too many punches. The cut was from an elbow. I felt fine in there and it did wonders for my confidence to be in there with such a world class boxer."

For full round-by-round coverage, re-live our live blog below.

facebook twitter whatsapp
"Junior and his team did a great job. They came here to fight and it was a lot closer than we expected. We're going to talk now to see who is next for us. Fa put on a great performance and had a great team behind him. That showed the ring rust, after over a year. Thank you to everyone for coming tonight."

facebook twitter whatsapp
"Thank you to everyone for showing up today. I hope you guys enjoyed it. I for one loved it. I didn't get caught by too many punches. The cut was from an elbow. I felt fine in there and it did wonders for my confidence to be in there with such a world class boxer."

facebook twitter whatsapp
109-119, 113-115 and 111-117 all in favour of Joseph Parker. Oh dear. Remember when punches actually landing on the opponent were a key factor in deciding winners of rounds?

Last Stylebender in the house

facebook twitter whatsapp
UFC star Israel Adesanya, New Zealander and Nigerian, enters the ring to an ovation as we await the scores to be tallied.

facebook twitter whatsapp
A good final round as both fighters, tired and knowing surely that this one is going to be tense on the cards, open it up near the beginning and at the very end. Fa just got the better of the good shots there, and I find myself sat poised on the fence at 114-114. This will come down to what the judges preferred: the astute tactics by Fa to pick Parker off, or the aggression and enterprise of the former world champ.

facebook twitter whatsapp
Junior Fa has only ever gone the distance in 10-rounders before this, while Parker had a swing of five straight 12-round decisions during his world championship fights. This is where that experience could prove vital. And indeed, it's a good round for Parker in the 11th. He goes into the final round up by one on my card.

facebook twitter whatsapp
Another round where Fa's gameplan pays off. He is tying Parker up until the fight suits him, and getting in some decent clean lands when it does. Fa concludes the stanza with a flush right to the face, which Parker takes well to his credit, and I've got this at five rounds each with just two left.

facebook twitter whatsapp
It was an errant forearm from Parker as Fa evaded another wild swing that drew blood on Fa's brow, by the way.

facebook twitter whatsapp
Not much of a round. Break in action as Fa has his wrist tape cut, then it's more of Fa's hold and clip. Junior is bleeding from the eye, however, and Parker finds a decent combination towards the end of the round to edge back in front 86-85.

facebook twitter whatsapp
Better offensive round by Parker, but whenever he finds decent contact he rushes in for a killer combo and right back into Fa's trap of picking him off at angles or clinching to neutralise. Parker's round, nonetheless, and I've given it four apiece so far. Four more to come.

facebook twitter whatsapp
Fa is using clinches to stop any attempts by Parker to go to work on the inside, and is utilizing his reach and feet to ruffle his opponent's feathers. Fa is edging this now by 4-3 in rounds. It's a close fight, though, and comes down to what you like.

facebook twitter whatsapp
Fa's best round of the fight so far. Landing nice combinations throughout the three-minute spell, and though Parker doesn't look particularly hurt by any of them, he is cutting a frustrated figure right now. Parker finally got some decent shots in towards the end but that's 10-9 Fa and 57-57 at the halfway stage.

facebook twitter whatsapp
Not a pretty round. Plenty of clinches and legs starting to slow on both. Parker connects with a couple of decent lefts on the inside to edge this one and lead it by three rounds to two.

facebook twitter whatsapp
Fa's corner urged him to slow things down and box calmer in this fourth, and he did exactly that, establishing a jab of his own and reducing Parker to a few wild lunges for a big money shot. Many feel that shot from Parker will come, but in the fourth he didn't see a lot come off. It's even after four, 38-38.

facebook twitter whatsapp
Cracking round as the two trade big shots, but it's Parker who has Fa in hot water halfway through the round. He's unable to go in for the kill, but he does move ahead in the fight 29-28 after three.

facebook twitter whatsapp
Fa certainly looks up for this, the biggest challenge of his career so far, and has the footwork to back up his intent. However Parker is starting to locate the jab and that could be key for him here. 10-9 Parker and we're at 1-1 in rounds through two.

facebook twitter whatsapp
The fight starts off scrappy, with Parker finding some early lands but also getting caught coming in a few times, before a neat left from Fa definitely fazes Joseph late in the round. (10-9 Fa)