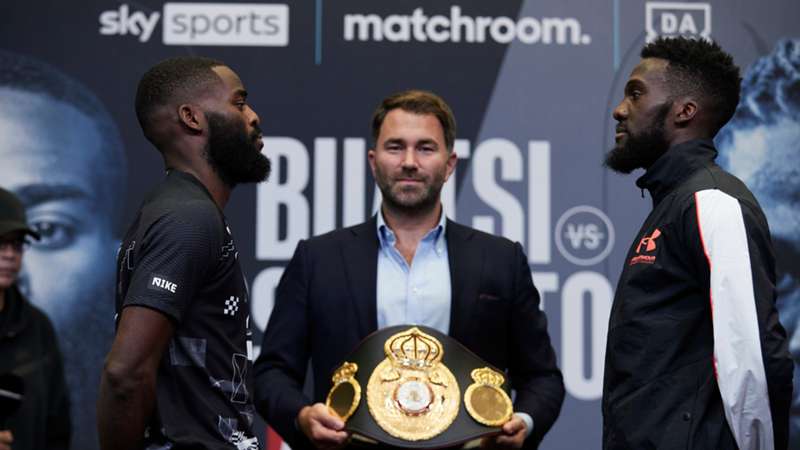 Joshua Buatsi is still a work in progress but he's ticking many boxes on his way up the rankings. Daniel Dos Santos was intended to test Buatsi but the Frenchman was stopped in round number four.

Joshua Buatsi continued his climb towards the business end of the light-heavyweight division with a stunning fourth-round knockout over France's Daniel Blenda Dos Santos. Buatsi, fighting with renowned trainer, Virgil Hunter in his corner for the first time, was in stunning form as he sent out a warning to the world's leading fighters at 175lbs.

Long identified as one of British boxing's brightest prospects, Buatsi had said all week he would impress against Dos Santos, and he carried those boasts into the ring at Manchester's AO Arena. Dominant from the opening bell, Buatsi found his range as early as the second round as he unleashed a furious assault to floor Dos Santos.

With the Frenchman in survival mode from the moment he was floored, Buatsi had to remain patient to find openings. He stalked Dos Santos with hurtful intent, and at the backend of round four, Buatsi found a brilliant right hand that connected flush on Dos Santos' exposed target.

Dos Santos was already falling off the first shot, but Buatsi landed with another punch before his opponent hit the floor. Victor Loughlin halted the fight immediately as a nervous wait ensued for Dos Santos to return to his feet. Once he did, he was consoled by the victor who's surely now ready to test himself against the world's best light-heavyweights.

For a full recap of what happened on on Joshua Buatsi vs. Daniel Blenda Dos Santos, please read below.

facebook twitter whatsapp
It's all over in round number four. A well-timed right hand from Buatsi sent Dos Santos downwards but the Croydon fighter was able to land another right hand to his stricken opponent. It was a stunning finish to a fight that Buatsi controlled from start to finish. Bigger fights await the Olympic bronze medal winner.

Round 3: Buatsi vs. Dos Santos

It's all Buatsi as he continues to put the pressure on Dos Santos. The Frenchman is often finding himself on the ropes, and that's when Buatsi increases his assaults. The highlight of the round is Dos Santos shoving Buatsi to the ground, which provoked a stern response from the home fighter. 10-9 Buatsi.

Round 2: Buatsi vs. Dos Santos

facebook twitter whatsapp
A barrage of punches sends Dos Santos down in round two. Rather than go on the attack, Buatsi remains patient and takes his time. Dos Santos is desperate whenever Buatsi gets close. 10-8 Buatsi.

Round 1: Buatsi vs. Dos Santos

Buatsi takes the centre ring from the start. The Croydon man is stalking and using his jab well. Dos Santos has done nothing apart from keeping his gloves high. 10-9 Buatsi.

Joshua Buatsi vs. Daniel Blenda Dos Santos is up next

facebook twitter whatsapp
Tonight's main event is just moments away as Joshua Buatsi gets ready to take on France's Daniel Blenda Dos Santos. Can the 2016 Olympian send out a big message to the 175lbs division?

facebook twitter whatsapp
Lerrone Richards went through his wide repertoire of skills to completely outclass Italian veteran Giovanni De Carolis on points. It was an easy night's work for Richards who took a wide verdict with scores of 120-108 x 2, and 119-109.

Wow. What a fight. Jason Cunningham, a huge underdog, drops Gamal Yafai three times on his way to a points decision win to become the new European champion with the official scores reading 115-110, 114-111, and 114-111.

No one gave Jason Cunningham much of a chance against Gamal Yafai, but he’s managed to score a second-round knockdown. It's all action in this one.

The end comes in round six as Tommy McCarthy steps it up. Alexandru Jur takes another left hook to the body, and he fails to beat the count of referee Ian John Lewis and McCarthy keeps his European title. There's plenty of options for some exciting domestic fights for McCarthy.

McCarthy on top thanks to huge body shot

Round number four sees McCarthy find the punch he's been looking for all night. Jur shows serious courage to beat the count, but can he get back into the fight?

A brilliant display from Dalton Smith as he breaks down Lee Appleyard for a sixth-round stoppage. Smith was in control from the outset. It was a sensible intervention from Mark Lyson, who rescues the brave Appleyard. Smith becomes English champion at super-lightweight and can look ahead to bigger fights.

It was neat and tidy from Solomon Dacres against Mladen Manev. The Midlands man goes six rounds on his debut as he takes a 60-54 verdict from the referee. Huge credit must go to Manev, who was brave throughout.

Winning start for Ellis Hopkins as the action is underway

It was a dream debut for Ellis Hopkins, who got her career off to a solid start with a 40-36 points win against Borislava Goranova.