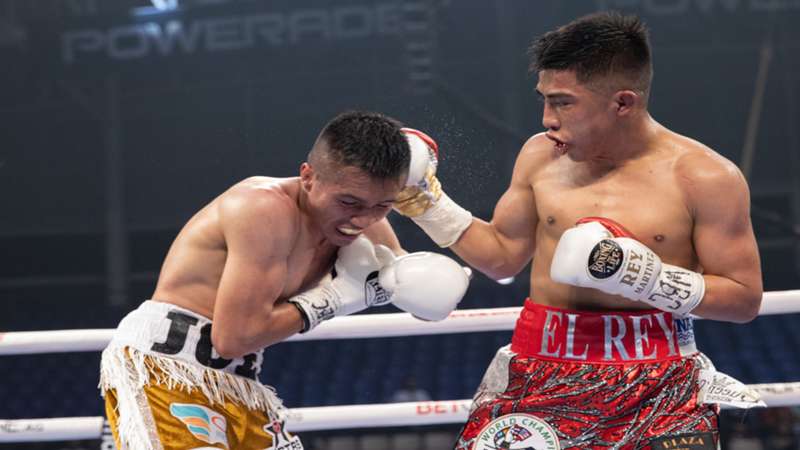 Julio Cesar Martinez closed the show in style to keep his title around his waist.

It wasn't a matter of if, but when Julio Cesar Martinez would stop Joel Cordova on Saturday night.

Cordova hung in there early, but Martinez made sure the fight didn't go longer than it had as he knocked Cordova down to the canvas at the beginning of the sixth round and closed the show moments later at the 1:00 mark to retain the WBC flyweight title from the Domo Alcade - Code Jalisco in Guadalajara, Mexico. DAZN News had the fight scored 48-47 for Martinez at the time of the stoppage.

Julio Cesar Martinez was just too much for Joel Cordova tonight.

"He was tougher than I expected. We are all here to win," Martinez said through an interpreter in his post-fight interview.

Martinez and Cordova had trained together in the past. And it showed in the early stages of the fight, as Cordova was able to avoid many of Martinez's power shots and connected on power punches of his own, including clipping Martinez in the third round.

But the champion showed what he was made of, starting in the fourth round by switching stances seamlessly and landing power shots with each hand. That started to confuse Cordova as he was getting hit harder and harder. Even though Martinez was having success, Cordova was still standing right there and fighting back.

Martinez had enough of Cordova hanging around. He came out and went right at Cordova. Martinez sent him to the ropes and then dropped Cordova with a thudding left hand. Martinez didn't waste any time and refused to let Cordova hang around. He stalked Cordova and got him to the ropes. From there, Martinez uncorked a flurry of shots and wasn't going to let Cordova out of the corner. The referee sensed the same thing and stepped right in and waved the fight off.

What is next going forward for Martinez (18-1, 14 KOs)? He plans on sticking around at flyweight to collect some more gold and unify the division.

"We’re trying to stay at the same weight," Martinez said when asked about unifying the titles.

Here is what happened at the Martinez-Cordova main card.

facebook twitter whatsapp
Martinez def. Cordova via TKO at 1:00 of the sixth round to retain the WBC flyweight title. Martinez comes out stalking and drops Cordova with a huge left hand to the chin. Cordova gets up. Cordova is trying to fight back and is throwing everything he has. Martinez gets Cordova to the ropes and closes the show. He gets him to the ropes and throws a barrage of punches at will. The referee sensing Cordova wasn't going to be able to continue, stepped in and puts a halt to the fight.

facebook twitter whatsapp
A right lands for Cordova. A left hook buckles Cordova's knees. Cordova is bleeding out of the mouth. A left uppercut followed by a left to body from Martinez. A left snaps Cordova's head back. Three-punch combination scores for Martinez. (10-9 Martinez, 48-47 Martinez)

facebook twitter whatsapp
A four-punch combination from Martinez. He throws them so quick. Double left hook by the champion. A left hook followed by a right stuns Cordova again. A right hook sends Cordova to the ropes. A body shot and a right cross by Martinez, who is getting into a rhythm. Three lefts miss for Cordova. (10-9 Martinez, 38-38)

facebook twitter whatsapp
A swing and miss from both guys. A six-punch combination from Martinez. That doesn't deter Cordova, who clips Martinez with a right hand. Hard left to the body from Martinez. A body shot by Cordova. A right stings Martinez. A left uppercut stuns Cordova. Close round. (10-9 Cordova, 19-19)

facebook twitter whatsapp
Cordova is the one coming out looking to strike. Martinez is happy to oblige with a stinging right. A left stuns Cordova, who fires off a left and then a right. An uppercut then a left hook lands for Martinez, who switches to southpaw and lands a three-punch combination. He switches back to orthodox and blasts a straight and then another right sends Cordova to the ropes. A left uppercut sends Cordova into the air. A right stings Cordova. The power is taking its effect early on. (10-9 Martinez)

facebook twitter whatsapp
It's time for the main event as Julio Cesar Martinez (17-1, 13 KOs) puts the WBC flyweight title on the line against Joel Cordova (12-4-2, one no contest, 3 KOs). Can Martinez continue his reign of terror or does Cordova pull off the upset?

It was a tale of two fights. Argumedo had control of the first half of the fight. But the champion turned it on during the second half by using his superior boxing to overwhelm Argumedo and retain his interim belt.

facebook twitter whatsapp
A wild left misses from Argumedo. A leaping left uppercut connects this time for Argumedo. A big right wakes up Matellon. A left wobbles Argumedo. But Matellon doesn't follow up. An uppercut snaps Argumedo's head back. From the looks of things, Argumedo is going to need a stoppage to win. (10-9 Matellon, 106-103 Matellon)

facebook twitter whatsapp
A body shot by Matellon. A straight right by Matellon. A right hook from Argumedo. Matellon is showing great footwork as he's making Argumedo miss and then resets to the middle of the ring and goes back to work. Two hard lefts to the body from Matellon. Those are starting to take effect. (10-9 Matellon, 86-85 Matellon)

facebook twitter whatsapp
Fatigue setting in for Argumedo. A left hook lands for Matellon. He's rolling now as another left connects. A counter right connects for Matellon. We have a fight. (10-9 Matellon, 76-76)

facebook twitter whatsapp
Matellon comes back with some solid left hooks. Argumedo fires back with three lefts to the body. Blood continues to pour down Argumedo's face. A left by Matellon. Another right connects for Matellon. A good round for him. (10-9 Matellon, 67-66 Argumedo)

facebook twitter whatsapp
A tactical round here. Argumedo is stalking but not doing much with it while Matellon is being selctive with his shots and he's making them count as he pounds four straight lefts. (10-9 Matellon, 58-56 Argumedo)

facebook twitter whatsapp
Another clash of heads and the fight is stopped. Argumedo has a deep cut on the corner of his left eyelid. Argumedo senses the fight could be stopped as he's chasing Matellon around the ring. A right connects for Matellon, who is grabbing at every turn to stop the momentum. Argumedo unloads lefts and rights as the bell sounds. It will be interesting to see what happens here with the cut. (10-9 Matellon, 29-28 Argumedo)

facebook twitter whatsapp
Argumedo comes right and pounds out a four-punch combination to the body. A left hook lands flush to Matellon's nose. Matellon needs an answer. Matellon is against the ropes and Argumedo unloads a barrage to the body and head. Matellon grabs and it appears they clash heads. (10-9 Argumedo, 20-18 Argumedo)

facebook twitter whatsapp
Matellin and Argumedo come right out and start throwing. A left hand lands for Matellon. That wakes up Aurgumedo who pounds lefts and rights to the body. (Argumedo 10-9)