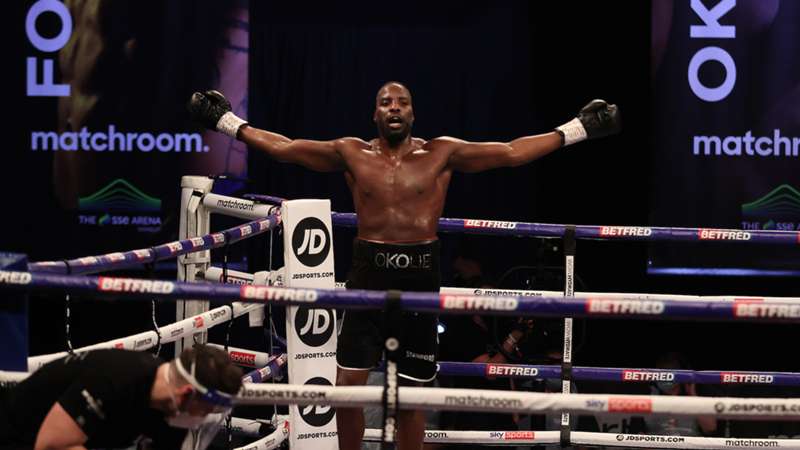 Lawrence Okolie chose the perfect time to put forth his most impressive showing to date.

London's Okolie, who moves to 16-0 (13 KOs) with his maiden world title win, had been written off by many as a difficult fighter to watch but put on a mesmerising, inch-perfect show against his toughest opponent to date. It was a champagne performance after serving up mostly tap water thus far in the professional ranks.

Poland's Glowacki, who held the WBO belt until his last fight in 2019 when he was controversially dethroned by Mairis Briedis before the sanctioning body opted to vacate the title, struggled to throw anything at all in the first three rounds as Okolie demonstrated an excellent jab to put his superior reach to full use.

In round four, Okolie turned up the heat and connected with a number of powerful shots that drastically altered the 34-year-old's body language as Glowacki realised he was in for a tough night's work if he was to earn redemption for the nature of his title loss.

And in the early stages of the sixth, Okolie connected with a flush one-two, punctuated by a devastating right as Glowacki came in with his head down. The veteran looked unlikely to answer the count, and when he did return to his feet at eight, he staggered to his corner instead of towards the referee, who completed his journey to '10''.

In his dozen-and-a-quarter professional outings, Okolie has now won the British, Commonwealth, European and a world cruiserweight title. He said after the highlight of his career that he has only just begun.

"Obviously I'm happy," explained Okolie. "I feel blessed. I was really calm throughout the week. It's amazing to be able to put an exclamation mark on my life with a world title. Anything you want in life, if you believe, you can do it.

"I have to thank Shane for the gameplan. I was sure I would get to him, but Shane reminded me not to rush. I said I'd get it done between rounds five and eight.

"Four or five years ago, Eddie Hearn saw a boy from Hackney and said 'if you win a world title, I'll buy you a gold Rolex Sky Dweller'. Now I want my Sky Dweller. And he said I'd get another one if I unify, too!"

Matchroom promoter Hearn will be close to £40,000 out of pocket when he delivers Okolie his well-deserved Rolex, but was nonetheless over the moon with the nature of his charge's victory.

"That was one of the great performances to win a world title," beamed Hearn. "Glowacki is a former two-time champ and a top five cruiserweight in the world. Lawrence has had some stick but he's stepped in there with 15 fights to his name and put on a masterclass.

"We don't want to muck around. We want to unify the division then move up to heavyweight."

Here's how the action went on the night.

facebook twitter whatsapp
30 seconds into the sixth round and Okolie finds the money shot, absolutely dazing Glowacki with a lovely combo! Glowacki staggers up at eight and walks straight to his corner instead of addressing the ref. He's done! Okolie is the new WBO cruiserweight champion!

facebook twitter whatsapp
Some crimson on the right eye of Glowacki as Okolie continues to have his way. There's a few more efforts coming from the veteran as he and his corner realise they're going to need to do something significant soon, but after five rounds it has been a shut-out thus far.

facebook twitter whatsapp
Okolie steps up the quality of his punch selection in the fourth and lands a number of powerful shots. You can see in Glowacki's eyes just how well Okolie hits. The Pole is soaking them up for now, but it's another comfortable round for Lawrence. 40-36.

facebook twitter whatsapp
That left jab of Okolie's continues to look very slick, and as Glowacki tries to throw a few serious shots the Brit does a good job of evading most of them. A very encouraging start from the Londoner, patient and to his own strengths. 30-27.

facebook twitter whatsapp
Glowacki almost certainly sees the middle or later rounds as his path to victory, here. Once again, he throws very little and focuses on making himself very awkward to land on. Okolie connects with a few good shots and is two rounds up, but there's a long way to go.

facebook twitter whatsapp
Okolie works the jab for much of a tentative first round, mixing in a couple of decent body shots as well. Glowacki doesn't throw much in that opening three minutes, as Okolie's reach looks like it will be as big a mountain for the Pole to climb as many predicted. 10-9 Okolie.

It's time for the big one

facebook twitter whatsapp
Okolie. Glowacki. The vacant WBO cruiserweight title will be decided next in a truly intriguing match-up.

facebook twitter whatsapp
It's 96-96, 98-93 and 96-95, giving Joe Cordina the win via majority decision. Definitely closer than he would have liked, but to end the lengthy absence and get back in the groove was definitely the primary goal in that one.

We go the distance

facebook twitter whatsapp
10 rounds done for Joe Cordina and it went as many predicted it would. It should be a fairly comfortable scorecards victory for the Welshman, though his rust was certainly there and Kourbanov had his moments.

facebook twitter whatsapp
Joe Cordina ends a 16-month absence from the ring against Belgium's Faroukh Kourbanov. Can he remain undefeated despite the rust?

facebook twitter whatsapp
After close to nine minutes of tenative and mostly even boxing, Fowler makes the breakthrough with a knockdown on a stiff left late in the third. Fortea answers the count, only for the Brit to drop him again with the very next punch, a powerful right! The round ends with Jorge on the canvas, but the count continues and the Spaniard is unable to answer the count this time.

facebook twitter whatsapp
59-55 in favour of Scotney, who didn't offer much in the way of damaging offense but picked her lands on the French fighter superbly. Fantastic timing and counter-striking.

facebook twitter whatsapp
99-90 x2, 97-92 in favour of Billam-Smith. Really? Anyway, I'd certainly say CBS did enough to win, but I'm guessing the judges scored the last four rounds based entirely on assumptions.

facebook twitter whatsapp
We will go to the scorecards on this one, and after looking like he had Ducar in trouble halfway through, CBS really dipped at the end as his opponent rallied. In fact, I had it five rounds apiece with only the knockdowns putting Billam-Smith two points up. Let's get the official word...

Billam-Smith on top after six

facebook twitter whatsapp
He has scored body-shot knockdowns on Ducar in the fourth and sixth, but no finish thus far at the end of round 6. Billam-Smith has taken a lot more shots than he would have wanted, as well, but a stoppage win could be on the cards before we hit 10.

facebook twitter whatsapp
Ali puts in a solid performance in her second pro fight to take the ref's scorecard 60-55 against Connolly.