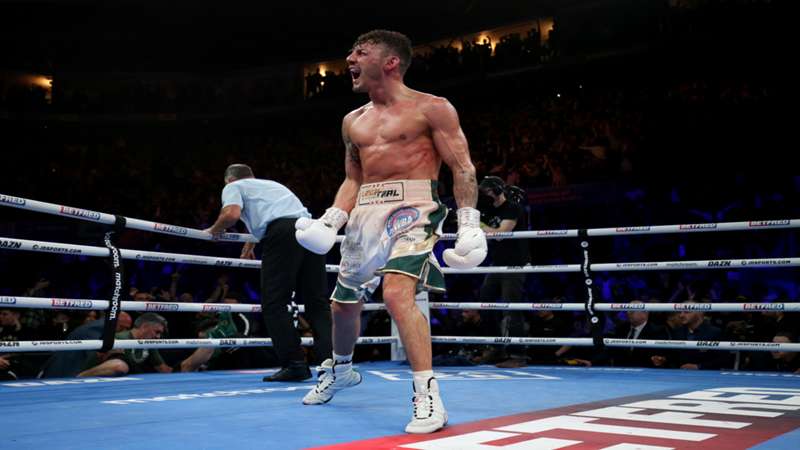 Leigh Wood produced one of the most stunning comebacks ever seen in a boxing ring as he retained his WBA featherweight crown with a gutsy last-round stoppage over Michael Conlan from Motorpoint Arena, Nottingham, England.

After being dropped in the opening session and then hurt throughout the bout, Wood gave himself a fighting chance in the penultimate stanza as he dropped Conlan. It was a moment that would set up an unforgettable finish.

With both fighters going on the attack in the final three minutes, Wood found the shot that he needed as he had Conlan on the ropes. The Irishman fell backwards between the ropes and landed just in front of those sitting ringside. Wood celebrated frantically, but his jovial mood was soon watered down as he demonstrated brilliant sportsmanship to show compassion for his opponent.

Instead of focusing on a great fight, the immediate aftermath of a grueling battle turned to the welfare of Conlan. The outstanding amateur left the ringside area on a stretcher and the post-fight interviews centred on his recovery.

The incident overshadowed a truly remarkable fight that will go down as one of the best ever inside a British ring. Conlan started superbly as he floored Wood with a well-placed left hand at the end of the opening round. His skills were on display throughout as he ran into a healthy lead, but the final two rounds, both belonging to Wood, were the key moments in a contest that had so many.

Looking ahead, Wood can get excited about potential clashes with Josh Warrington, Kiko Martinez and Leo Santa Cruz. But, for now, like everyone else, his first priority will be the full recovery of Conlan. The challenger gave so much in a fantastic see-saw bout, and the entire boxing community are wishing him nothing but best wishes.

Full updates from tonight's show can be found below.

Wood stops Conlan in final round

facebook twitter whatsapp
Incredible drama. What a fight. What a sport. Leigh Wood undoubtedly has produced the finish of the year. He's landed a shot that has put Conlan out of the ring. A stunning finish to a superb fight.

facebook twitter whatsapp
Drama in the 11th. Conlan goes down. He says it's a slip but the referee counts it. What does that mean for teh scorecards? 10-8 Wood.

Wood vs. Conlan: Round Ten

facebook twitter whatsapp
Wood is still in this fight. He knows he's behind, and he's acting on it. He's had Conlan on the ropes several times, and this round, he made it count. Are we set for a huge finish? 10-9 Wood.

Wood vs. Conlan: Round Nine

facebook twitter whatsapp
Conlan has gone back to his boxing. In the ninth stanza, the ferocity of earlier rounds was absent as Conlan got behind his jab and showed glimpses of his amateur pedigree. Wood needs to do something huge in the fight's last quarter. 10-9 Conlan.

Wood vs. Conlan: Round Eight

facebook twitter whatsapp
Incredible from both men. Wood shows huge bravery to stay in this fight, but he's eating too many shots. Conlan landed several significant shots, but Wood's industry throughout the round is enough to take the session. 10-9 Wood.

Wood vs. Conlan: Round Seven

facebook twitter whatsapp
A brilliant round. Big shots from both men and a solid exchange at the end has the crowd on their feet. Conlan just does enough to shade the session. 10-9 Conlan.

Wood vs. Conlan: Round Six

facebook twitter whatsapp
Wood is getting desperate, but he has to take risks. He had enough success in round six to edge it, but he's looking for one-shot rather than trying to box. 10-9 Wood.

Wood vs. Conlan: Round Five

facebook twitter whatsapp
A good round for Conlan. He's attacking the body well, and Wood is feeling it. There were moments when Wood was holding on, but he's still in the fight. 10-9 Conlan.

Wood vs. Conlan: Round Four

facebook twitter whatsapp
Wood's best round. He managed to back Conlan onto the ropes and let his hands go. Not a lot landed, but it's the confidence boost that Wood needs. Can he have more success? 10-9 Wood.

Wood vs. Conlan: Round Three

facebook twitter whatsapp
Wood is having moments but not enough. Conlan is enjoying himself for long periods. His left hand from the southpaw stance has worked well for him all fight. 10-9 Conlan.

Wood vs. Conlan: Round Two

facebook twitter whatsapp
Serious guts from Wood, who is hurt again in the round. He finishes the round strong as he attacks Conlan, but the earlier work from the challenger gives him the round. 10-9 Conlan.

Wood vs. Conlan: Round One

facebook twitter whatsapp
Wood goes down. The Nottingham man was winning the round before walking into an incredible left hand from Conlan. What a start. 10-8 Conlan.

facebook twitter whatsapp
Caoimhin Agyarko was too good for Juan Carlos Rubio as he dominated the Mexican from start to finish. Big things are expected from Agyarko, and he passed his latest test with some ease as Rubio had no answer for Agyarko's frequent attacks. There was a case for Rubio's corner perhaps rescuing him in the later rounds, but after enduring a one-sided beating, Rubio made it to the scorecards, where he was well beaten. Scores were 100-90 x 2 and 98-92.

facebook twitter whatsapp
Terri Harper endured a disastrous result in her last fight when she was halted by Alycia Baumgardner last November. Returning for the first time since that loss, the Yorkshire fighter was desperate to prove that she still has what it takes to compete at the highest level, and she took the first step with a wide points win over Yamila Abellaneda. Harper did suffer a cut early on, but she was always in control as she won 99-91 on all three scorecards.

facebook twitter whatsapp
Anyone who stops Miguel Vazquez is worth keeping an eye on, and Gary Cully easily falls into that category. Although past his best, Vazquez is considered a big test for emerging fighters. He was no match for the unbeaten Irishman who registered a fifth-round stoppage courtesy of a well-timed left hand. Vazquez had been down in the third session as the job looked too much for him, and he was finally put out of his misery two rounds later. Cully is a talent well worth monitoring.

facebook twitter whatsapp
For ten rounds, Sandy Ryan and Erica Farias gave their all in a bruising encounter that saw many meaty exchanges. The Argentine visitor, an experienced campaigner, was on the front foot throughout, and it although Ryan tried to match her industry, she couldn't keep up. Farias was declared the winner via split decision despite losing a point for using her head.