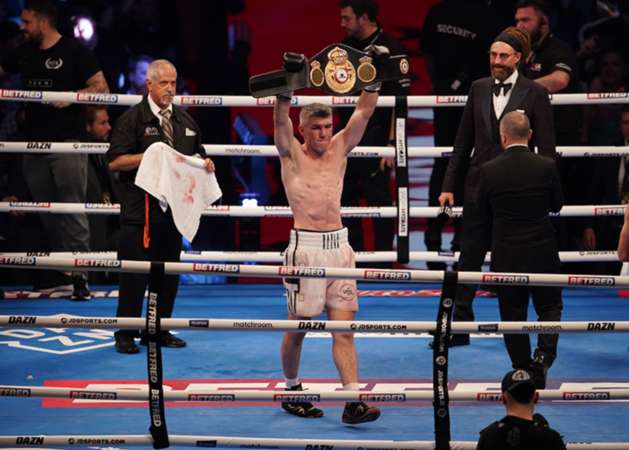 Liam Smith took over in the fight's second half to earn a memorable win over local rival, Anthony Fowler.

Liam Smith once again demonstrated his superiority at the domestic level as he turned up his gears to stop Anthony Fowler in the eighth session. A local derby tag was attached to the fight’s narrative but on paper it looked like Fowler had a mountain to climb and that became evident in the fight’s initial stages after Smith survived an awful cut in the opening seconds.

Conceding the first round, Smith was switched on from the second session as he began forcing the fight and setting a pace that Fowler wasn’t accustomed too. With the fight reasonably close following the first third, Smith turned the fight in his favor with a huge right hand that floored Fowler in round five.

Fowler done well to beat the count and after appearing to be back in the fight after weathering the original storm, his hopes of success were dashed in the eighth round as Smith landed a brilliant left hook to end the contest. Smith made it clear in his post-fight interview that he wants a return to the world scene and on this evidence, it’s obvious he’s more suited to it.

Tim Tszyu and Jessie Vargas are the names that Smith that has been linked to in recent times and both will provide answers on whether the former world champion can compete for such honors again. For now, Smith can be content with being the best locally and domestically, but there’s a lot to like about his chances on reaching the top once more.

Smith stops Fowler in round eight

facebook twitter whatsapp
A brilliant left hook from Smith ends the fight as Fowler is stopped as he beats the count. A gutsy effort from the 2016 Olympian but Smith's extra pedigree is a huge advantage.

Smith vs. Fowler: Round Seven

facebook twitter whatsapp
Smith's cut looks bad but that's the only negative thing you can say about him at this stage. Fowler is performing okay to stay in the fight but he needs more to stop Smith's monentum. 10-9 Smith.

Smith vs. Fowler: Round Six

facebook twitter whatsapp
Another Smith round. Fowler looks recovered from the disaster he endured in the previous session but he needs to do more to win this fight. Smith looks confident and he's walking forward with hurtful intent. 10-9 Smith.

Smith vs. Fowler: Round Five

facebook twitter whatsapp
Smith turns the fight in his favor with a superb shot that floors Fowler. Smith goes on the hunt for the rest of the round but he can't find the attacks to end the fight at this point. 10-8 Smith.

Smith vs. Fowler: Round Four

facebook twitter whatsapp
Both fighters are now cut as Fowler's left eye pours with blood. Smith is more aggressive and that gives him the round. 10-9 Smith.

Smith vs. Fowler: Round Three

facebook twitter whatsapp
The best round of the fight up to now. Smith starts quick but a right hand from Fowler turns the session in his favor. This fight is beginning to liven up. 10-9 Fowler.

Smith vs. Fowler: Round Two

facebook twitter whatsapp
A close round but much improved from Smith. He's using his feet to close the distance and he got through with some decent shots. Fowler will be satisfied with his start but Smith edges round two. 10-9 Smith.

Smith vs. Fowler: Round One

facebook twitter whatsapp
Anthony Fowler needed a good start and he's got exactly that. Using his jab, Fowler found the target on several occasions as Smith forced the pressure. Smith is also cut on the left eye. 10-9 Fowler.

facebook twitter whatsapp
Everyone expected a gruelling battle between Ted Cheeseman and Troy Williamson but no-one could quite grasp what occurred as both fighters delivered a classic. Brutal from the opening bell, both fighters met in the middle of the ring and shared countless exchanges. As the bout swung both ways, Cheeseman appeared to be getting on top but his momentum was dramatically halted as Williamson ended matters with a superb left hook in round ten to become British champion at 154lbs. Huge credit must go to both fighters for playing their part in an unforgettable encounter.

facebook twitter whatsapp
Peter McGrail enjoyed a successful pro debut by schooling Ed Harrison over six rounds. McGrail was in control throughout and his dominance was confirmed at the end of six one-sided sessions when he was awarded every round on the scorecards. Bigger tests lie ahead for the Liverpool man but he can be satisfied with his first outing.

facebook twitter whatsapp
Shannon Courtenay's week got even worse after she lost to Jamie Mitchell. After relinquishing her world title on the scales, Courtenay was well beaten by her American opponent as she failed to match the workrate displayed by the 36 year old. Courtenay was shocked to hear the verdict but it was the right result. The Watford fighter will be desperate to regain her crown and she will likely push for an immediate rematch.

facebook twitter whatsapp
In a superb domestic encounter, Kieron Conway squeezed past James Metcalf to potentially set up a British title fight with the winner of Ted Cheeseman vs. Troy Williamson. Trying to fight from long range, Conway set up enough attacks to stay busy but the nasty approach from Metcalf always kept him in the fight. After ten rounds, Conway was declared the winner by the narrowest of margins.

facebook twitter whatsapp
Luke Willis has long believed he belongs at title class and he went some way to proving that with a smart display against Rylan Charlton. Willis built a healthy lead in the early rounds and despite Charlton coming on strong in the latter stages, Willis always appeared one step ahead. After ten hard rounds for both men, Willis' masterful work was rewarded on the scorecards.

Dacres too good for Sokolowski

facebook twitter whatsapp
Sol Dacres showed plenty of maturity to box his way to a points victory over Kamil Sokolowski. The Birmingham heavyweight is seen as one of British boxing's best prospects and he enhanced those claims with a solid display to win 78-74 against the durable Pole.