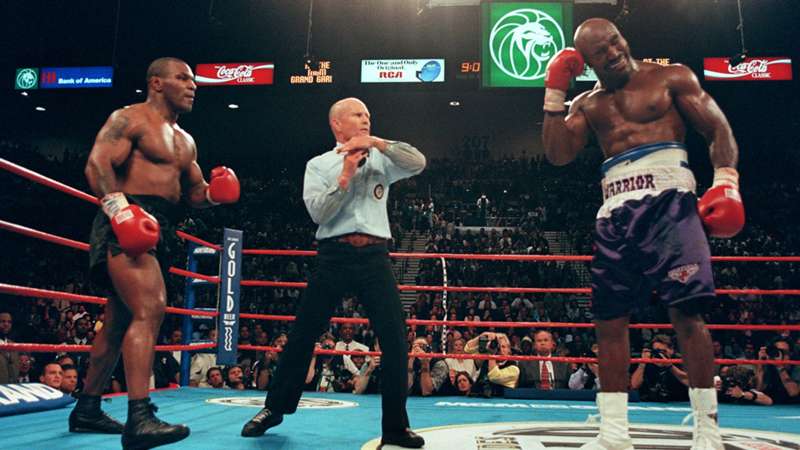 The former heavyweight champions are in talks to put on one of the biggest shows of the year.

Mike Tyson is set for a trilogy fight with Evander Holyfield that could earn a potential $200 million payout, as the pair are in talks to hold their third fight in Dubai, according to The Sun.

Tyson, the 54-year-old former undisputed world heavyweight champion, fought in November in an exhibition fight against Roy Jones Jr. that went to a draw even though the consensus was "Iron Mike" won going away. He has made it clear he would be willing to step back in the ring for another bout. Holyfield hasn't competed since an 11th-round TKO victory over Brian Nielsen in May 2011.

The duo had already fought twice, first in November 1996 when Holyfield stopped Tyson in the 11th round in an huge upset to win the WBA heavyweight title. An infamous rematch happened seven months later in June 1997 when Tyson was disqualified for biting part of Holyfield's ear off.

Tyson (50-6, 44 KOs, two no contests) went on to never regaining any part of the heavyweight crown, losing to Lennox Lewis via eighth-round knockout in June 2002 in his last shot at gold.

After the Tyson rematch, Holyfield (44-10-2, 29 KOs, one no contest) became a unified champion before losing to Lewis in the rematch for the undisputed heavyweight title via unanimous decision in November 1999. "The Real Deal" claimed the belt one more time, beating John Ruiz for the vacant WBA strap in August 2000 before losing it to Ruiz in a subsequent rematch in March 2001.

Given Anthony Joshua's fight with Andy Ruiz Jr in Saudi Arabia in 2019 generated a $100 million site fee and the pay-per-view sales generated by the biggest boxing fights during the COVID-19 lockdown, a massive payday for Tyson and 58-year-old Holyfield seems inevitable.

A money-spinning trilogy match between Tyson and Holyfield would appeal to them and boxing fans.