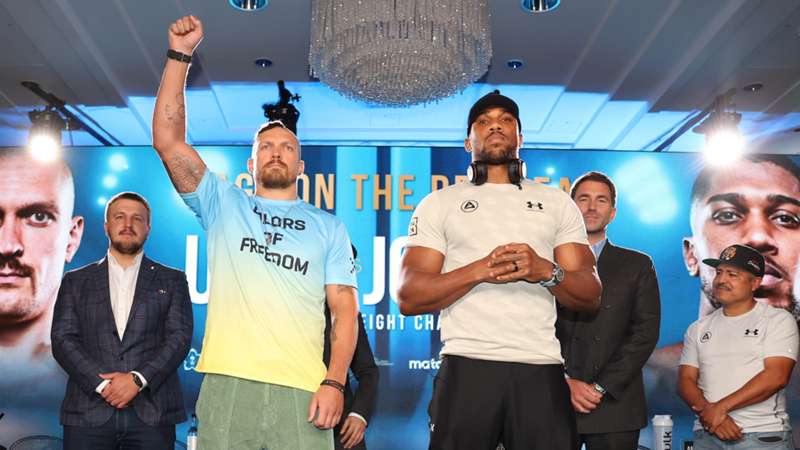 What each boxer must do to be successful in this unified world heavyweight championship rematch Saturday night.

The time for talking is over. The boxing world is about to find out if Anthony Joshua can become a three-time unified world heavyweight champion when he clashes with Oleksandr Usyk in their highly-anticipated rematch inside the Jeddah Superdome in Saudi Arabia on Saturday night, and live on DAZN.

Usyk (19-0, 13 knockouts) didn't have any trouble dismantling Joshua (24-2 with 22 knockouts) in a sound boxing display toward a unanimous decision to become the new champ in England last September. Joshua changed his trainer to Robert Garcia since, hoping that he has sharpened his tools enough for payback.

With the stakes at a fever pitch for their second bout, DAZN lists and analyzes the keys to victory for each fighter.

Anthony Joshua tried boxing with Usyk for a bulk of their first bout and it didn’t fare well for “AJ” at all, as he was forced to fight with urgency late. And when he did it was too late. In this rematch, Joshua has got to get rough and bring the fight to Usyk immediately. That means, throw and land power shots from the opening bell and imposing the clinch if need be to punch Usyk with short, inside blows. It also means burying his shoulder against him (more on this below), pushing off on the smaller fighter and even headlocking Usyk in the clinch. Anything to let Usyk know that it's going to be a long night. Deploying all of these bully tactics early could go long ways in Joshua setting the tone for very different results in this rematch.

Lean on Usyk, sap his energy

Joshua can learn a lot from watching Tyson Fury’s trilogy fights with Deontay Wilder. In all three of their bouts, especially the last two, Fury did an excellent job of being the bigger man by leaning all over Wilder and mashing him against the ropes to make “The Bronze Bomber” feel his weight. To do this, Fury lowered his shoulder into Wilder’s chest for as long as possible before the referee broke it up.

Over time, the strategy worked to sap Wilder of his energy, especially in their second and third fights. Joshua should look to do the same against Usyk. Leaning on Usyk and making him feel his weight complements Joshua getting rough and bringing the fight to the champ immediately as aforementioned. He doesn’t do these things and the Brit might not become the three-time unified world heavyweight champion.

Be ultra aggressive, catch the champ coming in with right

Joshua stands three inches taller than Usyk and weighed nearly 20 pounds more than the Ukrainian in their first fight. Add that to the fact that AJ has a four-inch reach advantage and it means that Usyk will more than likely have to get inside to successfully box the former champ. When Usyk encroaches, Joshua has to catch him coming in with a big right — whether it’s a straight, hook or overhand. Joshua did find success doing this in their first fight, especially blasting an incoming Usyk with a right hook. But he didn’t do it with enough aggression and consistency to have his hand raised. With trainer Robert Garcia, Joshua may have better timing on it and hopefully deliver with way more aggression. In bringing the fight to Usyk immediately, Joshua should also look to deposit shots to the body. They might be the recipe for an incoming Usyk to lower his guard just enough for Joshua to put him away with that massive right hand. Be clear — Joshua needs to revert to being a knockout artist. Ultra aggression will help him get to this point.

In their first clash, Usyk did an shrewd job of flicking his right hand out there as a loose feint only to land a piercing left. He did this repeatedly straight down the middle to split Joshua’s guard or lack thereof. Until Joshua shows him that he has adjusted to this in their rematch, the southpaw should look to continue this strategy. Outboxing the Brit once again will allow Usyk to bank rounds toward his first unified world heavyweight championship defense.

Use AJ’s aggression against him

Joshua’s increased aggression can make it a tough Saturday night for Usyk. Or the unified heavyweight champion of the world can use Joshua’s aggression against him via a perfectly-timed counterpunch. We saw Usyk do just that over sequences in their first fight, especially in the 12th round. There, seconds after Joshua flung a right hook, Usyk countered with a crunching left hook of his own and wobbled the former two-time champ. In that very moment he used Joshua seeking a knockout blow against him and turned the tide enough to threaten a stoppage. More skillfully-timed and placed shots like this would make the rematch hellacious for AJ.

In addition to Usyk’s left straight down the turnpike, Joshua didn’t have any answers for the Ukrainian’s multiple-punch combinations that were unloaded with speed and from slick, bursting angles. As aforementioned, those blistering combinations could have produced a stoppage had there been a few more ticks on the clock late in their first bout. In this second bout, Usyk has to keep unleashing these combos … or at least until AJ shows that he can counter with enough thunder. Usyk landing his left and piecing it together with several punches could spell doom to Joshua in Jeddah.