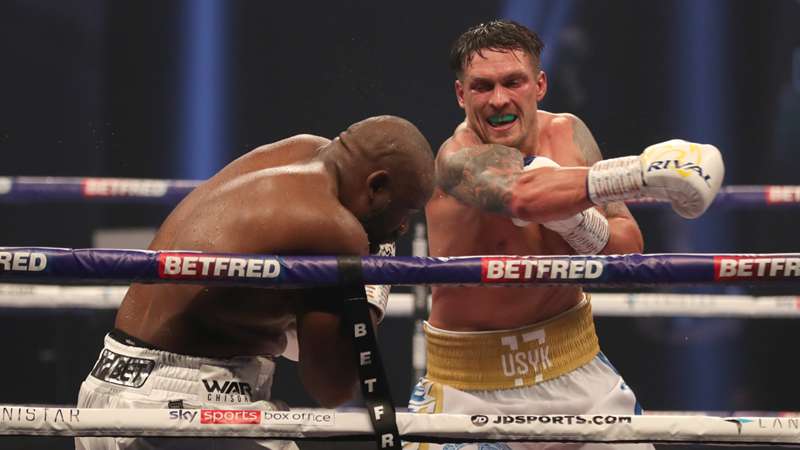 Oleksandr Usyk's technical game was too good for a game Dereck Chisora as he won his second professional bout at heavyweight via unanimous decision at the SSE Arena, Wembley.

Usyk (18-0, 13 KOs), who unified the cruiserweight division before stepping up to heavy, beat Chazz Witherspoon last year in what turned out to be a non-event but had a much better introduction to the maximum weight class versus the tenured Chisora (32-10, 23 KOs), who made life uncomfortable for the Ukrainian early on with an all-out attacking approach.

It wasn't long before Usyk's guile and counterpunching took over, and Chisora had to tone down his approach in order to last the full 12, even adopting a switch-hitting strategy to find the occasional way back in.

“This was a real test at heavyweight," said Usyk after the fight. "Chisora is a big guy, a hard guy. Boxing is beautiful, I love boxing.

“I fought Chisora’s fight. I was expecting a fight like that, maybe even a tougher fight. I’d give myself three out of 10 [for his performance vs. Chisora].

A despondent Chisora said: “I feel great, just disappointed. I thought I won, 100%. I was pushing the pace. I gave a couple of rounds away, but I was pushing him. The judges didn’t see it that way.

“My body shots were good. He was complaining but the referee didn’t see it that way. I’m gutted.”

In chief support, George Kambosos Jr. (19-0, 10 KOs) made good on his promise to defeat Lee Selby (28-3, 9 KOs) on British soil with an impressive performance to win their final eliminator for the IBF lightweight title currently held by Teofimo Lopez Jr.

After four close rounds, the former world featherweight champion looked as though he was finding his pattern with the undefeated Australian, who cut a frustrated figure on his way back to his corner.

However, Kambosos Jr. tweaked the game plan from round six and did not look back. Though it appeared ‘Ferocious’ did not drop a single round of the back seven, the judges ruled the fight a split decision with cards of 118-110, 116-112 and 114-115.

“That’s two former world champions I’ve beaten in their own back yard,” said Kambosos Jr. after the big win. “I told everyone I was too fast, too strong, too powerful, too good.

“I want Lopez Jr., I want the fight. Let’s do it next, world title shot. I’m the mandatory challenger. I’ll train tonight, I promise you, because I want that world title.”

On the undercard, Savannah Marshall (9-0, 7 KOs) finally became a world champion at the professional level after overwhelming Hannah Rankin (9-5, 2 KOs) on her way to a seventh-round stoppage for the WBO middleweight title.

After a quiet opening round, the former Team GB Olympian proceeded to take charge and dominate her Scottish adversary until a stiff body shot scored a knockdown during which the official waved off the contest mid-count.

Marshall reiterated her desire to face undefeated American Claressa Shields after the win, telling Sky Sports: “Claressa won her titles before me because she got her chances before me, not because she’s better than me.”

To date, Marshall is the only fighter to have defeated Shields at any level of boxing, in the second round of the 2012 AIBA Women's World Boxing Championships in Qinhuangdao.

The Northern Irishman was overjoyed with what he called his biggest career win to date, and with the European belt being a stepping stone to world title contention, McCarthy called out the world’s current top cruiserweight, 2020 Muhammad Ali Trophy winner Mairis Briedis.

Ramla Ali’s professional debut went to plan as she proved too much for the fellow rookie, Germany’s Eva Hubmeyer (1-1, 1 KO), ultimately scoring a six-round shut-out on the referee’s scorecard.

And the card got off to an enjoyable start when unbeaten super-bantamweights Carly Skelly (3-0-1) and Amy Timlin (4-0-1) fought a close contest which, ultimately, the judges for the vacant Commonwealth title decider ruled as a split draw.

facebook twitter whatsapp
One final tilt from a knackered Chisora. He's still coming forward, looking for big strikes. He's also walking into a lot of Usyk's shots. It goes the distance, but while I know there'll be fans out there who rated Chisora's industry that was a clinic. Usyk took every round from the second on and wins it by a distance for me. Let's see if the judges saw it the same way...

facebook twitter whatsapp
Chisora has probably salvaged his career with this fight. With some of his unmotivated performances and disheartening defeats, it was easy to envision him fading into obscurity. But even though he surely hasn't done anywhere near enough here, he's shown the hustle, desire and resilience to earn a few more paydays before he's done. He withstands a couple of heavy Usyk combos to land some good shots of his own. One round to go...

facebook twitter whatsapp
Usyk may have hurt his left hand in the ninth. Chisora, his team perhaps noticing, digs deep and finds a second wind with some good work and some decent lands. Usyk continues to paint his gloves all over Dereck's face but if that hand is hurt, he may well just look to cruise through the final two rounds as opposed to looking for a late stoppage.

facebook twitter whatsapp
We're heading to an inevitable conclusion here, unless Usyk or the official ends it sooner. More attempts from Chisora, more picking off from Usyk. The Ukrainian no doubt would need to show more against a world heavyweight champion, but he has been clinical since weathering that first three minutes.

facebook twitter whatsapp
Usyk is having his way with the combinations now. Chisora is looking gun shy, knowing he'll take a lot of offense if he steps forward. Dereck is switch-hitting a lot to find a way in but he's paying the price for every advance, even the ones that land on Usyk. 7-1 Usyk.

facebook twitter whatsapp
Another good round of action, the best since the second. Chisora's getting through to Usyk again, but he's taking a lot of shots in return. Late in the seventh, Usyk gives Chisora a taste of his power for the first time with a strong combination that really fazed the Brit. It's been all Usyk after dropping the first round.

facebook twitter whatsapp
Credit to Chisora, he's tweaked his approach to conserve energy but it's giving him no more success on the lands. Usyk keeps catching him coming in, over and over, and Dereck again resorts to manhandling his opponent which earns him a word from the official. 5-1 in rounds for Usyk.

facebook twitter whatsapp
Many said Chisora had only four rounds to win this or else he'd be picked apart by Usyk. Truth be told, that had already started before round five. This one's a scrappy round, as Chisora makes a brief switch to southpaw himself, just like Usyk who doesn't throw a whole lot of punches even on the back foot.

facebook twitter whatsapp
A solid first minute of the fourth for Chisora, but he's already slowing down by the halfway stage of a round. Usyk, meanwhile, is warming up. Peppering Chisora with jabs and quick combos. Chisora appears to catch Usyk below the belt and then puts the Ukrainian on the canvas illegally, no knockdown. It's 3-1 to Usyk in rounds.

facebook twitter whatsapp
Usyk is making his footwork count now. He's evading more and more shots and forcing a fair few whiffs from Chisora. The Brit is still finding some degree of success with his body shots but he's eating plenty of leather for the privilege. Just as he said he would pre-fight, to be fair.

facebook twitter whatsapp
Cracking round. Usyk is starting to get comfortable in there and landed a lot more on Chisora as he came in, but 'Del Boy' wasn't swinging at air, either. Usyk takes that 10-9 with the better work on his lands. We'll see how long Dereck can keep this pace up.

facebook twitter whatsapp
As promised, Chisora starts this hot and aggressive and he does pretty well with that approach. Usyk spends most of the opening round backing off, trying to get a read of his foe. His only significant counter-strike comes 30 seconds from the end of the round. That's a Chisora round, but one would imagine that Usyk and his team were anticipating a start like this.

facebook twitter whatsapp
We have our fighters, we have our introductions. Opening bell sounds and... Usyk vs. Chisora is underway!

facebook twitter whatsapp
Complete with a Halloween-themed pyro show before the main event ringwalks, we are set for Oleksandr Usyk vs. Dereck Chisora. It is, in their own words, the lion vs. the elephant. Can anyone stop Usyk? Will Chisora give him a rough welcome to the big heavyweight stage?

facebook twitter whatsapp
Selby and Kambosos Jr. went the full 12 rounds, and after a very frustrating fifth round, Kambosos figured it out and didn't look back. On my card, the Australian won every round from six onwards. But it's the three judges who will decide their fate. Here we go...

facebook twitter whatsapp
You know what? At the end of the fifth round, Kambosos looked frustrated as Selby began to get into his groove for a 3-2 lead in rounds on my card. However, Kambosos has really started to put things together from the sixth onwards and is in front by two rounds. That said, it appeared on the coverage that the eighth round only lasted two minutes. Was it an error on the Sky Sports on-screen clock or a genuine timekeeping error?

facebook twitter whatsapp
Four rounds down, Selby vs. Kambosos Jr. is a pretty even fight and every bit the meeting of two different styles the boxers themselves predicted. Kambosos will have wanted to drag Selby into a closer fight by now, but he's making enough contact with the elusive Selby to make this more of a war as we move on.