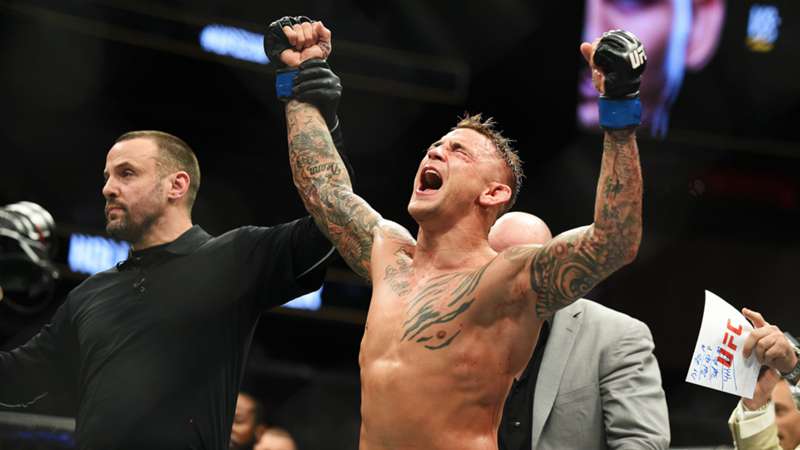 The fight between Dustin Poirier and Dan Hooker lived up to the hype. It was an exceptional display of violence, with Poirier winning via unanimous decision.

Dustin Poirier vs. Dan Hooker was expected to be a Fight of the Year contender, and it overdelivered on those lofty expectations. Poirier won a unanimous decision in an astounding display of violence at the UFC Apex in Las Vegas on Saturday night.

It was an absolute war between two of the top five fighters in an incredibly stacked lightweight division where Khabib Nurmagomedov and Justin Gaethje are on top. It was also the epitome of a mixed martial arts fight as Hooker and Poirier showcased every aspect of the game from beginning to end in their thriller.

Hooker started it early in the first by landing leg kicks and body shots. Poirier managed to stay sharp and land his jab. It didn't take long for defense to go out the window as both fighters remained in the pocket and fired strikes with deadly intent.

And that could be considered a feeling-out round.

The action only heated up in the second round with both fighters now familiar with the other's approach. The back-and-forth action was incredible through the final seconds of the round, when Hooker put together a savage display of punches that appeared to have "The Diamond" in trouble.

But Poirier still had a lot more in the tank for the start of the third round. Although the action slowed down after the frantic opening, the round was still an entertaining battle that saw Poirier begin to gain an edge. A tiring Hooker shot for a takedown and found himself trapped in a tight guillotine, but he showed incredible resolve and escaped the submission attempt. Hooker managed to get into Poirier's guard but found himself eating short punches and elbows from his opponent.

The two combatants entered the final frame totally spent, but Poirier dug deep and crushed Hooker with a big punch just as Hooker sought a takedown. Poirier continued to land ground and pound until the final bell of what was an extraordinary showdown that will certainly be in the conversation for Fight of the Year.

Poirier won with scorecards of 48-47, 48-47 and 48-46 and will now wait to see what is next as Gaethje, Nurmagomedov, Conor McGregor and Tony Ferguson jockey for position.

In the co-main event, Mike Perry made the odd choice of having his girlfriend as his cornerman for his showdown against Mickey Gall, but the decision paid off as Perry controlled much of the fight with his powerful striking and takedown defense to win a unanimous decision.

Gall struggled to get much offense in as Perry stalked and pressured his opponent throughout the fight. Gall was expected to use his grappling, but Perry was the one who took down his opponent with suplexes and then controlled him from the top position.

In the second round, Perry dropped Gall with a hard right hand and fired a brutal elbow from inside Gall's guard right before the end. It was all Perry in the third as he took Gall down and landed some ground and pound. Gall could only scramble to avoid absorbing more punishment.

Perry earned a unanimous decision with no coaches in his corner. That is impressive no matter how many ways you slice it.