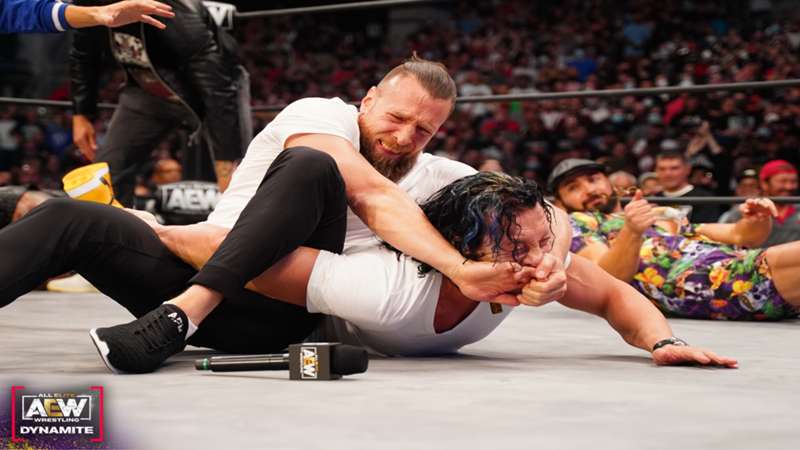 One of the most highly anticipated weeks of 2021 for All Elite Wrestling occurs as they will hold two events called "Grand Slam," which will include editions of Dynamite on Wednesday and Rampage on Friday from Arthur Ashe Stadium, home of the U.S. Open tennis tournament, in Queens, New York.

On Dynamite, the featured match on the show will be AEW Heavyweight champion Kenny Omega taking on former WWE Heavyweight champion Bryan Danielson. After Omega defeated Christian Cage in the main event of All Out at the beginning of September, Danielson made his AEW debut and confronted "The Best Bout Machine."

Then on Rampage, CM Punk wrestles on live national television for the first time since January 2014 when he takes on Powerhouse Hobbs.

During the Sept. 8 edition of Dynamite, "The American Dragon" had a segment with Omega that ended with him putting the champion in his armbar submission. Last week on Dynamite, Danielson challenged Omega to a non-title match — which was accepted.

A DREAM MATCH years in the making! THIS WEDNESDAY on #AEWDynamite: Grand Slam at 8/7c LIVE on @tntdrama from NYC, @KennyOmegamanX vs. @bryandanielson pic.twitter.com/RbEBULpQD9

Punk made a successful return to the ring at All Out when he beat Darby Allin. Three days later on Dynamite, Punk got into a confrontation with Tazz that resulted in a tense staredown with Hobbs. Last week on Dynamite, Punk was doing commentary when Tazz came to distract him and Hobbs attacked him from behind. Hobbs picked up Punk and chokeslammed him on the table.

"You ain't faced nothing like this!" After a brutal attack on #AEWDynamite, a confident @TrueWillieHobbs battles @CMPunk next Friday on a special 2-hour #AEWRampage: Grand Slam on TNT in Punk’s first TV match in more than 7 years! pic.twitter.com/EVXTXRucDr

AEW has been gaining a ton of steam and has only intensified since the signings of Danielson, Punk, Adam Cole, and Ruby Soho.

Here is all you need to know about AEW Grand Slam.

AEW Grand Slam begins with Dynamite at 8 p.m. ET on Wednesday, and Rampage starts at 10 p.m. ET on Friday. Each card is expected to last around two hours.

How to watch AEW Grand Slam?

Each edition of AEW Grand Slam will be live on TNT United States, TSN in Canada, and streamed on FITE.TV everywhere else around the world.

Where is AEW Grand Slam?

Grand Slam takes place from Arthur Ashe Stadium in Queens, New York. It is the first time AEW has come to the venue.