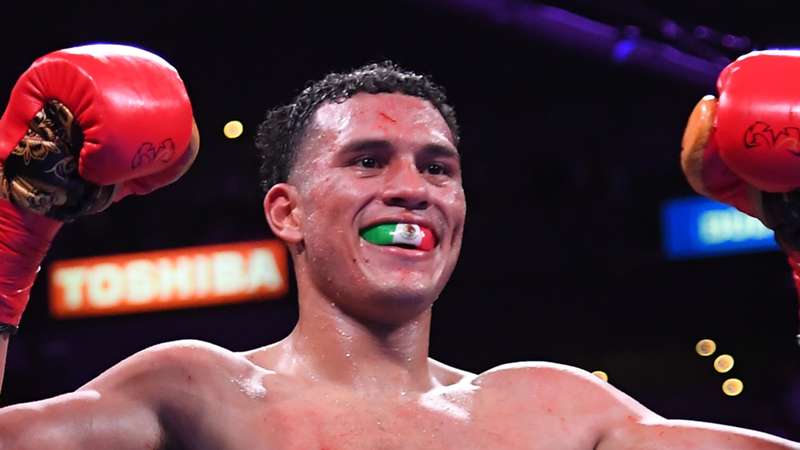 It's hard to disagree with the two-time super-middleweight champion.

Canelo Alvarez is a 10-1 favorite according to BetMGM to beat Caleb Plant on Saturday and become the undisputed super-middleweight champion. The question many pundits wonder is, who will be the guy to knock Canelo off the perch?

The growing sentiment among those in boxing is the 24-year-old checks off every tool in the toolbox. He's young with ferocious power, a strong jab, and a long reach to give Canelo a ton of fits. But can the former two-time WBC super-middleweight champion use all of those attributes and be the most substantial threat to boxing's pound-for-pound king?

"I definitely feel I’m the biggest threat because in order for a fighter to give a good fight to Canelo, he has to have the punching power to keep Canelo off of them and respect him," Benavidez explains to DAZN News.

"None of these guys he’s fought (like) Billy Joe Saunders, Avni Yildirim, Callum Smith, now Caleb Plant, don't really have punching power like that. Me, I do a lot of the same stuff Canelo does in using a good jab, good body shots, good combinations. I'm young, and I'm hungry. Man. I feel like the younger fighters are always the hungriest because they have more to prove. For the other fighters, if you look at (Sergey) Kovalev and Billy Joe Saunders, those dudes are closer towards the end of their career. So if they take a loss, it's not a big deal for them. They're getting a big paycheck, and they say, ‘You know what, we don't have to keep fighting.

"But for me, I feel like this is really the start of my career. This is exactly what I wanted to be at. I've done the groundwork already. Now, the hard work is really here. I'm looking to be one of the best fighters of my generation, and it starts now. You look at Terence Crawford, and you look at a lot of great fighters; they don't really start getting to the peak of their career until they're like 26, 27. I’ll be 25 next month, and I've been a two-time world champion so far. My career is barely starting, so I still have a lot to prove. That's what makes me so dangerous. I'm hungry, and I want this. I'm a big puncher. I have 24 fights, 21 knockouts. I have a lot of speed. I have a great jab. I have great body shots. I'm a very dangerous fighter. I am the one that's going to be the one that beats Canelo one day."

If an Alvarez-Benavidez clash does materialize, what weight class would it be contested at? Currently, Alvarez competes at 168 pounds but did knock out Kovalev at 175 in November 2019. Benavidez has fought his entire career in the super-middleweight division. To Benavidez, the division really doesn't matter as he can make the weight either way.

However, talk of any potential fight can be thrown to the wayside if Plant upsets Canelo or Davis takes of Benavidez. Perhaps both can happen as anything can happen in boxing. With Alvarez returning this weekend and Benavidez having his turn next weekend, they seem to be on a collision course to meet sometime in 2022.

"I think so," Benavidez feels about a 2022 battle. "I think everything is happening at perfect timing. I think the timing is the best. I've got more experience. I'm getting older. I'm getting my man strength. So I think 2022 is the year that's going to happen because you look at it (and) there’s really nobody left standing for Canelo unless he goes up to 175. But there's still a lot of good fights right here at 168. So I really think it could be made next year."