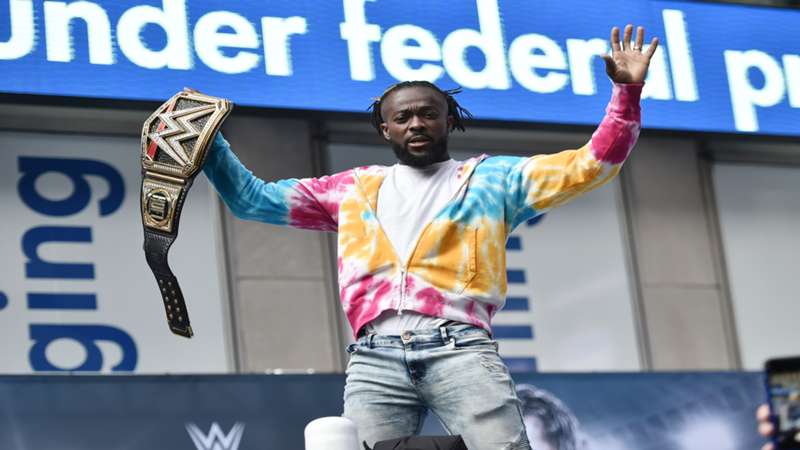 The former WWE champion could be on the verge of making history once again.

Kofi Kingston achieved a lifelong dream at WrestleMania 35 when he pinned Daniel Bryan to become the African-born wrestler to become WWE champion. Kingston held the title for six months before losing the belt to Brock Lesnar, much to the dismay of many in the WWE Universe.

Since then, Kingston has had runs as SmackDown and Raw Tag Team champions with fellow New Day members Big E and Xavier Woods. There were questions on whether the 39-year-old would ever return to the heavyweight title picture.

That came to fruition on last week's edition of Raw when he pinned former multi-time world champion, Randy Orton. At the end of the show, Kingston answered the open challenge of Bobby Lashley. In a mild upset, Kingston pinned the current WWE champion.

What is next for Kingston?

Ahead of Monday's Raw, Kingston talks with DAZN News about the possibility of him and Lashley meeting in a monumental match that would feature two African-Americans men battling for the WWE title, the controversial loss to Lesnar and WWE bringing back live events.

DAZN: Who would be the mom and dad of WWE?

Kofi Kingston: I got a lot of moms and dads. I've been passed around. I've been so blessed. Tommy Dreamer is a guy before I got signed, he came to the school I was training at when he was the head of talent relations. He had a match there, and he saw me work there. Then when I came to WWE, he was there too and always has been one to lift me up and push me in the right direction with advice. Mark Henry is another one who has always been there. He’s someone who's often offered a ton of advice. CM Punk, who took me under his wing (and) to this day, I still don't know why. But he did. In that era, a lot of people were worried about the younger guys coming up and taking their spots and all this. For whatever reason, he took me under his wing, and I learned so much from him and really became brothers with the guy, so I'm grateful for him.

DAZN: You've had a great week, and it's good to see you back in the title with a couple of big wins this past week over Randy Orton and WWE champion Bobby Lashley. A lot of people were upset when you lost the belt to Brock (Lesnar). Did you feel like you were ever going to get a chance to be back in the upper echelon and get back into that main event spot to be once again going for the title?

KK: There’s always a chance. You show up to work one day, and they tell you what you're doing, and that's what happened to me when Ali got hurt in 2019. They told me I’m going to be in the Elimination Chamber, and we're going to have you do a gauntlet match, and you're probably going to be in there for an hour plus. Can you do it? I got thrown in that scene. Then we all know what happened after that in 2019 with the KofiMania craze. It's not cool when I say it. I hate when it comes out of my mouth of me saying KofiMania. It’s nails on a chalkboard to me.

You just never know what's going to happen. For example, on Raw this past Monday, me having a match with Randy Orton (and) having a really good match there. Then who would have thought that I would be the one to answer the open challenge. Nobody on my timeline said that I was going to be the one to come out. People were surprised. You just never know. So there's always a chance that you're going to be thrust into the main event scene. The key is just to be ready at all times. When you come to work, be ready to knock it out of the park with whatever opportunity that you're given. You just always show up to work with the mentality that I'm going to kick ass today. You just never know what's going to happen in our world.

DAZN: How demoralizing was that loss to Brock for you, and how did you stay so positive that you could get things back on track pretty quickly?

KK: I told a lot of people that if it was up to me, I would have had that match be different in the way that it went down. But the thing is, that it's not up to me. I think what we need to realize is that you control what you can control. That's it. I don't get mad over what I can't control. I show up to work, and it's like, ‘What we're doing? Ok, maybe we can do it like this, but we're going to do it like this’. Then once you have the outline of what's going to happen, that's the way that you proceed.

I wish it would have gone down differently. I appreciate that a lot of people were so angry with the way that it went down. I'm always just trying to work towards what's next. For me to come into work and be disgruntled about the way that things were handled, I'm the only one that's going to be affected by that. But what I can control is going out and starting afresh, getting back on the horse and riding, and keeping that positive attitude. I would say that I was disappointed with the way that it went down. But again, I wasn't so mad that I was going to come into work and just pout. I'm not going to come pout and be mad. That's not my style. I've never been like that. It's always been just a matter of just pushing forward no matter what. So that's what I did. You just keep on marching until the wheels fall off.

DAZN: I was thinking about after what happened on Monday at the end of the show. The fact is it seems like it's going to be you and Bobby for the title sometime soon. The fact that you've been the champion and now you'd have two African-American men competing for the WWE Championship. To my knowledge, that hasn't happened in WWE. We saw the women at WrestleMania with Sasha Banks and Bianca Belair. What would that mean to you to face Bobby Lashley for the WWE Championship and have two African-Americans in that match?

KK: It would mean the world because I say this all the time, to be somebody who motivates people to be the best version of themselves is a very empowering thing. At the end of the day, that is what I want to be above all else, above being a wrestler or a superstar or a champion, but being somebody who motivates somebody to go out and be the best version of themselves possible to believe in themselves to go out there and achieve their dreams. We always talk about seeing is believing. For a lot of African-American kids out there, it's so important. Even adults, honestly, to see someone who looks like yourself doing incredible things. There's a lot of people who are able to do incredible things without that vision. But at the same time, it's so much more powerful when you say anything is possible because I see it happening right now. Kofi did it. I can do it. Bobby did it, so I can do it. So we can do it. It's a very powerful thing. It would mean the world. It’d be a historical feat in the industry because, like you said, I don't think that ever happened either if I'm not mistaken.

With Sasha, and Bianca at WrestleMania, being in the main event was so powerful. The way they killed it was, I know that a lot of people are going to remember that match for a long time. It's going to inspire people to do amazing things in this industry, outside of this industry. That is what it's all about. So if Bobby and I were able to go head to head for the WWE title, the thought of winning the championship for a second time would be amazing. But even more amazing than that is the lives that we would touch and the lightbulbs that would go off and just the seeds that we would plant in terms of motivating people on so many different levels. There hasn't been any talk of this. We're all just kind of assuming what would happen. But based on what happened last week, a win over the WWE Champion is a win over the WWE Champion. Not to mention that nobody has pinned Bobby Lashley since he's become WWE Champion, except this guy. I'm going to go ahead and celebrate that.

DAZN: I wanted to get your thoughts on live events coming back with a 25-City Tour starting July 16 on SmackDown. How's it going to feel walking out there and start tossing pancakes once again?

WWE Live Events are back! A 25-city tour, including #WWERaw, #SmackDown and #MITB kicks off on July 16. https://t.co/52qKC9iRcV pic.twitter.com/4EAriULXqC

KK: I cannot wait. I really can't. We always knew how important the crowd was to what we do, especially The New Day. All we do is mess around with the crowd sometimes more than we focus on the match. But to have it taken away from us because of the year that we've had with coronavirus and all that last year and then to have it taken away from us for a year. Now you actually really know the Thunderdome is cool. It's awesome. People get to see themselves on TV. But for us coming out there, the energetic vibe of actual human beings in the crowd is obviously void. So now that we're going to have that back, it's going to be amazing, and we got that little taste of it at WrestleMania. The show started with all of us being out on stage. I remember walking through the curtain, and we walked out into the holding area, and I remember hearing the people just like starting to salivate that we were going to be there. I remember trying to push people out of the way and get out there. I hadn't experienced that in so long. It was a feeling unlike anything else. So I'm excited to have actual fans in the crowd. I know that a lot of people are excited. We have wanted this for so long. Now that things are kind of normalizing and getting to a state where we can all go out and be around each other, I think that this is it's going to be an amazing level of energy.