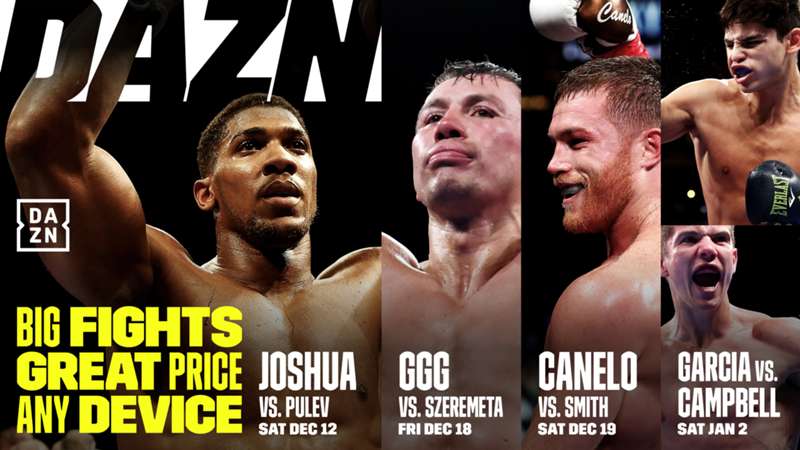 DAZN, the leading global sports destination, is now available across the globe.

The moment you have been waiting for has finally arrived.

DAZN, a live and on-demand sports streaming service, launched today (Dec. 1) in over 200 countries and territories.

Sports fans across the globe can now sign up for DAZN and enjoy a host of elite sporting content, including a number of huge boxing cards between now and Christmas.

For an initial monthly fee of just £1.99 or less, you will have access to a large archive of sports, original content with new editions going live every week. (Pricing in existing DAZN markets remains the same.)

And when it comes to the live action you'll have access to, there really is no better time to join DAZN than right now.

Just eight nights later, WBA, WBO and IBF heavyweight champion Anthony Joshua returns to the ring a year after regaining his belts from Andy Ruiz Jr. when he defends against mandatory challenger Kubrat Pulev in a main event that could have huge implications on Joshua's planned 2021 superfight with WBC champ Tyson Fury.

Joshua vs. Pulev on Dec. 12 is followed by a bumper weekend of boxing just before Christmas, as the great Gennadiy "GGG" Golovkin puts the IBF middleweight strap on the line looking for a record 21st defence of a world title at 160 lb against Poland's undefeated challenger Kamil Szeremeta on Friday Dec. 18, 24 hours before Canelo Alvarez vs. Callum Smith.

Canelo challenges Smith for the WBA and The Ring super-middleweight titles at the Alamodome in San Antonio to complete a two-nighter of big time action featuring perennial rivals Alvarez and Golovkin, who clashed twice in the past.

And when the new year arrives, the big fights continue on DAZN.

The second day of 2021 brings exciting and undefeated Ryan Garcia into collision course with London 2012 Olympian Luke Campbell with the interim WBC lightweight championship going the way of the winner.

Their Jan. 2 clash was set for December until COVID-19 forced a postponement, but it will now start the new year with a bang on the streaming service.

DAZN's archive already contains a wealth of classic fights, athlete features and a slate of original programming including "40 Days," "Saturday Fight Live" and "One Night." Even more content will be added to the on-demand service from 2021.

You can download the DAZN app now on internet-connected devices, including smartphones, tablets, laptops, PCs, and living room devices such as smart TVs, streaming sticks and game consoles.