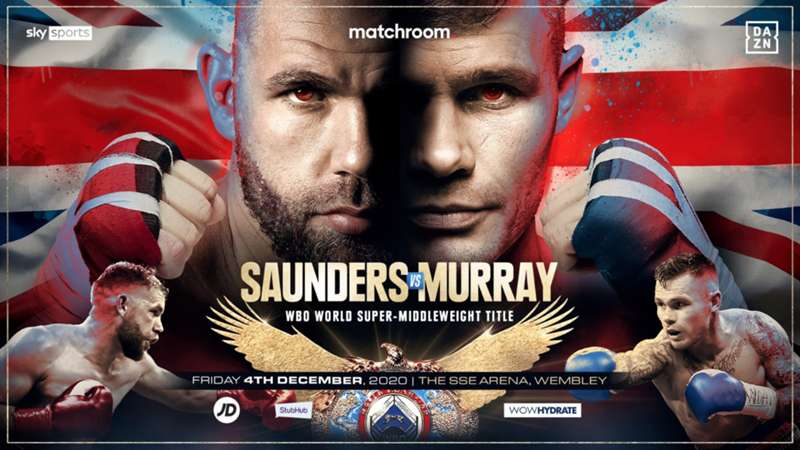 The WBO super-middleweight title is on the line as Matchroom Boxing's residency at the SSE Arena, Wembley continues.

British boxers Billy Joe Saunders and Martin Murray return to the ring after over a year out apiece as world championship boxing headlines one of Matchroom Boxing's final cards of 2020.

Saunders will make his second defence of his WBO super-middleweight title after outpointing Shefat Isufi in May 2019. He successfully defended the belt six months later with an 11th-round knockout of Marcelo Esteban Coceres. Saunders was hoping to fight Canelo Alvarez in May, but because of the COVID-19 pandemic he hasn't been in action since November 2019.

Murray, meanwhile, has tried and failed to become a world champion on four separate occasions at super-middle as well as middleweight. At the age of 38, this could be his final chance to add the sought-after accolade to his resume.

This is a bout that has been attempted in the past, but will now finally take place as part of Matchroom's residency at the SSE Arena, Wembley.

"I am very happy to be defending my WBO title again," Saunders told Sky Sports. "I haven't boxed for a year and I really do miss being in the ring. I can't wait to have my 30th professional fight and finish the year with a bang before a big 2021.

"The coronavirus pandemic has affected everybody in many ways, and it has had a big impact on the sport of boxing. The Canelo fight falling through was very frustrating for me but now the journey continues in December.

"Martin and I were supposed to fight twice before but it didn't happen either time. He said some stuff and so did I, so let's see who can back it up. I'm enjoying training with Mark Tibbs. He's incredibly knowledgeable in the sport of boxing and we are working on new stuff that we will show on the night."

The Saunders vs. Murray card begins live coverage at 7 p.m. GMT/2 p.m. ET. Main event ring walks are anticipated for around 10 p.m. GMT/5 p.m. ET, depending on how long the undercard runs.

Viewers in the U.K. can watch the event on Sky Sports Arena or via the Sky Go app, with a Sky Sports TV subscription. The card is available elsewhere globally via DAZN (not including Australia, New Zealand, Ireland and the U.K.) on a variety of devices with a DAZN subscription.

Click here to find our more about DAZN in your region.

Where is the Saunders vs. Murray fight?

The card will be held in London at the SSE Arena, Wembley. The building is just a stone's throw away from the iconic Wembley Stadium, and will operate inside a "bubble", fully compliant with the latest COVID-19 safety guidelines.