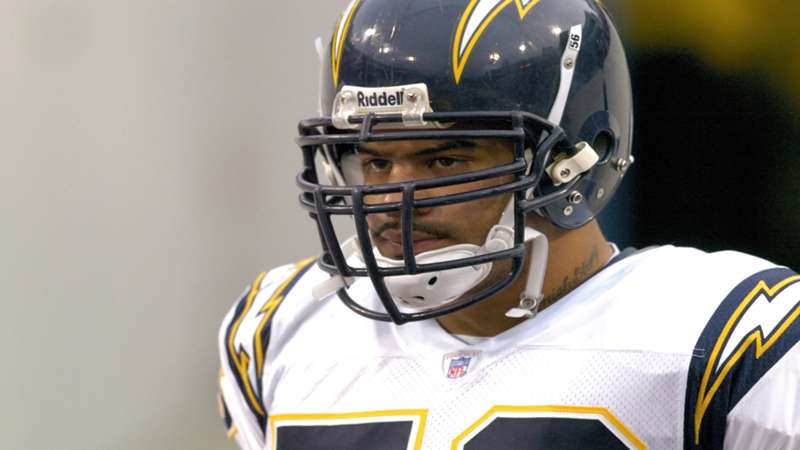 Will the former All-Pro linebacker step into the cage?

Shawne Merriman is a three-time Pro Bowler and a two-time All-Pro as an outside linebacker for the San Diego Chargers.

After retiring at the end of 2012, Merriman went and did a variety of projects. In 2019, Merriman decided to launch his own mixed martial arts promotion, Lights Out Xtreme Fighting (LXF).

The organization was set to have their fifth event on April 24, 2020, but the event had to be cancelled once the coronavirus spread around the world. After the recent reopening of California, Merriman and company strategically decided to safely bring back big-time cage combat.

Merriman decided the time is now as LXF 5 takes place on Saturday from the Commerce Casino in Los Angeles.

Lights Out XF is proud to announce that #LXF5 will be available to watch exclusively on @fubosports on August 7th at 6:30pm PST/ 9:30pm EST.

In anticipation of the event, Merriman spoke with DAZN News about the event, whether he'd ever put on the gloves to fight, and his thoughts on the controversy between Aaron Rodgers and the Green Bay Packers.

(Editor's note: This article was edited for length and clarity.)

DAZN: Before we talk about MMA, I want to ask you about Aaron Rodgers because that's really been the big talk in the NFL. What do you make of that entire situation as it seems like he and the Packers cannot get on the same page because it looks like a horrible marriage that's about to be broken up very soon?

Shawne Merriman: It is, and it should be because listen, the players know that they got a role, and the players know they don't sit up in the front office. You don't control your destiny. You're going to be cut, waived, traded. It happens to the best of the best, right? Aaron Rodgers won't be the first one that had a problem with the organization before. I think that where they (Packers) messed up is they go out and draft a quarterback in his position when he has some good years left in him, and then you can go out and try to help him win a championship now by bringing in another tight end, bringing in another offensive lineman, defensive lineman or cornerback; somebody that's going to help you guys win a championship now. What they told Aaron Rodgers is, 'We're ready to move on from you at any point in time.' So you draft a guy in the first round. First-round guys, they’re supposed to play. They’re supposed to get on the field. So they hedge their bets. They were wrong, and now they’re eating crow. Aaron Rodgers basically said in a press conference that he named all the guys they shoot out the door. He also said he knows he didn't make any decisions, but (said), ‘Hey, let me be part of the conversation. I gotta throw to these guys. These guys got to block for me.' So that's all he said. I don't think anything he said is wrong. I think that he was a perfect person to say it because he has the leverage to do so.

DAZN: Why doesn't the NFL have guaranteed contracts like there is (in) Major League Baseball and the NBA?

SM: It's getting there. People got to understand the NFL, the NBA, and Baseball PAs; they're ahead of the NFLPA by like 15, 20 years or something. Your starting to see these massive contracts. Look at Patrick Mahomes, Dak Prescott, for God's sake. It is starting to get there. But you know, we're still behind the curve. The money is starting to get bigger, bigger guarantees. It needs to get better. It's such a violent sport. When you put stock into somebody, and this is coming from not the former player, but now the business owner, and see and just so I can talk about how people see it. You put stock into somebody that could potentially (have) a high risk of injury. Basketball, baseball get the big guaranteed contracts because there's not much injury. Now a guy may suck and not play well, so you trade them away or find a way to move them, but for the most part, there's the longevity, it's going to be there out of a guy.

DAZN: You could have different things when you retired. Why did you decide to get into mixed martial arts?

SM: To be honest, it's been a passion of mine for a long time. I got in it back in between 2005 and 2006. Jay Glazer introduced me to Randy Couture. His whole thing was because I'm an outside linebacker and a pass rusher dude, he wanted me to get better with my hands. I grew up around a lot of boxers. I had a couple of professional boxers in my family. So coming from that (Washington) DC, Maryland, Virginia area, there's boxers. I grew up in a boxing family and a boxing neighborhood, a boxing area. I'm right up the street from “Sugar Ray” Leonard’s gym and all these different gyms that surround me boxing-wise. But MMA became big in the mid-2000s. So every offseason, I’d train a little bit, start grappling, start rolling, having some light sparring, and then went into full-blown exhibition matches and stuff.

I've been around for a long time, and then fast forward to Lights Out Extreme Fighting. It’s one of those things that just it was supposed to happen. Now we get a chance to be shown all over the nation, Canada and Spain, which is pretty cool for us. We’re growing like hell. People always say, ‘You're gonna challenge the UFC and Bellator.’ I’m like, ‘Why? Just do what you're good at doing, you're great at doing, perfect what you're great at doing, and then do your thing on your own.’ Obviously, UFC and Bellator are great leagues. We're not worried about what they do. We have an opportunity to transition a lot of former athletes from other sports because that's what I've been concentrated on (is) transitioning a lot of guys who retire that still got something left, whether it's NFL, NHL, rugby guys. I've been making a push for that for the last few years. We have a couple of big signings coming up here in the next 30 to 60 days, former athletes.

DAZN: You thought about fighting as you got an MMA company as you have the name value that I think we would put more eyes on the product? Is that something you've been thinking about more in the last couple of years?

SM: Yeah, no question. No question about it. Even sometimes now when I go, and I spar with guys that are in Bellator, in UFC or whatever, after we get done if they haven't seen me train before, the first thing they ask me is, ‘When are you gonna fight?’ For me, I respect this for too damn much to go and try something out. I'm all in, or I'm not doing it all. For me, it's great to go and spar on a Friday or a Wednesday or something like that and get some work with guys because it keeps me going. But it's not one of these things you got to try out. You can play football. You can play basketball. You ain't playing fighting. So when you do that, I realized that these guys and women are training their ass off sometimes twice, three times a day, six, seven days a week. You better be ready because it's a different kind of mentality when you step in there with someone who does this shit for a living. I say it all the time.

I said, ‘Look, you're going in there, you're playing around with people who do this to feed their families. The mentality is different. I love going in, and I'll get after it. I'm going to go three or three five-minute rounds of sparring in. Some days get a little crazier than others depending on who you who you're training with. But for the most part, I feel better when I do that. My body feels good. I feel active. I feel healthy and alive. But to actually do it big, the only place I would fight is Light Out. If there was a big enough guy that people want to see, whoever it is, and it made sense, and I know that people would buy pay-per-views and tune into it, I'll start training tomorrow in Lights Out. Until then, I enjoy promoting all these men and women that fight for Lights Out Extreme Fighting.

DAZN: What are the goals for the promotion?

SM: Well, I think being on Fubo Sports was the first goal that I wanted to make happen when people can see us all over the country and internationally. We are expanding on other markets. But more importantly, I want to open the doors to former athletes first and foremost from NHL, rugby, obviously NFL. We got a former track star that we're talking to right now that was a beast and now has started boxing, but in the last year has been doing more ji-jitsu and things like that. I want to help those transitions of athletes take it to the next level and become a success story where you don't hear about people going broke or CTE or not doing much when they retire, and they can still have a second act in life. Also, with the fighters that we have, I would love to keep our roster. We got some really talented people, who we would like to keep long-term and build around them, so it's not really necessarily a Shawne Merriman League, but it's more of we got some powerhouses. I want to really get behind these guys and promote the hell out of them. We want to be mentioned up there with the tops. I understand what UFC and Bellator are doing. We're not trying to compete with them. But we want to be mentioned in the same light of being an elite league.