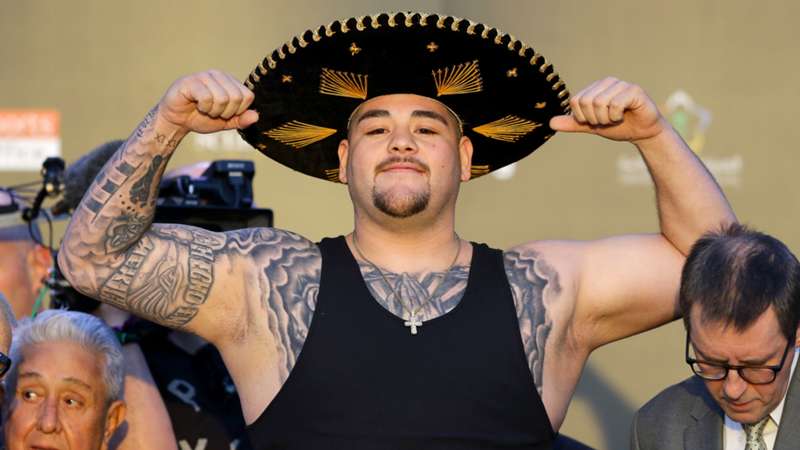 There's a method to Andy Ruiz Jr.'s madness, and the unified heavyweight champion discusses the reason why he weighed in 15 pounds heavier for his rematch with Anthony Joshua.

DIRIYAH, Saudi Arabia — Immediately after Andy Ruiz Jr. stepped off the scale at Friday’s weigh-in, social media lit up with questions surrounding why Ruiz would come into the fight weighing 15 pounds heavier than when he first fought Anthony Joshua back in June.

In their first meeting, Ruiz weighed in at 268 pounds and would go on to pull off one of the biggest upsets in recent memory when he scored a seventh-round TKO to become unified heavyweight champion.

Heading into the rematch, photos that showed what appeared to be a slimmed-down Ruiz began to circulate, and it was expected that he would come in lighter for his Dec. 7 return bout. However, he tipped the scales at 283 pounds.

Shortly after the weigh-in, Ruiz Jr. spoke with DAZN News to discuss why there was such a big discrepancy in weight.

“I was already the same weight as the last fight this morning,” Ruiz explained. “I had to wait until almost 5 p.m. to get on the scale, so I already had my breakfast, lunch and dinner. I also weighed in with my sombrero and pants on, so that’s why I came in so heavy.

“It was a psychological thing as well.”

Ruiz suggested that he wanted to keep the Joshua camp guessing when it came to his weight and feels that he was successful in doing so with Friday’s weigh-in. He also promised that the attributes that were there in the first fight would be present for the rematch. As for Joshua coming in 10 pounds lighter than he did in the first fight at 237 pounds, Ruiz is unsure what it will mean on fight night.

“It could be good or not,” he said. “We don’t know if he’s still going to have that same pop in his punches. It could be a disadvantage, which is why I decided to come in a little heavier in this fight. I can move him around, be a little bit stronger and have more pop in my punches.”

Ruiz did notice a difference in the eyes of Joshua from the first time they stared each other down ahead of their June 1 fight compared to now.

“He definitely has more focus, and he’s not talking as much,” Ruiz said. “I don’t know what he really feels inside. He might say to himself that he’s ready for this, but everybody has a plan until they get hit. But all fighters have to show that they are confident, so we’ll see what it all means on fight night.”

Admittedly, Ruiz is far more carefree than most boxers. Always smiling and often looking as if he’s just happy to be there has always been part of his persona. However, one thing that he wouldn’t joke about is the idea that he’d allow Joshua to hold his world titles like Joshua did for him ahead of the first fight.

“F— no!” Ruiz exclaimed. “I was actually the one who asked him if I could see his belts the first time, and he let me hold them. We were both respecting each other, but it was always just fun psychological stuff for me, you know?”

It’s clear that Ruiz enjoys the mind games heading into the rematch. But whether fans question his lighthearted personality or how much he weighs doesn’t matter to him. The only thing that matters is that he returns to the United States and Mexico carrying the very world titles he brought to Saudi Arabia with him to defend.

“It means a lot for me to bring those titles back home,” he said. “Still, to this day, I have so many doubters who refuse to give me the credit I deserve for beating Anthony Joshua. They have said he wasn’t ready, or he had a mental breakdown. That won’t happen this time around. All of the pressure is on him now, and I’m going to die trying to get that victory.”