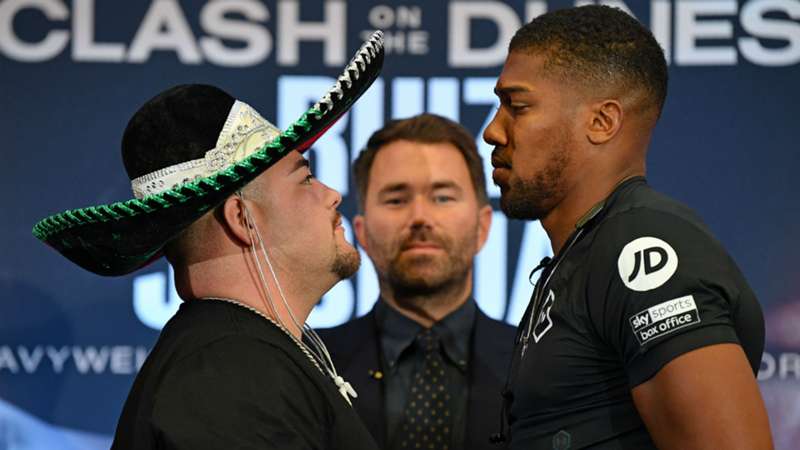 Will the second installment of Ruiz vs. Joshua be as dramatic as their first clash? We'll find out Dec. 7 when the two meet in Saudi Arabia.

UPDATE: Click here for results and highlights of Ruiz-Joshua 2

Andy Ruiz Jr. didn't look anything like a major underdog when he dropped Anthony Joshua four times to win by seventh-round TKO and become the new unified world heavyweight champion back in June.

More than six months later, Ruiz will defend the IBF, WBA and WBO titles against Joshua, looking to prove that his victory wasn't even remotely close to a fluke. Meanwhile, Joshua will be aiming to snatch back his crown and resurrect himself as arguably the top heavyweight in the sweet science. The highly anticipated title unification rematch takes place Saturday, Dec. 7 at Diriyah Arena in Diriyah, Saudi Arabia, and live on DAZN.

Fitness has been an early headline entering this bout. Both Ruiz and Joshua had indicated they'd be slimmed down entering the fight. Ruiz even told DAZN that he'd be aiming to hit the ring Dec. 7 with a targeted weight of 255 to 257 pounds.

However, when it came time to weigh in on Friday, Ruiz was actually 15 pounds heavier than he was for the first fight, hitting the scales at 283 pounds. Joshua, however, was 10 pounds lighter than in June, weighing in at 237 pounds.

Will Ruiz defend the titles and show that he has his British rival's number, or will Joshua produce a career-defining performance and become a two-time world unified heavyweight champ?

Here’s a complete guide to the Ruiz vs. Joshua 2 fight, with betting odds, undercard information and more.

When is Andy Ruiz Jr. vs. Anthony Joshua 2?

This will mark both Ruiz's and Joshua's first fight since June 1, when the former shocked the world with his seventh-round TKO of AJ. Ruiz and Joshua are scheduled to take their ring walks about 3:45 p.m. ET — although the time depends on the length of the earlier fights — which is 8:45 p.m. in England and 11:45 p.m. local in Saudi Arabia. The bell for the first round should ring about 4 p.m. ET.

DAZN will also re-air the Ruiz-Joshua fight at 10 p.m. ET.

Ruiz vs. Joshua 2 live stream: How to watch

The Ruiz vs. Joshua 2 fight isn't available via traditional pay-per-view or a linear TV channel. Fans in North America can instead sign up to watch the fight online with DAZN, the global sports live-streaming service.

How much does the Ruiz vs. Joshua 2 fight cost?

New subscribers to DAZN can sign up for a monthly subscription or annual pass to watch the most highly anticipated rematch of the year. The annual pass — which includes access to all of DAZN’s live events, as well as highlights, behind-the-scenes features and original shows — is $99.99 in the U.S. That averages out to a little over $8 a month. Those who prefer a monthly plan can sign up for a monthly option for $19.99. (In Canada, the monthly plan is $20 CAD, and the annual plan is $150 CAD.)

A subscription also includes access to archived Joshua fights, including the original clash with Ruiz, his fight against Alexander Povetkin in 2018, the April 2017 thriller against Wladimir Klitschko and more.

Where is the Ruiz vs. Joshua 2 fight?

The Ruiz vs. Joshua rematch will take place at Diriyah Arena in Diriyah, Saudi Arabia, in a bout dubbed the "Clash on the Dunes." Their June 1 clash was held at Madison Square Garden in New York City.

This marks the first time fighting in Saudi Arabia for both boxers. Although there have been other boxing events in Saudi Arabia, Ruiz-Joshua 2 is by far the biggest match to take place there.