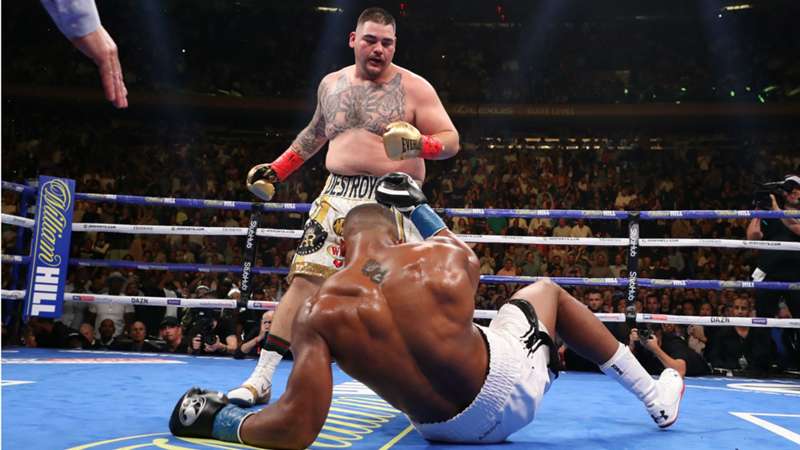 Andy Ruiz Jr. pulled off an upset for the ages, stopping Anthony Joshua in the seventh round on Saturday night. Here's how it happened.

No one gave Andy Ruiz Jr. a chance to defeat Anthony Joshua and become the unified heavyweight champion of the world.

Ruiz, who was a 9-1 underdog, responded by pulling off one of the greatest upsets in boxing history. He scored four knockdowns, including two in the seventh round, to finish Joshua and to become the new IBF, WBA (Super) and WBO heavyweight champion of the world at Madison Square Garden and before a global audience on DAZN.

With the massive upset, Ruiz (33-1, 22 KOs) becomes the first fighter of Mexican descent to be crowned world heavyweight champion.

"I just feel so good, man!" Ruiz said in his post-fight interview with DAZN's Chris Mannix. "I just made history, baby — for Mexico!"

Joshua (22-1, 21 KOs) suffered the first loss of his career. He handled the defeat with grace.

"It's no excuses, it's my own fault," Joshua told Mannix.

Joshua struck first, dropping Ruiz in the third round with a left hook. Ruiz got right back up and dropped Joshua with a left hand on the temple, which rocked AJ and gave him instant shaky legs. With Joshua against the ropes, Ruiz knocked him down yet again with a straight right hand.

Joshua seemingly got his legs back by the fifth round, but Ruiz ended the show with two more knockdowns in the seventh. Referee Michael Griffin checked with Joshua to see if he was able to continue and didn't get the response he was looking for. Griffin ended the bout and gave Ruiz the massive upset victory.

Here is what happened at Anthony Joshua vs. Andy Ruiz Jr.

Round 7: Ruiz drops Joshua yet again. Wow! And again. The ref checks with AJ, asking him if he's ready to continue to box and doesn't get the answer he needed. It's over! Monumental upset for the ages! Andy Ruiz Jr. is the new unified heavyweight champion of the world.

Round 6: A much-needed round for Ruiz as Joshua began to get some momentum back in the fifth round. Ruiz went hard to the body and made Joshua pay for fighting tentatively. (10-9 Ruiz, 57-56 Ruiz)

Round 5: Good bounce-back for Joshua. He started going back to the jab and landed a flush left hook. Ruiz needs to pick it back up and go for the overhand right. (10-9 Joshua, 47-47)

Round 4: After a sensational round, Joshua was tentative and Ruiz took his foot off the pedal even though he was the more active fighter. He could have finished Joshua off there and failed to do it. Will it cost him? (10-9 Ruiz, 38-37 Ruiz)

11 p.m.: Joshua is going to have to earn this title defense.

Round 3: What a round! Joshua appeared to have Ruiz put away when he dropped him with a left hook but Ruiz vailantly came back and dropped Joshua with a left hand. Joshua was on shaky legs the rest of the round. With Joshua's back against the ropes, Ruiz dropped Joshua one more time with a straight right hand. Joshua barely made it up at the count of eight and the round came to a close. This is Ruiz's fight for the taking. (10-8 Ruiz, 28-28)

One of the greatest rounds in heavyweight championship history 😯

Round 2: Ruiz came right out and connected on a couple jabs and a nice right hand, but he failed to do that the rest of the round. Joshua continues popping the jab and landed a hard right hand. (10-9, 20-18 Joshua)

Round 1: Joshua boxed the entire round by jabbing on the outside and feeling out Ruiz, who needs to get on the inside and let Joshua know he's there. (10-9, Joshua)

10:35 p.m.: Here comes the unified heavyweight champion of the world, Anthony Joshua. What an ovation for the three-belt holder.

10:30 p.m.: Anthony Joshua and Andy Ruiz Jr. about to make their walks to the ring. Ruiz is making his walk first.

10:27 p.m.: It is time for the main event of the evening: Anthony Joshua puts his IBF, WBA (super) and WBO heavyweight championships on the line against former title challenger Andy Ruiz Jr.

Joshua (22-0, 21 KOs) is making his United States debut and is looking to put on a show for the American audience. Can Ruiz quiet those who say he has absolutely no chance to win?

10:07 p.m.: Smith def. N'Dam by knockout at 2:56 of the third round to retain the WBA (Super) super middleweight title. A spectacular performance by Smith. The Englishman scored two knockdowns in the first two rounds and put N'Dam away with a powerful straight right hand that sent N'Dam's head bouncing off the canvas. N'Dam struggled back to his feet, but the referee had seen more than enough and put a halt to the fight. A good stoppage by the referee.

Smith more than made his case for a bout in the fall with Canelo Alvarez, who has brought Smith up as a potential opponent for the past three months. Alvarez likes the toughest challenges, and Smith fits the bill. Watching Smith this evening would make it a highly entertaining fight, but he shouldn't wait for Alvarez. There are plenty of good fights out there for him to take at 168 pounds.

10 p.m.: Callum Smith is making his case for a Canelo fight stronger by the minute.

Round 2: Somehow N'Dam made it through the round, and it wasn't like Smith was holding back. He landed another left hook to send N'Dam back to the canvas for the second time. N'Dam has to figure something out and in a hurry. (10-8, 20-16 Smith)

Round 1: What had been a methodical first round changes when Smith blasted N’Dam with a check left hook with 20 seconds left. N’Dam tried to get up and was extremely wobbly on his way back up. Don’t know how he survived the round, but don’t expect N’Dam to make it out of the second. (10-8 Smith)

9:40 p.m.:  It is time for the co-main event of Anthony Joshua vs. Andy Ruiz, as Callum Smith defends the WBA (super) super middleweight championship against former two-time middleweight champion Hassan N'Dam. Smith (25-0, 18 KOs) put himself on the world stage back in September when he knocked out George Groves in the seventh round to not only capture the WBA title, but win the World Boxing Super Series tournament.

N'Dam (37-3, 21 KOs) has won six of his last seven. An interesting fact about N'Dam is the fact he's fought in nine different countries. The knock on N'Dam is that he can't win the big one losing to Ryōta Murata, David Lemieux and Peter Quillin. He gets one more shot at glory against the guy people feel is the best super middleweight in the world.

Should be a cakewalk for Smith, who could be one fight away from taking on Canelo Alvarez in September.

9:32 p.m.: Taylor def. Persoon by majority decision (96-94, 96-94, 95-95) to become the undisputed women's lightweight champion. Not to take anything away from Taylor, because she's a great fighter, but it's hard to believe she won. Persoon was the aggressor the entire fight, landed the cleaner shots and threw more punches.

When asked about a rematch by Chris Mannix, Taylor was hesistant and brought up facing Amanda Serrano next. Would find it hard to believe when Taylor looks back and rewatches the fight that she believes she actually won. Persoon deserves another crack as she left no doubt who the better boxer was on this evening.

9:15 p.m.: A flush straight right hand from Persoon and another right wobbled Taylor. Taylor is in trouble. Needs a strong final two rounds.

9:12 p.m.: Hard fight to score heading into the eighth round. Persoon's face is all bruised up, but is being more active.

9:07 p.m.:  A fun contest thus far through five rounds. If Taylor fights on the outside, she can win using the jab. Persoon is relentless. Even if she gets hit, she keeps trucking forward and throwing power shots. Watch for a cut on the bridge of Taylor's nose. Let's see if Persoon captializes and pounces on it. An exciting second half of the fight is ahead of us.

8:58 p.m.: Persoon fighting like she has nothing to lose afrer two. She's forcing the action and making Taylor work. She's going to be active and keep the foot on the gas pedal.

8:43 p.m.: The main card of Anthony Joshua vs. Andy Ruiz begins with Katie Taylor and Delfine Persoon meeting for the undisputed women's lightweight championship. Taylor (13-0, 6 KOs), the IBF, WBA and WBO titleholder, is coming off a ninth-round TKO victory over Rose Volante in March to add the WBO belt to her collection. Persoon (43-1, 18 KOs), the WBC champion, looks to defend her title for the 10th time.

Persoon is by far the stiffest test of Taylor's stellar career. Whoever wins becomes only the third women's undisputed champion (Cecilia Breakhus and Claressa Shields being the others).

The arrival of Anthony Ruiz at Madison Square Garden as he looks to spoil the U.S. debut of Anthony Joshua. #JoshuaRuiz pic.twitter.com/5bGXQKsEay

8:05 p.m.:  Anthony Joshua enters MSG for his first fight in the United States.

7:10 p.m.:  Welcome to live coverage of the heavyweight title fight between IBF, WBA (super) and WBO champion Anthony Joshua and Andy Ruiz Jr. Grab the refreshments, kick back and follow along on what should be an amazing night of action.

— Austin Williams def. Quadeer Jenkins by knockout in the first round; middleweights

— Joshua Buatsi def. Marco Antonio Periban by TKO at 1:39 of the fourth round; light heavyweights

— Chris Algieri def. Tommy Coyle by TKO at 3:00 of the eighth round; junior welterweights