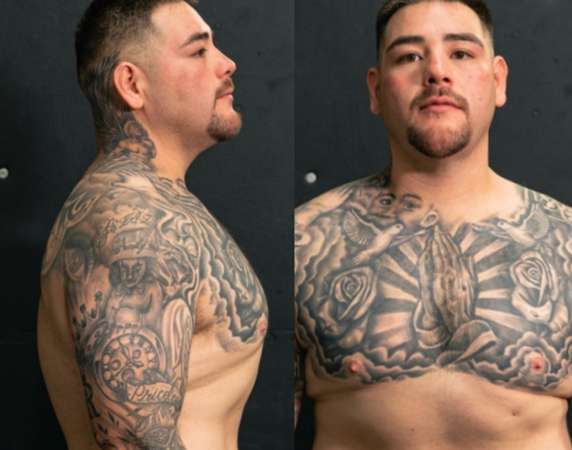 Trained by Eddy Reynoso, Ruiz begins his climb back up the heavyweight mountain May 1 in a fight against Chris Arreola. A win there could present a clash with Deontay Wilder, Ruiz believes.

The latter was where Ruiz was at following his December 2019 loss to Anthony Joshua in their rematch six months removed from Ruiz becoming the first heavyweight champion from Mexican descent in one of the most shocking upsets in boxing history.

Ruiz tipped the scale entering that rematch with Joshua at over 283 pounds and proceeded to be victimized by AJ’s jab over a 12-round unanimous decision defeat. But worse than surrendering the unified heavyweight crown back to the British Adonis was being stripped of his confidence and left in a pit of self-loathing.

“There was one moment, I was so down in my life,” Ruiz tells DAZN News of the aftermath of that loss. “I was depressed, I was crying that I needed to make a change.”

That change came in the form of Eddy Reynoso and being welcomed into the Canelo Team — something that Ruiz made official in May 2020. Reynoso, the trainer that has helped guide Canelo Alvarez into becoming a four-division world champion and arguably the best boxer on the planet, believes that he can help Ruiz on his climb back to the top as well.

Ruiz begins that trek back up May 1, when he takes on battle-tested warrior Chris Arreola at the Dignity Health Sports Park in Carson, Calif. Being trained by Reynoso has the 31-year-old Ruiz feeling like this is a career restart.

Ruiz is already showing that motivation and urgency, having dropped nearly 50 pounds since that loss to Joshua. Working alongside Canelo only amplifies his target of becoming a two-time heavyweight champion of the world.

Prior to joining Reynoso and the Canelo squad, Ruiz says he was guilty of only training in camps for upcoming fights — not in between them as a lifestyle.

“Canelo been telling me that this is a daily routine, life routine that we need to stay focused,” Ruiz says, “stay disciplined.”

Not to mention, stay ready to respond in any situation in the ring, as Reynoso is ensuring Ruiz does. Building on the hand speed that catapulted Ruiz into a world champion, Reynoso has taken the 12-year pro and brought him to the basics — punch by punch.

“I’ve learned a lot from every trainer I’ve had, but with Eddy, you have to perfect every single punch, every single movement,” Ruiz says. “If you bob and weave, you best believe that he wants to counterpunch. If there’s an open spot to throw punches, he tells us to take advantage of that.

“We work on the left hand a lot — on the jab, on the hook, on the body, doing a lot of tricks here and there,” Ruiz continues. “He has a lot of skills.

“Canelo, too, he’s showing me a lot of tips when I’m sparring, hitting the bag or how I should throw my punches to be more effective,” he adds. “(Reynoso) loves to perfect every single thing that we do in the gym.”

So, how do you exactly perfect a punch? Ruiz says Reynoso isolates each punch and has him work on it with each hand with pinpoint accuracy.

That diligence should be on full display against Arreola on May 1, when the new and improved Ruiz will be looking to make a statement and perhaps even punch a ticket for his next big fight.

With Joshua and Tyson Fury tied up for an impending undisputed heavyweight championship showdown, Ruiz thinks a bout against fellow former world titleholder Deontay Wilder may spell the key needed to book a bout against the winner of Joshua-Fury.

“We have been looking for that fight for a long time and it kind of works out because Tyson Fury beat (Wilder), Anthony Joshua beat me,” says Ruiz.

The first Wilder-Fury tilt back in December 2018 wound up in a controversial split draw, with many believing that Fury did enough to win, while many others feeling like Fury benefitted from a long count on a knockdown registered by Wilder. That was before Fury demolished Wilder via seventh-round TKO in their rematch in February 2020.

That being said, Ruiz believes a fight with Wilder makes sense.

“It ends up (fitting) together,” Ruiz comments. “That would be a really interesting fight. That’s fight is easy to make because we’re in the same promotion company (PBC). I know that Anthony Joshua has a rematch clause against Tyson Fury, so the main thing is to stay busy, stay disciplined and stay active.

“The thing that I want to do is bounce back,” Ruiz says with renewed energy, “and try to become the two-time heavyweight Mexican champion of the world.”