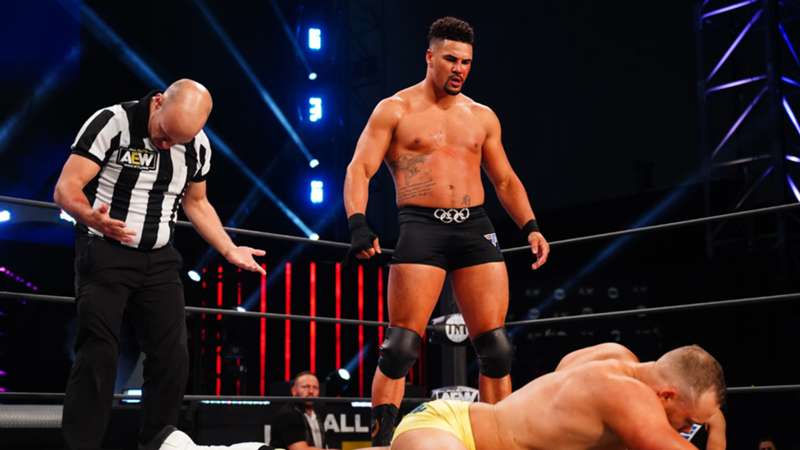 Exclusive interview: The London 2012 Olympian turned professional wrestling star knows a thing or two about career-ending eye injuries like the one Canelo inflicted upon his May opponent.

All Elite Wrestling's recent 'All Out' pay-per-view in Chicago, Illinois made global headlines thanks to its thrilling matches, the in-ring return after seven years of CM Punk and the show-closing debuts of both Adam Cole and Bryan Danielson. However there were also a number of big roster names who were not on the monumental show.

One of those was Great Britain's Anthony Ogogo, the former Olympic boxer who turned to professional wrestling training after suffering a career-ending eye injury. He had competed in his first PPV bout at the company's last offering, 'Double Or Nothing', back in May in a narrow defeat to Cody Rhodes. However the rookie's rapid upward trajectory was soon halted by another injury which put him on the backburner for several months.

It did, however, leave him free to enjoy All Out as a fan, attending Hooked On Wrestling's live watch party at the Sports Bar and Grill in Old Street, London. HOW stage screenings across the UK for all major wrestling events, including Wrestlemania, Summerslam, Royal Rumble and more.

While enjoying his colleagues' efforts from the comfort of a London sofa, Ogogo spoke exclusively to DAZN about why exactly he was back home while healing as opposed to his work residence in Atlanta, Georgia.

"Billy Gunn and his son smashed my face," explained Ogogo in reference to the injury which took place shortly after his PPV loss to Rhodes. "It fractured my nose and aggravated my pre-existing eye injury, so I needed to get it fixed. I preferred to see the doctor I saw the first time here in the UK and now because of COVID it’s hard to get back.

"COVID has messed the whole world up, hasn’t it, but now I’m rested up and ready to be back in the ring as soon as I can get back over."

Talk soon moved to Ogogo's former occupation, boxing. And just a couple of weeks before the highest-profile moment of the Lowestoft man's wrestling journey so far, fellow Brit Billy Joe Saunders stepped into the ring against pound-for-pound king Canelo Alvarez in a huge super-middleweight unification clash.

At one point, Ogogo vs. Saunders appeared to be a very marketable future bout at middleweight, but Anthony's eye injury ensured it was never to be. And though there's no love lost between them, Ogogo admitted he does not want to see 'BJS' lose his livelihood the same way he did, after Canelo fractured his eye socket with a brutal fight-winning shot in Texas.

"Saunders and I don’t really get along, we never have," admitted Ogogo.

"I’ve known him for a long time, but I knew Canelo would smash him up. He’s too big, too strong, and Saunders got found out at that level.

"Obviously I don’t want to see him have to retire because of the injury, and if he can get back in there one day I wish him the best.