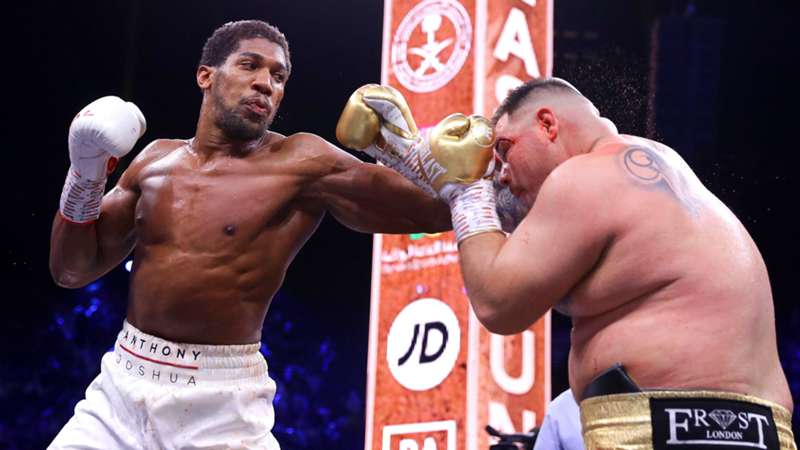 From his awe-inspiring victory over Wladimir Klitschko to avenging his one loss against Andy Ruiz Jr., the two-time unified world heavyweight champion has given fans plenty of thrills when it has mattered most.

Anthony Joshua has sparked plenty of electricity when it has mattered most during the biggest fights of his career. As the two-time unified world heavyweight champion prepares to defend his crown against Oleksandr Usyk on Saturday night, we look back at five times that he produced the goods underneath the bright lights.

Nobody saw Ruiz's seventh-round TKO of Joshua just six months prior coming. That June 1 upset heard around the world had Ruiz dropping AJ four times en route to snatching the unified world heavyweight crown in dramatic, shocking fashion as a 25-1 underdog. Making matters worse for the British star was the fact that the pressure was on him more than Ruiz entering their rematch at the Diriyah Arena in Diriyah, Saudi Arabia. Well, Joshua didn't disappoint. AJ was poised in asserting his jab and disciplined enough to not be baited into another slugfest. The result was a boxing masterclass by one of the sweet science's most fearsome finishers to reclaim the unified world titles.

Parker entered the bout at Principality Stadium in Cardiff, Wales as a heralded fighter himself. The fact that he carried the WBO world heavyweight title only upped the ante. Once Joshua established his front foot and that pointed jab behind it, there was no stopping the Briton from dominating Parker. Although his 20-fight knockout streak came to a screeching halt, judges scoring it 119-109 and 118–110 twice in his favor spoke volumes to AJ being able to deliver the goods under the bright lights. Not to mention, snatch some more hardware in the process.

In front of a raucous crowd of 90,000 fans at Wembley Stadium in London, Joshua sparked his most scintillating performance. The unified world title tilt had all the markings of high drama, including Joshua knocking the Ukrainian down behind a bevy of punches in the fifth round only for Klitschko to return the favor during the sixth. That set the stage for back-and-forth action until the 11th, when Joshua chopped Klitschko down with a massive left hand and later smothered him with punches in the same round to be coronated boxing's new king. Joshua left Wembley with the WBA (Super) title to add to his IBF strap. Just like that, the liftoff of Joshua into superstardom was on.

It didn't take long for then-IBF world heavyweight champion Charles Martin to realize that the 2012 Olympic gold medalist was for real. Two rounds to be exact, as Joshua put the American on his backside via a sharp right hand and again with a right hook that he absolutely sat on for the thrilling KO. And the new ... as the bout marked the first time that Joshua became a world heavyweight champion.

Against his fellow Briton, Joshua survived his first real scare of his pro career during the second round when Whyte buzzed him with a left hook to the temple. The pulverizing shot put AJ on jelly legs as the wobbled warrior had to battle through the turbulence to survive the frame. And when he did, Joshua made sure to never look back as he detonated a huge right uppercut that dropped Whyte in a heap for the electric seventh-round TKO finish.

Will a scintillating performance against Usyk be added to his collection of hits? Find out Saturday night live on DAZN.