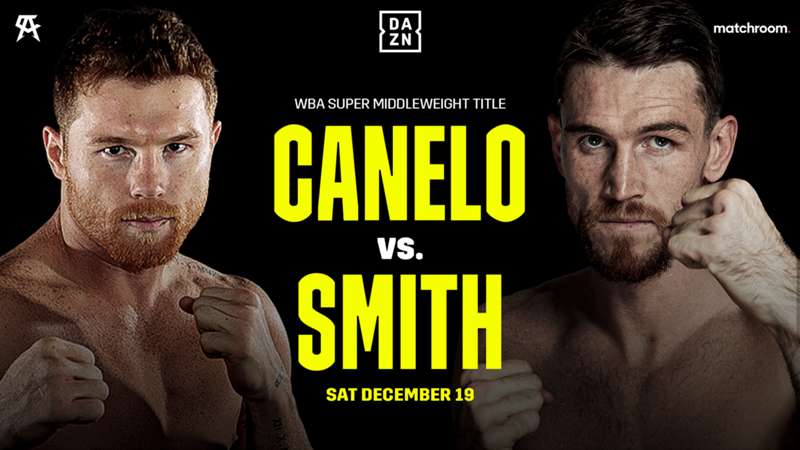 Boxing's biggest star returns to the ring against arguably the best super middleweight in the world on DAZN.

Canelo Alvarez has never been one to shy away from challenges. After a long absence, the four-division world champion will make his return to the ring and face one of his toughest tasks to date.

Alvarez announced on Instagram that he's returning to the ring for the first time in 2020 against arguably the best super middleweight in the world, The Ring and WBA super middleweight champion Callum Smith, on Saturday, Dec. 19. The 168-pound clash will take place at a site to be determined and stream live globally on DAZN (excluding Mexico).

Alvarez (53-1-2 36 KOs), the WBA and WBC "Franchise" middleweight champion, steps back into action for the first time since defeating Sergey Kovalev by 11th-round knockout in November 2019 to capture the WBO light heavyweight title. This will be the second time Alvarez competes at 168 pounds. He defeated Rocky Fielding via third-round TKO in December 2018 at Madison Square Garden to capture the WBA (regular) super middleweight belt.

“We’re thrilled to work with Canelo Alvarez, Eddy Reynoso and Matchroom on this new venture,” said Ed Breeze, DAZN EVP, Rights. “Canelo vs. Smith is a perfect fight to support DAZN’s global launch in December as we look forward to introducing the platform to sports fans around the world.”

Smith (27-0 19 KOs) has been looking for the big fight and finally gets what he's been asking for against boxing's biggest star. "Mundo" fought on the Canelo-Fielding card, defeating Hassan N'Dam by third-round TKO. He won the WBA title by knocking out George Groves in September 2018 at the World Boxing Super Series final. The Englishman last competed in November 2019, beating John Ryder via unanimous decision.

“I’m delighted to be part of this huge fight to close out 2020 and deliver this opportunity for Callum Smith,” said Eddie Hearn, managing director of Matchroom Sport. “Canelo is a fearless competitor who constantly challenges himself against great champions and this will be a thrilling battle for 168lb supremacy. It’s a pleasure to be working with Canelo and Eddy Reynoso and we look forward to a spectacular event on December 19.”