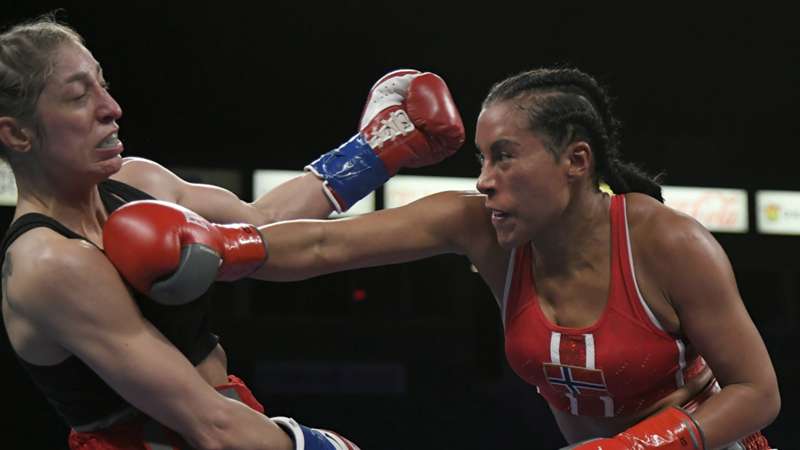 The reigning female undisputed welterweight champion is taking her talents to the global streaming service.

After agreeing to a multi-fight on Monday with Matchroom Boxing, the woman some boxing pundits feel is boxing's pound-for-pound female queen, Cecilia Braekhus, has her first fight with her new promotional outfit. The undisputed female welterweight champion will defend her WBA, WBC, IBF, WBO titles against Victoria Bustos on Saturday, Nov. 30 in Monte Carlo, live on DAZN.

Braekhus (35-0, 9 KOs) last fought in December, beating Aleksandra Magdziak Lopes by unanimous decision to retain her championships. The "First Lady" first became a world champion back in 2009 when she captured the WBA and WBC titles from Vinni Skovgaard. She added the WBO belt to her collection one year later by beating Victoria Cisneros in May 2010. The 35-year-old become the four-belt titleholder when she took the IBF strap from Ivana Habazin in September 2014.

Braekhus looks forward to making her 2019 debut and putting on a show to remind the world how good she is.

"I'm very excited to fight on November 30 in Monte Carlo and be part of the region's rich history of compelling fights and extraordinary sporting events," Braekhus said in a press release. "I'm sure that Victoria Bustos will provide a tough challenge, but I have prepared well and look forward to putting on a great performance for my fans in attendance and those watching all over the world."

Bustos (19-5, 0 KOs) has won four of her last five fights, including a unanimous decision victory over Enis Pacheco back in December. The 30-year-old understands the golden opportunity presented to her and plans to make the most of the chance at making history.

"For me, this is a new and huge opportunity to dispute the world titles against the champ Cecilia Braekhus, an opportunity which fills me with joy and happiness," Bustos said. "To take up this challenge I have moved up one category, doing a great job with my whole team. I am well prepared for this fight. I won’t let this chance pass, giving a great show and a great fight.

"This fight will be dedicated to all the boxing fans around the world who love this sport and support female boxing. I am thankful to everyone who always supports me, especially my family and my dad who is still present in my corner even though he is physically absent."