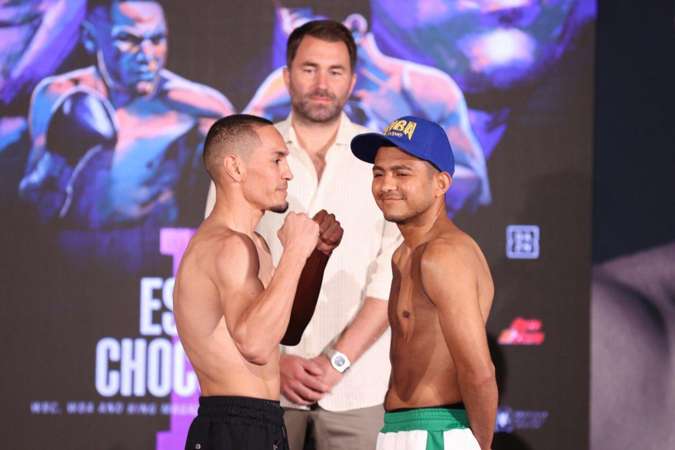 What a war these rivals had.

Is it too early to ask for a trilogy?

Juan Francisco Estrada and Roman 'Chocolatito' Gonzalez combined for a ridiculous record of 2,529 punches thrown in a super flyweight division fight Saturday night. After the fireworks finally ended, Estrada had his hand raised by split-decision, although one could argue that the fight could have been decided for Gonzalez just as fairly. Judges at the American Airlines Arena in Dallas had it scored 117-111, 115-113 and 113-115 to give Estrada the split decision victory, as he not only walked away as the WBA/WBC unified world champion, but also with revenge served from his November 2012 unanimous decision loss to 'Chocolatito.'

"I think I did enough to deserve to win," said a victorious Estrada, who had just finished throwing a career-high 1,212 punches, despite being outlanded by 77 punches. "'Chocolatito' is a great fighter and I think he deserves the trilogy."

Estrada and Gonzalez delivered nonstop fire in the phone booth in a bout that really could have gone either way. The last several rounds had both champions forehead-to-forehead, essentially taking turns punching and counterpunching, with neither budging. Perhaps Estrada said it best:

The urgency from both fighters showed in the 12th and final round, where they combined for 95 punches — 90 of them being power shots.

The bout was so thrilling that Estrada sounded more than willing to treat a third fight with Gonzalez with higher priority than a trilogy with his mandatory challenger and rival, Srisaket Sor Rungvisai, who he is 1-1 against.

"Rungvisai is a mandatory, so I'll look at that," Estrada added, "but I'll approach a third fight any day with 'Chocolatito.'"

Gonzalez is up for fighting either.

This is how the entire Estrada vs. Gonzalez card went.

facebook twitter whatsapp
Michael Buffer goes to the cards, where judges have it 115-113 for Gonzalez, 117-111 for Estrada and 115-113 for ... Estrada, who gets his revenge and becomes a unified super flyweight champion of the world.

The 12th and final round. Both fighters embrace in the center of the ring and touch gloves, saluting each other for one hell of a fight. They come out swinging, once again forehead-to-forehead. DAZN announces that they have once again broken the 2,000 punches thrown mark. What a fight this has been. Both exchanging fire, with Estrada getting the better of them right now. But Gonzalez rages back with a right that Estrada counters. This is insanity! A left to the chest followed by a right across the chin that stuns Estrada! Left from Gonzalez, too. Twenty seconds. They won't stop punching. Ten seconds. More punches. Five seconds. And there's the final bell. They've done it again. What a war. (10-9 Gonzalez, 116-112 Gonzalez)

This is the TWELFTH round. 🔥 pic.twitter.com/A8RLCiyUFJ

facebook twitter whatsapp
Gonzalez' corner yearning for more, as if he hasn't given the most. Estrada with a blistering right hand, showing urgency in this championship round. A quick flurry follows. But Gonzalez buries his shoulder into Estrada's chest and launches short uppercuts inside. Both fighters slowing down, but willing to trade inside. Stinging inside right hand lands for Gonzalez. Estrada and Gonzalez are basically forehead to forehead, taking turns blasting each other with punches and counterpunches. Both fighters deserve this round ... it was that close. (10-9 Gonzalez, 106-103 Gonzalez)

Estrada's corner is telling him he's down on the cards and needs a knockout. Well, let's see how Estrada responds. While I don't think he's down by as much as his corner made it seem, Estrada needs to show more urgency than the older 'Chocolatito.' That's for sure. Gonzalez is already walking Estrada down, burying right hands into the body and piecing together stinging combinations. Now, a solid left hook from Estrada. The left-right hook connects for Gonzalez. Nonstop action. Counter right lands with impact for Estrada. Left from Gonzalez seconds later. (10-9 Gonzalez, 96-94 Gonzalez)

facebook twitter whatsapp
Left hook from Gonzalez. Estrada with a right moments later to brush Gonzalez back. They're on a pace to throw a combined 2,000-plus punches. Gonzalez seemingly slowing down and being more premeditated in the ring. Left-right combination from 'Chocolatito,' who is back into a groove. Still, he's got to be concerned because Estrada looks to have the slightly fresher legs as of now. Big pressure from Gonzalez, who won't stop moving forward. His aggression and activity paves the way for the WBA champ to nab this round, too. (10-9 Gonzalez, 86-85 Gonzalez)

Gonzalez and Estrada trade right hands to open things up this round. 'Chocolatito' with an overhand right. They landed a combined 95 punches the last round. Gonzalez digs into the body of Estrada now, too. Overhand right from Gonzalez. Estrada is walking Gonzalez down. We didn't see this in their first fight nearly nine years ago. Gonzalez lunges and connects on a left hook. He takes this round. (10-9 Gonzalez, 76-76)

Gonzalez splits Estrada's guard with an uppercut to start the round. He lands an overhand right, which thuds off Estrada's temple seconds later. A right-left hook combo lands for 'Chocolatito' as well. But now, a big right-hand connects for Estrada. These two are relentless! Absolutely relentless. Crunching uppercut from Gonzalez, but Estrada counters with a sharp right hand. What a round! What a fight! The slightest edge to Estrada there, but this round and others could easily be argued the other way. (10-9 Estrada, 67-66 Estrada)

facebook twitter whatsapp
Very evenly-matched through four. Gonzalez catches Estrada moving with a left hook. He adds a stiff right. And another. 'Chocolatito' seems to be packing more power behind his shots. Gonzalez lands a big right stepping in after changing angles. That veteran savvy. 'Chocolatito' adds a quick combination, ending it with that long jab. Estrada lands with a right hook. Fast and furious rounds here. (10-9 Gonzalez, 48-47 Gonzalez)

Gonzalez digs into the body. Estrada returns fire upstairs moments later. Gonzalez is moving forward, giving chase and burying a shot into the body. Gonzalez with a left to the body and a right across the jaw, as spit flies out of Estrada's mouth. Both fighters catch each other upstairs. Estrada with a flurry of activity, which Gonzalez eats and moves forward from. Estrada needs to stay off the ropes. Estrada with a straight right. Gonzalez with a shot of his own. (10-9 Gonzalez, 29-28 Gonzalez)

Fiery exchange early into the round. A relentless, frenzied pace from both fighters. What else would you expect? Gonzalez is shifting angles and popping Estrada with a right hand, which seems to be a big weapon already. 'Chocolatito,' like the great he is, already making key adjustments from that first round. (10-9 Gonzalez, 19-19)

facebook twitter whatsapp
Estrada throws first punch as he said he would. Estrada sets early tone as the boxer-puncher. (10-9 Estrada)

Bell tolls 10 times in tribute of the late Marvin Hagler

facebook twitter whatsapp
Eloquent words from Michael Buffer, paving the way for this in-ring salute to one of boxing's all-time greats, Hagler, who died Saturday.

facebook twitter whatsapp
"If Katie Taylor is the next one, let's go. If Claressa (Shields) wants to come down to 147 (pounds), see if she could make the weight ... we got a lot of options."

After 10 rounds, judges see it ... well, not quite, as there seems to be some kind of delay with the announcement.

OK, here's the announcement. Judges have it 100-89, 99-90 and 98-91, all three in favor of McCaskill, who remains the undisputed welterweight champion of the world. Thought it was closer, but the right boxer definitely won.

McCaskill's corner lets her know not to take her foot off the pedal in this 10th and final round. Left hook lands for McCaskill, with some shorter punches inside coming after. Braekhus with some clean, stiff shots inside moments later. Only 45 seconds left. Left hook lands for Braekhus. And a right hook as well. Strong round for Braekhus, but it doesn't look it was enough. Like their first fight, McCaskill was the aggressor, with Braekhus digging her way into the fight. This rematch should generate the same results, with McCaskill having her hand raised. But let's see how judges have it. (10-9 Braekhus, 96-93 McCaskill)

Braekhus comes out doubling up on a left hook. She needs a lot more of that action. Both fighters exchange short, powerful shots inside. Welt on the forehead of Braekhus courtesy of McCaskill's heavy hands. McCaskill is digging into the body now as well. Braekhus catches McCaskill with a right to the head coming in. Close round, with McCaskill getting the slight edge. Two minutes left. (10-9 McCaskill, 87-83 McCaskill)