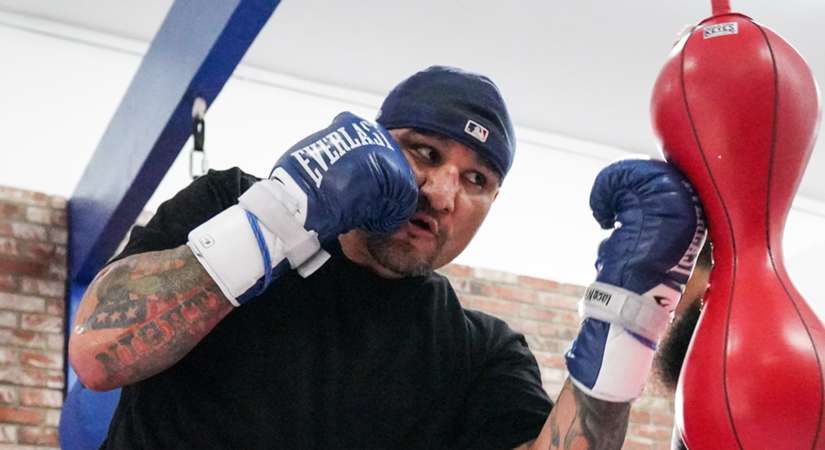 The former heavyweight title challenger is ready for an all-Mexican war with Andy Ruiz Jr.

In his storied career, Arreola has competed for the heavyweight championship three times. Unfortunately, he came up short on each occasion to Vitali Klitschko, Deontay Wilder and Bermane Stiverne.

A win over Ruiz would likely give the 40-year-old one more crack at capturing gold.

"@nightmareboxing is a veteran, warrior and game player. So, when he goes in the ring on fight night the switch goes on."— Joe Goossen#RuizArreola | SATURDAY | Buy PPV: https://t.co/yaVe8YQtKy pic.twitter.com/oWBDeWNEf4

Ahead of his clash with Ruiz, Arreola sits down with DAZN News to discuss 2020, why he felt that he and Ruiz were on a collision course to fight, and his thoughts on how Ruiz handled himself after becoming heavyweight champion.

DAZN: 2020 was basically a lost year for everybody. How would you view 2020 professionally and also personally?

Chris Arreola: Professionally like luckily, I had nothing going and just recovering at home and training at home. I'm lucky enough that in my garage, I have my own boxing gym. I have all the equipment that I have in here. So I really didn't lose no time because I work three days a week just maintaining my boxing shape. But personally, man, I feel bad for my daughter that lost her senior year. She lost her senior year in softball. I feel bad for my son that lost two seasons of baseball. I feel bad for everyone that lost a job, small businesses that lost their business. I feel bad for those people because they really had a rough time. I'm a lucky man. I just fight for a living. I get beat up for a living. I'm a fortunate man in that sense. My kids are probably the ones that suffered the most.

DAZN: Do you feel like 2020 allowed you to get your body a chance to recover from all the wars you've been in?

CA: Not only did I get a chance to recover, but I'm used to layoffs. This is my third layoff that I've had. I had a two-year layoff and then a one-year layoff. Boxing is like riding a bike. The thing is to get back in the ring, spar, and then the timing comes back. But luckily, boxing is one of those sports that a lot of boxers don't need many fans. Just throw them in a warehouse and make it happen.

DAZN: A lot of people were wondering who Andy was going to face when he returned. We hadn't seen him since the Anthony Joshua fight. When did you first hear that this could have been a possibility to meet Andy coming up next?

CA: I'd heard (rumors) all 2020. There were a couple of times I heard I was going to fight him in December. Then they moved on to sometime in March, then April, then May. Luckily, I've been out here with Joe (Goosen, his trainer) since January. But before that, I was coming here two-three days a week just to maintain and stay in shape. But the thing is, I've always had him in my mind. I always had in the back of my head that it's a possibility that I was going to fight him. If not him, then someone to chew me up to fight him. Regardless, I was offered a challenge. This is a great challenge. This is a Mexican challenge. A challenge that I never had before. A challenge like him is not only as your ex-champion, but he has dynamite in both hands, speed in both hands.

I look forward to this fight. It should be an epic fight.

DAZN: Why did you feel like this fight was destined to happen?

CA: First, first and foremost, because we're both Mexican fighters. We're both elite Mexican fighters. We're not just big Mexicans for no reason. We're big. We love what we do. We're great fighters. He started his amateur career at a young age. I started my amateur career at a young age. We sparred once while he was still amateur. I knew one day this is a guy I'm going to have a fight with, or someone else is going to have to deal with and might as well be me. Since that day, I've always had it in the back of my mind. I've always thought that me and him were going to fight each other. We're going to make a great fight.

DAZN: In the Joshua rematch, he came in extremely overweight. He looked sluggish. He didn't look like the guy six months earlier that wiped Joshua to the floor. He admitted that he got overweight, and he partied like he was the heavyweight champion instead of staying focused. What did you make of how he took that second fight as he didn't seem like he took it too seriously, and he paid the price for it?

CA: All those people that like judge him for partying and doing all kinds of shit that he didn't do before, put yourself in his shoes. I don't judge him. I would have probably been doing the same thing as he was. It's hard for someone having nothing to having everything. Everything is in your hands. You could do no wrong. Do you blame him? Honestly? Do you writers honestly blame him for him coming out of shape or going to party, having a good time, and enjoying his life? I don't blame him one bit. I probably would have done the same thing. But the thing is, how do you recover? How do you come back from that? That's where I come in. That's why I'm coming in great shape. Because I know he's going to come for my head. I know he's going to try to make a statement with me like every fighter does. I feel like every fighter tries to make a statement with me. That being said, he's coming in the best shape of his career, and I'm coming in great shape. It just calls for a great fight.

DAZN: The narrative has been, he took this fight because maybe you're on the back end of your career, and you're more or less a tune-up fight. What do you say to those people?

CA: Look at the man. If he's not taking me seriously, I don't know what taking serious is because this guy's coming in great shape, great fighting shape, great boxing shape, great physical shape. If you're telling me that he's taking me lightly. I don't know who you're looking at because he looks like he's in the best shape of his career like I am. I'm in my best shape of my career because I'm taking him very serious, extremely serious. This is one of those make me or break me kind of fights. I have to come out, and I have to put on a great show for the fans. I'll put a great show for myself, for my family, and just do it. What I want is another big fight.