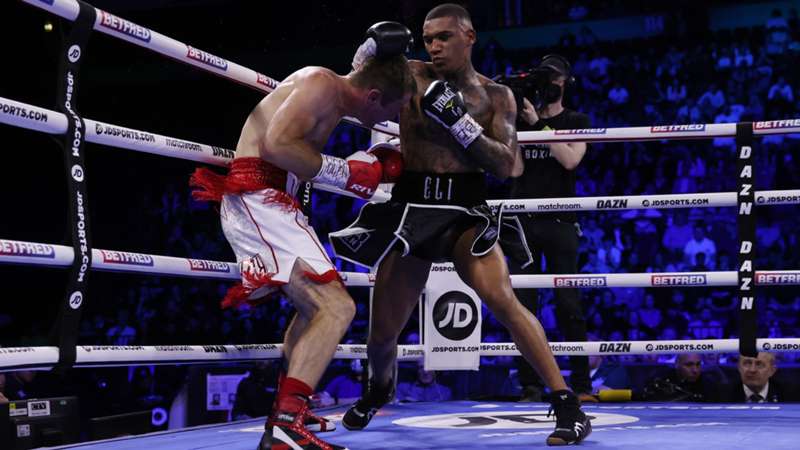 Conor Benn’s rapid ascent up the rankings gained more momentum as he blasted Chris Van Heerden in two rounds in front of a boisterous Manchester crowd. The experienced South African was brought to Britain to provide Benn with a test, but like the majority of Benn’s recent opponents, he was overpowered with ease.

Van Heerden will have been happy with the start he made as he settled into an early rhythm and was able to land on Benn. The Essex fighter’s typical fast start saw him unsettle Van Heerden on the odd occasion, but after the opening session, it appeared that the audience was in for an interesting fight. That thought was quickly extinguished.

A well-timed right hand at the start of round two hurt Van Heerden and it was obvious that the former IBO world champion was not going to recover. Benn continued his attack and managed to floor Van Heerden and with the third man halfway through his count, he decided to call things off as Benn wildly celebrated.

With another big test routinely passed, the time to step Benn up is fast approaching. Eddie Hearn listed multiple names in the post-fight interview such as Mikey Garcia and Kell Brook, and those would represent a significant leap in class for Benn. The 25-year-old has now proven himself beyond doubt at the level just below world class, and he’ll be backing himself to make the same impact when he jumps up later this year.

All updates from tonight's show can be found below.

Conor Benn wins in round two

facebook twitter whatsapp
It's all over in round two. Van Heerden looked lke he might be the man to test Benn but a solid right hand made the South African unsteady and Benn wasted no time in following up. With Van Heerden down and looking in no mood to continue, the referee stopped his count and ended the contest. What's next for Benn?

Benn vs. Van Heerden: Round One

facebook twitter whatsapp
Van Heerden will be satisfied with his start. He's weathered the anticipated storm from Benn and has also landed his own shots. Benn's industry gives him the opener but he'll be aware he's in a fight. 10-9 Benn.

facebook twitter whatsapp
There were many talking points when Chris Billam-Smith beat Tommy McCarthy at last year's Fight Camp. Many were split on the outcome but Billam-Smith removed any doubt tonight with an emphatic stoppage over the Belfast fighter. McCarthy started the better man, but once Billam-Smith got into the fight, he couldn't miss. In round eight, a left hook stunned McCarthy and the Bournemouth puncher was in mood to wait around. Another shot floored McCarthy and that was enough to end matters. Billam-Smith will surely look towards a world title fight next.

facebook twitter whatsapp
It's a brilliant fight between Chris Billam-Smith and Tommy McCarthy. The Belfast man started off well but Billam-Smith is finding the target far more frequently in recent rounds. Will this action continue?

facebook twitter whatsapp
It's going to be a long learning curve for Campbell Hatton, but he's picking up vital experience in each fight. There's no rush with him and that can only be beneficial and there's still a lot of things to be worked on. He was caught several times by Ezequiel Gregores and, against a better fighter, he could've been hurt. Despite the mistakes, Hatton was on the front foot throughout and  that relentlessness was enough to give him every round from the referee.

facebook twitter whatsapp
Alycia Baumgardner's rise continues as she makes a successful first defence of her wold title against Edith Matthysse. The American fighter was in control throughout as she bossed proceedings with her excellent jab. All three judges scored every round for Baumgardner and she can now look forward to a big fight later this year with Mikaela Mayer set to be in the frame.

facebook twitter whatsapp
Up next is America's Alycia Baumgardner. Last November, the Michigan fighter caused a mini upset when she stopped Terri Harper. Tonight she faces Edith Matthysse knowing that victory could set her up for a big fight later this year.

Cullen in another bruising fight as he outpoints Belujsky

facebook twitter whatsapp
Vladimer Belujsky earned every penny of his purse as he survived a number of tough moments against a motivated Jack Cullen. The Little Leaver man was under pressure to impress after losing to Kevin Sadjo at the backend of last year and he'll be satisfied with his night's work. Although he was the recipient of a number of heavy shots, Cullen always had the last word and that was reflected on Steve Gray's scorecard which read 80-72 in Cullen's favour.

The action is almost underway

facebook twitter whatsapp
A big night is expected in Manchester as Conor Benn takes on Chris Van Heerden. The atmosphere is warming up and DAZN will be providing all the night's big updates.