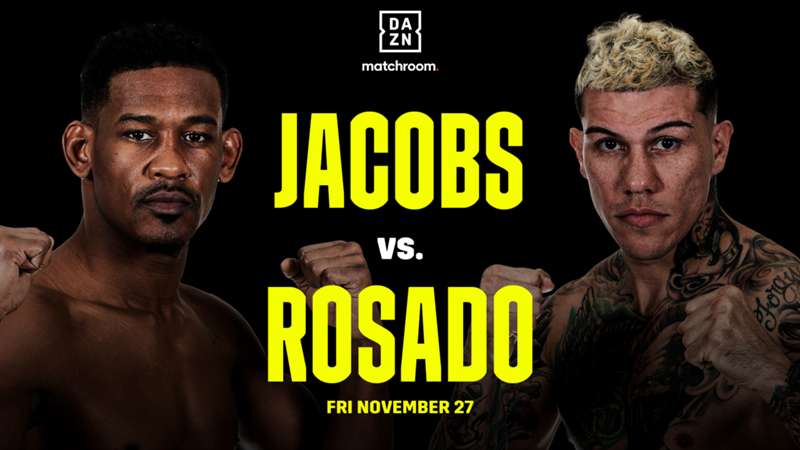 Click here to watch Jacobs vs. Rosado on DAZN

The animosity between Jacobs and Rosado came to a fever pitch when both fought on the same card last December. Jacobs was scheduled to headline the event against Julio Cesar Chavez Jr., and Rosado was scheduled in the swing bout with Humberto Gutierrez Ochoa.

Backstage after the weigh-in, Jacobs and Rosado got into a verbal altercation. They had to be separated and have been talking trash back-and-forth about the other since then.

To Jacobs, this fight is personal. "The Miracle Man" wants to quiet Rosado as he looks to continue the journey of becoming a two-division titleholder.

"Gabe talked his way into this fight, and now it's time to see if he can back it up," Jacobs said in a press release. "He's got a big mouth, and he's been bringing up my name constantly for over a year — but on November 27, the talking stops, and I can't wait to shut him up. My aim is to become a two-weight division world champion in 2021, and that starts with a big win in Florida. After that, I'm ready to step up and fight one of the world champions at 168 pounds."

For Rosado, taking on Jacobs means everything to him as he looks to make one final run at securing a world title shot before he hangs up the gloves.

"I'm really excited for the fight," said Rosado. "There's been a lot of back and forth between me and Jacobs, and for the fight to finally happen, I'm more than ready. I've started training camp with Freddie Roach in LA at Wild Card Boxing, and I'm just looking to put on one hell of a show for the fans. I'm definitely going to bring the fight to Danny, and it's going to be great."

Can Jacobs bottle his disdain for Rosado long enough to secure the victory? Does Rosado pull it off to secure one more world title opportunity?

Here’s a complete guide to the Jacobs vs. Rosado fight card.

When is Daniel Jacobs vs. Gabriel Rosado?

The Jacobs vs. Rosado card gets underway at 8 p.m. ET on Friday, Nov. 27. Jacobs and Rosado are expected to make their ring walks about 11:15 p.m. ET, but the time depends on the length of the earlier fights.

Jacobs vs. Rosado TV, live stream: How to watch

The Jacobs vs. Rosado fight isn't available via traditional pay-per-view or a linear TV channel. Boxing fans can instead sign up to watch the fight online with DAZN, the global sports live-streaming service. DAZN is available in the U.S., Canada, Germany, Austria, Switzerland, Japan, Italy, Spain and Brazil, and is expanding to include more than 200 countries and territories in December.

DAZN can be streamed on a variety of platforms, including Roku, Apple TV, Google Chromecast, Apple iOS, Android, Xbox One, Xbox Series X and S, Playstation 5, Playstation 4 and Playstation 3, many smart TVs, as well as Chrome, Firefox, Internet Explorer and Safari browsers via DAZN.com.

How much does the Jacobs vs. Rosado fight cost?

New subscribers to DAZN can sign up for a monthly subscription or annual pass to watch the fight. Pricing options vary by region.

In the U.S., the annual pass — which includes access to all of DAZN’s live events, as well as highlights, behind-the-scenes features and original shows — is $99.99. Those who prefer a monthly plan can sign up for $19.99.

Where is the Jacobs vs. Rosado fight?

The Jacobs vs. Rosado fight will take place at the Hard Rock Live at the Seminole Hard Rock Hotel & Casino Hollywood, Florida.

This marks the first time Jacobs and Rosado compete at the venue.