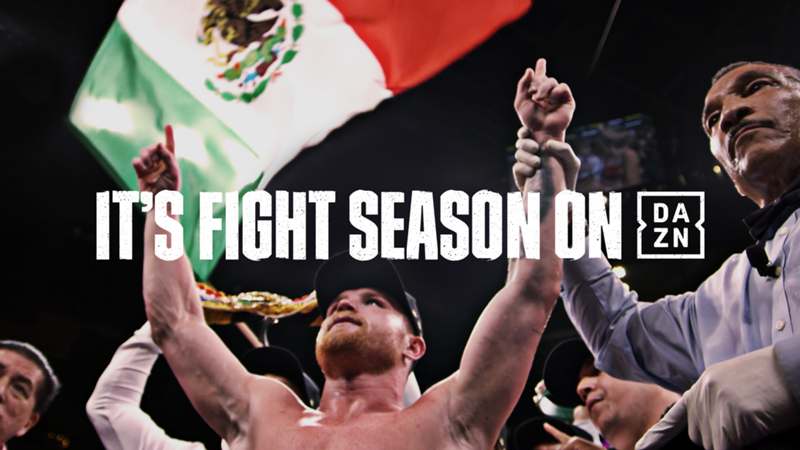 (DAZN)
Sign up to watch Fight Season on DAZN

Fight season is here, and DAZN is hoping its fall lineup will be a big hit with boxing fans.

The sports streaming platform plans to unveil its fall ad campaign during this week's "Sunday Night Football" matchup on NBC between the Cowboys and Saints, touting a "can't-miss" DAZN fight schedule that includes some the biggest names in boxing — Canelo Alvarez, Gennadiy "GGG" Golovkin, Anthony Joshua and Andy Ruiz Jr.

The 60-second ad splices footage of all four fighters, set to “The Impossible Dream." A 30-second version is scheduled to run on every "Sunday Night Football" broadcast through Alvarez's fight vs. Sergey Kovalev on Nov. 2. DAZN's campaign also includes planned spots around college football games, the English Premier League, and across various cable channels and digital platforms.

“Premiering our new campaign during Sunday Night Football is fitting given the parallels between the two sports,” said Robert Stecklow, SVP of marketing for DAZN North America. “Just as fans are used to football delivering an entire season of star athletes, big moments, and huge upsets, DAZN has introduced the concept of an entire fight season that is loaded week after week with incredible talent and can’t-miss action.”

Gennadiy "GGG" Golovkin's Oct. 5 fight against Sergiy Derevyanchenko is the first major bout on DAZN’s "fight season" schedule. It continues the following weekend with Oleksandr Usyk vs. Tyrone Spong on Oct. 12 before things really ramp up with Alvarez's return to the ring to open November.

With boxing fans clamoring for a Canelo vs. GGG triology fight in 2020, Alvarez first is venturing out of his comfort zone, moving up two weight classes to challenge Kovalev for the WBO light heavyweight title belt. Alvarez has a chance to become the fourth Mexican boxer to hold titles in four different weight classes if he defeats Kovalev.

A pair of star-studded rematches make up the back end of DAZN's lineup, including a non-traditional duel between internet stars KSI and Logan Paul and the anticipated heavyweight encore between Ruiz and Joshua.

The KSI vs. Paul rematch will take place Nov. 9 at the Staples Center in Los Angeles. The YouTubers fought to a majority draw in their six-round contest in Manchester on Aug. 25, 2018. This time, the will fight will be sanctioned by the California State Athletic Commission, meaning the helmets come off and the outcome counts toward their professional records.

Finally, Ruiz and Joshua are set to fight for the second time in 2019 on Dec. 7 in Saudi Arabia. Ruiz pulled off a shocking upset as a massive underdog in their first bout, winning via a technical knockout in the seventh round on June 1.

Here is DAZN’s entire fall fight schedule as of the announcement: