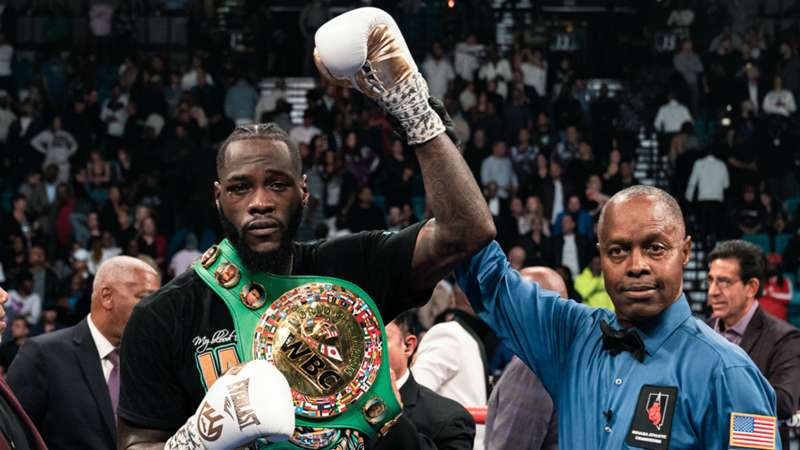 Deontay Wilder remains undefeated and is the most devastating one-punch knockout artist in boxing today. But he doesn't believe he should be ranked among the top 10 pound-for-pound fighters in the world and explains why.

LAS VEGAS — Deontay Wilder’s one-punch obliteration of Luis Ortiz in the seventh round Saturday night was one for the ages.

It ran the reigning WBC heavyweight champion’s record to a remarkable 42-0-1 with his 41st knockout victory. It also set up the highly anticipated rematch with Tyson Fury for early 2020. Fury is the only man who has managed to survive the knockout power of The Bronze Bomber.

But the one thing the highlight reel victory may not do is place Wilder on boxing’s fictional top 10 pound-for-pound list. And that’s OK with Wilder.

Why? Because he doesn’t believe that heavyweight fighters have a place on that list.

“When you’re dealing with the pound-for-pound list, I really don’t think it belongs in the heavyweight division,” Wilder told DAZN News at the post-fight news conference. “We can only be in one division. We can’t go up and down like all of the smaller fighters, so it doesn’t really apply to us.”

Boxing’s fictional pound-for-pound list is a comparison of fighters' skill level, regardless of their weight. Normally, fighters demonstrate their ability by winning world titles in multiple divisions to prove that they are the best in the world and can beat any fighter in just about any weight class. With Wilder being a heavyweight, it's impossible for the 6-7 fighter who came into this fight at 219.5 pounds to move through divisions.

While other fighters can simply gain or lose between five and seven pounds to move into another division, Wilder would have to shave off nearly 20 pounds just to qualify for cruiserweight at 200 pounds.

Not to mention,Wilder is tired of trying to please the skeptics who continue to question his skill. Granted, he was down several rounds on all three judges’ scorecards before laying waste to Ortiz. But the great equalizer he possesses in that right hand continues to remove the judges from weighing in on his wins and losses in the boxing ring. And as long as he continues to put on thrilling performances that send the fans home happy — as he did against Ortiz — a pound-for-pound list is of no use to the heavyweight champion.

“I never worry about the things that I can’t control,” Wilder continued. “You’re either going to pay to see me win or pay to see me lose. But all you’re ever going to get from me is a great fight."