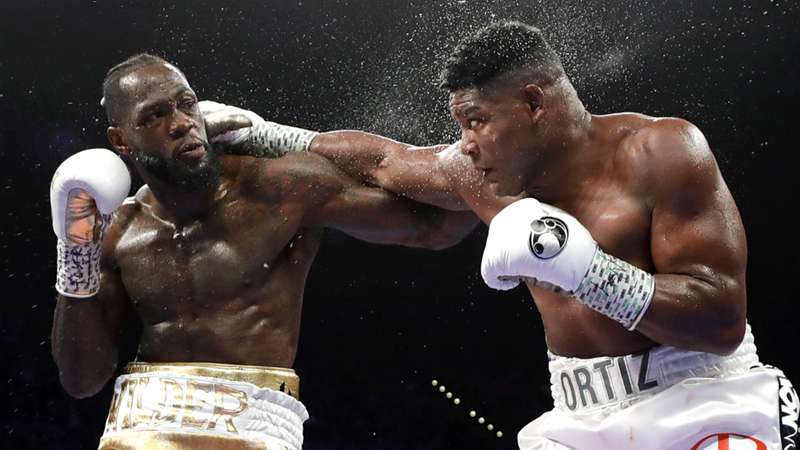 "The Bronze Bomber" makes it 2-0 against "King Kong" with another spectacular knockout.

"King Kong" ain't got nothing on "The Bronze Bomber" yet again.

Though Luis Ortiz was dictating the action as the aggressor, Deontay Wilder caught him with that pulverizing right hand to score a seventh-round knockout and retain his WBC heavyweight title Saturday night at the MGM Grand Garden Arena in Las Vegas. With the victory, Wilder ties Muhammad Ali with 10 consecutive defenses of the heavyweight title.

The end came when Wilder touched Ortiz with a light left jab, before coming across with a vicious right hand to snap Ortiz's head back, as the Cuban fighter fell in a heap and was subsequently counted out. Wilder frequently says "my opponent has to be perfect for 12 rounds, and I only have to be perfect for one second" and he proved that phrase right once again.

Following his thrilling victory, Wilder affirmed that a February rematch against Tyson Fury will indeed be next up on the docket. He also reinforced his desire to become undisputed champion.

"Next we have Tyson Fury, of course, the rematch next," Wilder said in the ring following his latest highlight reel KO. "Then, after that I want one champion, one face, one name."

🗣 #BOMBZQUAD @BronzeBomber gives the people what they want.

Perhaps he could get that if he defeats Fury and meets the winner of the Dec. 7 rematch between Andy Ruiz Jr. and Anthony Joshua for the unified world heavyweight crown.

Although Wilder delivered yet another scintillating KO, it didn't come easy, as Ortiz was winning the fight up until that point, effectively staying up close to the champ's chest and blasting him with left hands.

However, a more patient-than-usual Wilder set enough traps to eventually catch Ortiz slipping, before crushing him with that right hand to end their rivalry with another exclamation point.

Round 7:  Wilder letting go of that right hand, but it's slightly missing its mark, as Ortiz flashes a grin at the champ. Wilder misses and Ortiz makes him pay with a right-left hook combo. Wilder lands a left jab and bruising right hand and Ortiz is down in a heap! He's counted out. It's over! Wilder makes it 2-0 against "King Kong."

12:30 a.m.:  Ortiz has been impressive thus far, but one has to wonder if Wilder is giving "King Kong" rounds to ultimately set up that KO. That's a safe Vegas bet.

Round 5: Wilder seemed to briefly buzz Ortiz with a left hand, but Ortiz still landed the more stinging shots, including one right at the end of the frame. (10-9 Ortiz, 49-46 Ortiz)

Round 4:  Ortiz just loaded up on a left that landed. And another one. And again, the punches landed with Wilder sitting on the ropes. He has to get off the ropes. Ortiz has been imposing his will halfway into the round. (10-9 Ortiz, 39-37 Ortiz)

Luis Ortiz lands some big shots in Round 4, the @BronzeBomber beats his chest in response, @kingkongboxing style 👀

Round 3:  Wilder being extremely patient in the early going here. You could see him trying to measure Ortiz up. Ortiz has been the aggressor thus far. Wilder lands a left and there's that right straight to the chest of Ortiz. (10-9 Wilder, 29-28 Ortiz)

Round 2:  A headbutt caused that cut on Ortiz. Wilder is trying to assert the left jab to undoubtedly set up that right hand. The champ lands a right, but it came without the desired impact. Ortiz brushes Wilder back with another big left hand. Wilder needs to stay off the ropes. (10-9 Ortiz, 20-18 Ortiz)

Round 1:  Ortiz trying to get inside, but Wilder is keeping him at bay with feints and posturing. Ortiz lands a big grazing left hand, catching Wilder sitting on the ropes. Ortiz is cut on his right side by his hairline. Unclear as to how he got the cut. Perhaps it'll show in the instant replay. A slow first round, but an intriguing one. (10-9 Ortiz)

12:02 a.m.: And here comes the champ, with a warlord-like get-up, looking every bit like the king of the ring. He carries the best knockout rate in heavyweight boxing history at 95 percent. A very deliberate, grim and dramatic entrance from "The Bronze Bomber" at the MGM Grand Garden Arena.

12:00 a.m.:  Here comes Luis Ortiz at 40 years old. Will he be able to pull off the upset in his second chance against Wilder?

Round 12:  Stinging left hand from Santa Cruz really rocked Flores. Looks like Santa Cruz is trying to punctuate this performance. Flores better let it fly — otherwise this one is ending in a shutout. Breaking out into a fire fight with under 30 seconds to go, with both boxers landing shots and eating punches. But Santa Cruz was in complete control throughout. This should be scored a shutout, with Santa Cruz out-landing Flores 253-222. (10-9 Santa Cruz, 120-107 Santa Cruz)

Round 11:  Flores peppers Santa Cruz with a sharp combination early on, but it comes after a picture-perfect right hand from "El Terremoto." Santa Cruz banks this round too. (10-9 Santa Cruz, 110-98 Santa Cruz)

Round 9:  Santa Cruz's volume punching is on full display. He rocks Flores with a sharp counter right as the round ends. Flores better start taking risks. (10-9 Santa Cruz, 90-80 Santa Cruz)

Santa Cruz and Flores are trading shots as we approach the championship rounds! Will this one go the distance?

11:30 p.m.:  If things continue like this, Santa Cruz is going to float toward his fourth-division title with ease. He's dominating.

Round 7:  Right hook, followed by a lunging left hook during the waning seconds lands for Santa Cruz, as he continues to assert his dominance in this fight. (10-9 Santa Cruz, 70-63 Santa Cruz)

Round 6:  Flores is simply being outclassed. Santa Cruz is on another level. Every time Flores lands a crisp punch, Santa Cruz lands something sharper to almost remind him that there are levels to this fight game they share. (10-9 Santa Cruz, 60-54 Santa Cruz)

Round 5:  Flores did land some crisp shots that round, but Santa Cruz is still the more accurate of the two, peppering his opponent with shots. (10-9 Santa Cruz, 50-45 Santa Cruz)

Round 4:  Through four rounds, Santa Cruz looks like he's on another level and caliber than Flores. Although Flores was showing some good movement as the round came to an end. (10-9 Santa Cruz, 40-36 Santa Cruz)

Round 3:  Still firing off on each other, but it will be interesting to see if Santa Cruz can force his way to a level of full control and how soon he could pull that off. (10-9 Santa Cruz, 30-27 Santa Cruz)

11:00 p.m.:  Flores is moving forward through the first and early into the second rounds. That could mean that he doesn't respect Santa Cruz's power. Let's keep an eye on this moving forward.

Round 1:  To hell with feeling each other out. Santa Cruz and Flores let their hands fly to start it off. (10-9 Santa Cruz)

IT ENDS IN A DRAW! #FigueroaCeja

Brandon Figueroa and an overweight Julio Ceja fight to a SD draw, and "The Heartbreaker" retains his WBA Super Bantamweight belt. #WilderOrtiz2 pic.twitter.com/b703yykQA8

Brandon Figueroa and Julio Ceja combined to throw 2811 punches — the second most in super bantamweight history.

Their 784 combined landed punches is the 4th most in division history. @premierboxing | @PBConFOX

10:39 p.m.:  This fight is a wrap after a 12th round that embodied the entire bout, as it was fought in cramped quarters. We've got Ceja edging Figueroa, but since he tipped the scales overweight wouldn't win the title. Let's see how judges score it.

10:30 p.m.:  Ceja just sat on a vicious left hook that cracked Figueroa across the jaw during the waning seconds of the 10th round. But somehow Figueroa remains unfazed. Ceja is getting the better of Figueroa, giving the champ the business on the inside toward the body.

10:17 p.m.:  This entire seventh round has been fought phonebooth style, head-to-head, as both Figueroa and Ceja are unloading on hooks.

10:08 p.m.:  Plenty of heavy shots being landed here in the fifth round now. Ceja went back-to-back with left hooks that landed flush across Figueroa's chin, but the champ fires back with crunching body shots. Some fight right here.

10:00 p.m.:  This is how Wilder stepped into the MGM Grand Garden Arena, looking every bit like the superstar he is.

Deontay Wilder and Luis Ortiz are in the building! 👀

Follow @BronzeBomber and @kingkongboxing all the way into the ring with our ALL-ACCESS live stream. #WilderOrtiz2

9:56 p.m.:  Evenly-matched bout right now, as Figueroa and Ceja are really fighting fire with fire at the moment in Round 2.

9:33 p.m.:  It's over just like that! Wow! Ramirez ducks under Barthelemy's hook and fires a left hook that drops Barthelemy. He gets up, but is on shaky legs, and the ref has seen enough to stop it for an upset, fourth-round TKO toward Ramirez.

He didn't last much longer...

Eduardo Ramirez kicks off the PPV card with a 4th Round TKO over Leduan Barthelemy. 💪

9:30 p.m.:  Barthelemy with the slight edge through three rounds, but Ramirez did land more shots that third frame. And he's starting to pour the power on early into the fourth.

9:15 p.m.:  This pay-per-view launches with Leduan Barthelemy vs. Eduardo Ramirez in junior lightweight action about to start. This bout marks a rematch, as the two battled to a split draw back in September 2017.

9:00 p.m.:  Here comes the main card! Buckle up, as DAZN News will take you all the way through the Wilder-Ortiz 2 main event tonight.

DUSTIN LONG OUT OF NOWHERE! 😱

Marsellos Wilder goes down from a big left hook after he was in control of the entire fight. WOW! #WilderOrtiz2 pic.twitter.com/oX2GHMnZpE