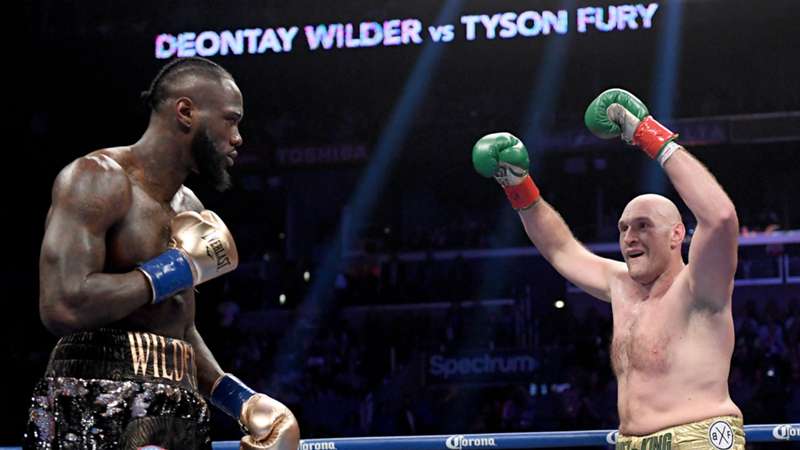 The two heavyweights came face to face in an entertaining press conference for their highly anticipated rematch Feb. 22.

Deontay Wilder and Tyson Fury sure know how to talk and build up a good fight. Better yet, the heavyweights know how to take that promotion and turn it into pure fireworks in the ring.

Wilder, the WBC champion, and Fury, the lineal titleholder, came face to face Monday at The Novo by Microsoft at L.A. Live during a press conference for their highly anticipated rematch Feb. 22 at the MGM Grand Garden Arena in Las Vegas.

Before the two stared each other down, Fury stepped onto the dais and launched his metal chair off the stage, replacing it with a taller one so he could look down on Wilder. And, oh yeah, the "Gypsy King" was rocking a custom suit with images of himself celebrating in boxing glory. Whether Fury is celebrating in a little more than a month's time remains to be seen.

When Fury took the mic for his opening statement, however, he kept it brief.

"For the first time in my boxing career, I don't need to sell this fight," he said. "People know what they're going to get."

The consensus from fight fans following the bout was that Fury thoroughly outboxed Wilder, but Wilder's two knockdowns of the British fighter arguably offset that boxing display. Regardless of how you saw it, each champ could make the case that he was cheated out of victory. Feb. 22 thus marks an opportunity to handle unfinished business.

"This point in time, he won't be able to get up," Wilder promised, referring to Fury miraculously rising from the canvas after Wilder's 12th-round knockdown in their first fight, "and since he's in WWE, I'm going to make sure he goes right out of the ring, and I might get on the top of the buckle of the rope and come down with a flying elbow kick."

"This is unfinished business that I will finish," Wilder continued (emphasis his). "I will do exactly what I said I will do — I'm gonna knock him out. Like I told him, I'm the lion, I'm the king of the jungle and come Feb. 22, I'm going to rip his head off his body."

Fury promised to once again outbox Wilder but this time finish the bout with a knockout of his own.

"I'm going to go out there, give him a boxing lesson and I'm going to knock him out," Fury said during a Q&A segment. "That's exactly what I'm going to do.

"I've never been as sure as anything in my whole life," he added moments later. "As sure as I was this morning putting this suit and shoes on and having to wash and brushing my teeth, that's how sure I'm gonna kick this motherf—er's ass all over that ring. One hundred percent, he cannot win."

Wilder blasted Dominic Breazeale with a devastating first-round KO in May and produced a seventh-round KO of Luis Ortiz in their own rematch in November.

Fury is well aware that Wilder only has to be perfect for one second because he possesses the best weapon in boxing — his right hand. The "Gypsy King" vows that Wilder won't be able to detonate and land it this time.

Fury added: "If I'm stupid enough to get hit by that big, stupid right hand, then I deserve to get knocked out."

Fury also said he's willing to slug it out with Wilder in a Marvin Hagler-Thomas Hearns style of fight to prove he's the better fighter.

"I'll meet you in the middle of the ring," Fury dared Wilder. "Two rounds, he's going down. He's getting knocked out in two rounds. I'm looking for a knockout. I didn't come here again to get a bad decision.

"I never had the gas to put that foot down," he said, referring to his conditioning in their first clash. "This time, I can turn that screwdriver until he's done."

Wilder didn't sound fazed at all.

"It's going to be a beautiful moment in time for me," Wilder said, "but not so pleasant for him."