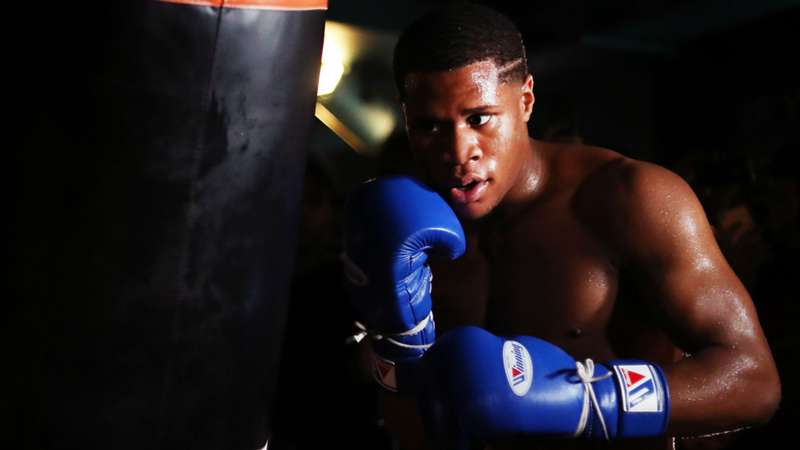 Devin Haney explains why nobody should underestimate Yuriorkis Gamboa and why the idea that big fights need time to develop is silly.

Devin Haney is aware that he needs to look impressive against Yuriorkis Gamboa in defense of his WBC lightweight title on Saturday night to keep pace with fellow rising stars Gervonta Davis and Teofimo Lopez Jr. after what they accomplished in their recent outings.

Haney (24-0, 15 KOs) was impressed with Lopez’s stunning upset of Vasiliy Lomachenko and Davis’ brutal knockout of Leo Santa Cruz in October, but he has plans to outperform his peers when he takes on Gamboa at Hard Rock Live at the Seminole Hard Rock Hotel & Casino in Hollywood, Fla., and live and exclusively on DAZN.

And while some are looking at the 38-year-old Gamboa as a has-been, Haney wants to remind everyone that the Cuban more than held his own against Davis despite suffering a tear in his right Achilles early in the fight.

"People are overlooking Gamboa," Haney told DAZN News. "They forget he gave Tank his toughest fight and he was also Terence Crawford’s toughest fight. He doesn’t lay down for anybody."

Gamboa pushed Davis to the 12th round for the first time in his career before suffering a TKO stoppage. What Haney wants people to remember about that fight is that Gamboa hung with Davis on one leg.

"People seem to forget that Gamboa fought Tank with a torn Achilles that he suffered in the second round and it was still (Davis') toughest fight," Haney said. "It was a very good and competitive fight. Yeah, Tank knocked him out in the 12th round but he was knocking people out in the first three or four rounds before that."

Haney is a little concerned that an outstanding performance may scare off the likes of Davis, Ryan Garcia and Teofimo Lopez, but he says that he’s ready for the best that boxing has to offer and hopes that what Lopez did against Lomachenko is a sign that the new generation of boxers are ready for the top names now and not afraid to lose.

"(Lopez) definitely kicked down the door for the younger fighters and now these big fights are going to get made because the fans will demand it," he said. "There shouldn’t be such a thing as allowing a fight to marinate anymore. If a fighter loses it shouldn’t be the end of the world.

"You can look at the UFC right now and when the top fighters lose, they come back and can be right on top again. But if boxers lose, we’re all washed up. That doesn’t make any sense."

While Haney is not afraid of risking his undefeated record to take on the division’s best fighters, he’s not so sure that his peers feel the same way. For him, it’s not a matter of if they will fight him, but when.

"They aren't eager to call me out because they know how much talent I bring to the table," Haney said. "But that's OK because I'm going to be boxing's first billion-dollar fighter."