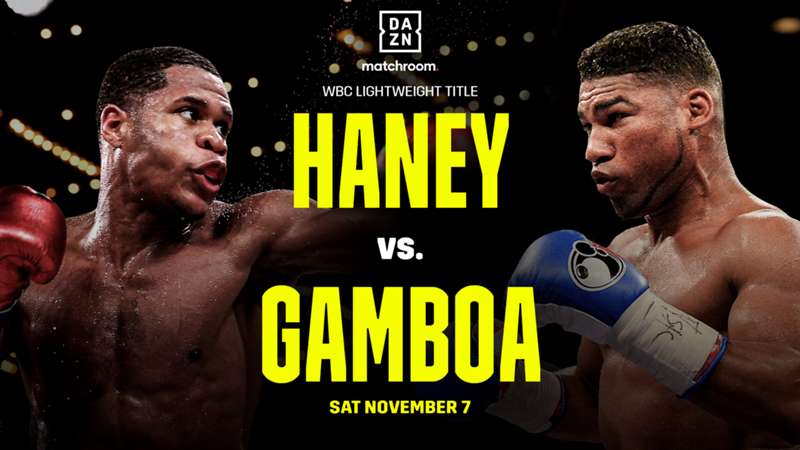 Click here to watch Haney vs. Gamboa on DAZN

The WBC lightweight champion returns to action on DAZN on Saturday, Nov. 7.

Right now, the lightweight division is on fire with Teofimo Lopez Jr. and Gervonta Davis notching big wins in the last couple of weeks. Now, it's time for another rising star in the 135-pound weight class to make a statement as Devin Haney puts the WBC title on the line against former unified featherweight titleholder Yuriorkis Gamboa on Saturday from the Hard Rock Live at the Seminole Hard Rock Hotel & Casino Hollywood, Florida.

One of the most exciting young talents in boxing returns to action this Saturday, November 7th. 🥊 pic.twitter.com/mMlztwqP8w

Haney (24-0 15 KOs) steps back into the ring for the first time since November 2019 when he defeated Alfredo Santiago to defend his championship for the first time successfully on the Logan Paul-KSI undercard. Following the fight, Haney went on to have right shoulder surgery. Haney had targeted bouts with Adrien Broner and Gary Russell Jr., but Gamboa was the one willing to step up to the plate and challenge the 21-year-old. Haney knows Gamboa has been through the ringer with some of the best the sport has to offer.

“Yuriokis Gamboa is a dangerous and experienced fighter,” Haney said. “He’s a former unified world champion, and he has been in the ring with some of the best. He hurt Terence Crawford with a big shot, so his power is not to be ignored. He beat Orlando Salido who beat Vasiliy Lomachenko. Less than a year ago he took Gervonta Davis into the 12th round, something no one has ever been able to do. Gamboa is a true warrior and I’m not taking him lightly. I’ve called out all the top names, and I finally got someone who will challenge me for my title. I intend on making a statement in this fight. My hunger is on another level. It’s time to show the world who the best fighter in boxing is and that’s me!”

Without question, Gamboa (30-3 18 KOs) is Haney's toughest date to date. The Cuban is a 2004 Olympic gold medalist and faced pound-for-pound great Crawford and Davis. In the early part of his 12th-round TKO defeat to Davis, Gamboa suffered an Achilles tear and fought until the very end. After the fight, Gamboa underwent surgery to repair the injury. Gamboa is getting his third opportunity to become a two-weight world champion and knows this could be the final time he gets a crack at the gold.

“I'm extremely thankful to God for allowing this fight to happen and for the miracle of healing my Achilles,” Gamboa said. “I've been dreaming and wishing of fighting for the WBC Green Belt ever since I was an amateur in Cuba. I'm ready and determined to win this title for my fans and to prove those who wrote me off as a washed-up fighter wrong. I came up short against Davis because of my Achilles in the second round, but I fought the rest of the fight on one foot, hurting him in the middle rounds. You are going to see a healthy Gamboa fight with both of my legs, fists and warrior heart of mine. With God's blessings I will come out victorious Nov. 7.”

Can Haney rise to the occasion and have a spectacular performance to keep himself in the conversation at lightweight? Will Gamboa be able to show he's got more in the gas tank?

Here’s a complete guide to the Haney vs. Gamboa fight card.

When is Devin Haney vs. Yuriorkis Gamboa?

The Haney vs. Gamboa card gets underway at 8 p.m. ET on Saturday. Haney and Gamboa are expected to make their ring walks about 11 p.m. ET, but the time depends on the length of the earlier fights.

Haney vs. Gamboa TV, live stream: How to watch

The Haney vs. Gamboa fight isn't available via traditional pay-per-view or a linear TV channel. Boxing fans can instead sign up to watch the fight online with DAZN, the global sports live-streaming service. DAZN is available in the U.S., Canada, Germany, Austria, Switzerland, Japan, Italy, Spain and Brazil, and is expanding to include more than 200 countries and territories in December.

How much does the Haney vs. Gamboa fight cost?

New subscribers to DAZN can sign up for a monthly subscription or annual pass to watch the fight. Pricing options vary by region. In the U.S., the annual pass — which includes access to all of DAZN’s live events, as well as highlights, behind-the-scenes features and original shows — is $99.99. Those who prefer a monthly plan can sign up for $19.99.

Where is the Haney vs. Gamboa fight?

The Haney vs. Gamboa fight will take place at the Hard Rock Live at the Seminole Hard Rock Hotel & Casino Hollywood, Florida.

This marks the first time Haney competes at the venue, while Gamboa fights for the second time at Hard Rock Live. In his first fight in the United States, in October 2007, Gamboa beat Adailton de Jesus via sixth-round TKO.