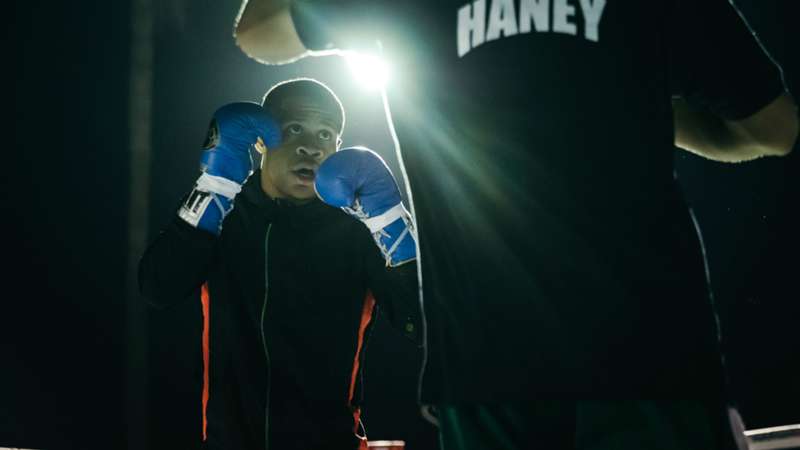 Devin Haney wants the biggest names in boxing but believes that the likes of Vasiliy Lomachenko, Gervonta Davis and others are using the 20-year-old's age as an excuse to avoid him.

LOS ANGELES — He’s not even 21 years old yet, but WBC lightweight champion Devin Haney gets it.

“It” meaning the business of boxing and understanding what it takes to become the sport’s next big star.

Less than two weeks shy of becoming legal drinking age in the United States, Haney is laying in bed at his hotel suite. Cell phone in one hand, a bottle of water in the other with the Milwaukee Bucks vs. Los Angeles Clippers game playing the background. He’s prowling social media likely in search of one of his boxing peers looking for a challenge.

Although courteous and oftentimes beaming a smile, Haney craves competition. He’s needled at Gervonta Davis, openly called out Vasiliy Lomachenko and sought anybody who is near his weight class for an opportunity to showcase his ability.

A lot of them talk, but Haney is waiting for someone to take the bait and meet him in the ring.

He wants all the smoke.

“I want all of these guys,” Haney says as he looks up from his phone. “All these fighters are using my age as an excuse to not get into the ring with me. But the truth is that I’m a world champion, and if you are fighting me, you probably will make more than you have ever made in your career. Everything is there for a big fight, but these guys don’t want to fight.”

Haney’s father and trainer, Bill, is picking up discarded clothes and towels from an earlier gym workout just outside the door. On the table in the living room is a briefcase with a picture of Haney perched above it. Inside the briefcase is a WBC title he won a little over a month ago when he stopped Zaur Abdullave in four rounds. Initially, it was for the interim title, but with Lomachenko being named as the sanctioning body’s franchise champion, Haney was elevated to full champion.

It’s convoluted, but it doesn’t matter. Haney has done what he is supposed to do to become world champion, and now it’s up to the other fighters to take it away from him.

“That belt means everything to me,” he says. Earlier in the day, Haney was doing fighter portraits, and in one particular image, The Dream was washed over with emotion. He had the green title over his shoulder and stared at it intently as the camera flash went off.

“That title is something that I worked at for a long time,” he says. “I never thought I’d be a world champion this young and hold the most prestigious belt in boxing. I’m so happy.”

Haney (23-0, 15 KOs) will defend the WBC lightweight title for the first time on Saturday night against Alfredo Santiago (12-0, 4 KOs) on the undercard of the clash of YouTube fighters Logan Paul and KSI. Although some hardcore fans have written the main event off as a farce, Haney sees it as a tremendous opportunity to be introduced to a new audience. With Paul and his social media and YouTube following that exceeds 40 million fans, and KSI’s reach touching another 30 million, the opportunity for Haney to put himself on their radar is one he simply couldn’t pass up.

“Even though I’m a world champion and have already headlined a few shows, (being on the undercard of YouTube fighters) is something you have to do to break through,” he says. “Of course, I wanted to do a show back home in Las Vegas, but I saw a huge opportunity that I could capitalize on, so I said why wouldn’t I take it?”

Part of what makes Haney special is that he recognizes what needs to be done outside of fighting in order to connect with an audience and go from boxing star to mainstream celebrity. As a teenager, Haney paid close attention to Floyd Mayweather Jr. and saw that there was always great interest in what the retired champion would wear and what his walkout consisted of. Haney took notes and has applied it to his own craft.

“Guys like Floyd Mayweather didn’t make you just want to see them fight, you wanted to see the entire show,” Haney says as he sits up in his bed and puts his phone on the nightstand beside him. “You have to give boxing fans more than just winning fights.”

Haney has connected with legendary designer Dapper Dan and Gucci once again for his ring attire on Saturday night while also planning to have a special guest as part of his entrance. It’s something that the 20-year-old plans to make a staple for his fights moving forward as his fanbase continues to grow.

Meanwhile, Haney isn’t short on options for opponents. There are rising stars Gervonta Davis and Teofimo Lopez, as well as the man who is near the top of the pound-for-pound rankings in Lomachenko. Haney doesn’t feel the need to wait and let those fights grow in stature. Instead, like Canelo Alvarez, he believes that he’s ready for those challenges now with Lomachenko being at the top of his hit list.

And then there’s social media superstar Ryan Garcia, who Haney has a storied history with in the amateurs as they split their six meetings, with Haney winning the last three. Garcia is still climbing the ladder in an effort to win a world title but made it clear that a clash with Haney could be this generation’s Floyd Mayweather vs. Manny Pacquiao fight, and Haney tends to agree with that assessment.

“I definitely agree,” he says. “We’re both marketing ourselves, and we are the two young guys bringing boxing into the new era. Whenever it happens, it will be massive.”

While he waits, Haney will look to put on another scintillating performance that will set social media on fire this weekend and capture the adoration of the fans tuning in to see Logan Paul vs. KSI.

“I’ll keep talking about making the big fights but it takes two to tango, and I can’t force them to get into the ring with me,” he says. “I want them all but let’s see if they want to fight me.”