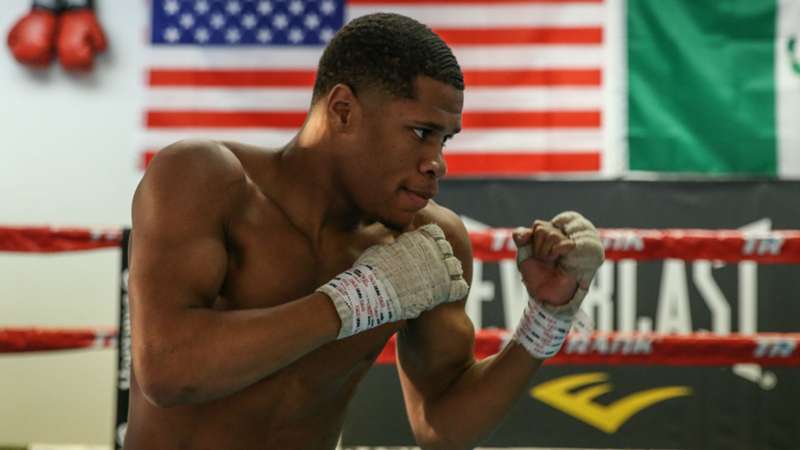 One of the premier prospects in the sport continues his ascension toward becoming a world champion.

Devin Haney's professional boxing career has been like the cars in the Daytona 500: fast.

Haney, 20, made his professional debut in December 2015, one month after his 17th birthday. A little over three and a half years later, Haney is on the road to becoming a future world champion.

During this year alone, Haney headlined his first event in May and went on to notch one of the best KO's of 2019 when he nearly sent Antonio Moran flying to the White House from the MGM National Harbor in Oxon Hill, MD.

Now, Haney is on the brink of competing for a world championship, as he's on the marquee once again, facing Zaur Abdullaev on Friday, Sept. 13 at the Hulu Theater at Madison Square Garden on DAZN in a WBC final title eliminator. The winner is slated to take on the victor of the Aug. 31 bout between Vasiliy Lomachenko and Luke Campbell for the vacant WBC title.

A rapid ascent like Haney has been on would shock many, considering he's so young in the game. But just don't tell "The Dream" that.

"It doesn’t surprise me, but I’m very excited," Haney said on a conference call. "I knew this time would come. I’m very thankful for the opportunity. Every time I go to New York, they show me crazy love. I just look forward to putting on a great performance and showing the world what Devin Haney is made of once again."

Originally, Haney and Campbell were going to meet for the WBC belt. But Lomachenko, the WBA and WBO lightweight champion, sent a request to the sanctioning body to approve a fight between him and Campbell and it was granted.

Most would be disappointed and upset over what happened. Not Haney, who believes he'll get a crack at gold when it's meant to be.

If Haney beats Abdullaev, there's still no guarantee he fights the winner of Lomachenko-Campbell. Haney's promoter Eddie Hearn said on the same conference call that if Campbell and Haney win then they would meet in December since they are both promoted by the man who heads Matchroom Boxing. Facing Lomachenko right away, though, would prove to be difficult since the Russian is promoted by Bob Arum, who has already earmarked Lomachenko to face the winner of an expected bout later this year between IBF lightweight champ Richard Commey and Teofimo Lopez for the undisputed title.

Haney (22-0, 14 KOs) is getting bigger and doesn't plan on sticking around at 135 pounds for too much longer. He envisions one day fighting as high as 154. So, if he's going to fight for the WBC lightweight title, it'd have to be sooner rather than later.

Before the talk of a championship fight becomes a reality, Haney's got a stern test in the undefeated Abdullaev (11-0, 7 KOs). Haney knows what lies ahead, but isn't looking past what Abdullaev brings to the table.

"I believe he’s very technical," Haney said. "He doesn’t take too many chances. He’s more straight up and down and sticks to the basics. Sometimes those are the toughest fights."