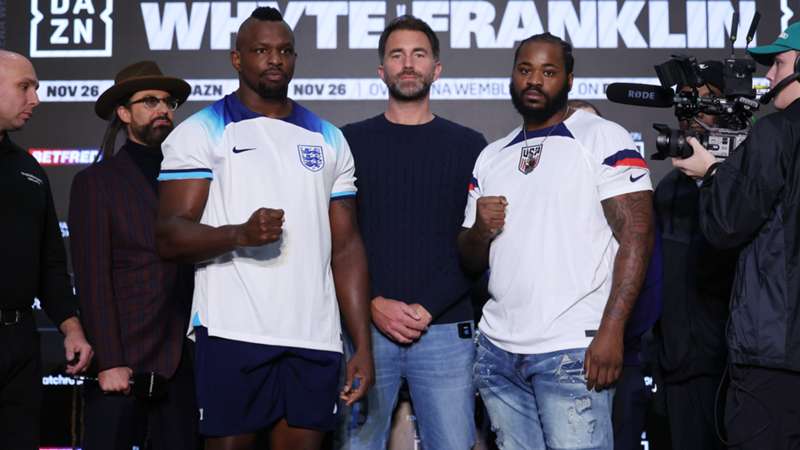 Here's what both heavyweights must do to be successful in their pivotal matchup Saturday night, live on DAZN.

The winner of the Dillian Whyte-Jermaine Franklin heavyweight clash Saturday night, live on DAZN, will certainly put himself in line for a big payday in the form of a mega bout in 2023.

Will Whyte bounce back from being knocked out in two of his last three fights? Or will Jermaine Franklin produce his biggest career victory yet in what would be an upset special?

With the stakes high, DAZN lists the keys to victory for both heavyweights.

Pepper Whyte with the jab

Jermaine Franklin’s ability to establish the jab early could pay two-pronged dividends later: It could soften Dillian Whyte up to bank rounds or serve as the setup shot to put the veteran heavyweight flat on his back. Franklin should look to touch Whyte early with that jab, especially his left. Those early connections could pave the way for the Saginaw, Michigan native to land something ferocious and significant.

Use his feet to bring constant pressure cautiously

At 29 to Whyte’s 35-years-old, Franklin has the younger legs with the lighter feet. He must use that decent footwork to pressure and turn Whyte to constantly bring the fight to the “Body Snatcher,” while cautiously guarding against a power display from his older-but-still-potent opponent. Franklin’s ability to hit and move, forcing Whyte to reset at times, could be key. Franklin's experience being in Tyson Fury's camp should help.

Explode up the middle with uppercut

Franklin’s trainer Jesse Addison called Whyte a wounded lion ready to be finished. Well, if that’s the case, his charge should look to use the same weapon that Fury and Alexander Povetkin unleashed to stop Whyte — an explosive uppercut. If Franklin can pepper and distract Whyte with that left jab, it could create just the crevice needed to explode up the middle for a fight-changing uppercut that could propel the American in line for a life-altering purse in 2023.

Attack the body inside

Dillian Whyte doesn’t shy away from a fight inside. When it gets there — and it should happen quickly — it’s up to Whyte to make good on his nickname and pound Franklin’s body. That could be the way to force the American to lower his arms just enough for Whyte to snatch his soul with a vicious shot upstairs.

For a moment in their December 2015 bout, Whyte had deployed a compact left hook to the temple to stumble and really hurt Anthony Joshua. Although “AJ” went on to win the fight by TKO, Whyte learned how much of a weapon that short hook can be for him. Considering that Whyte stands a couple of inches over Franklin, the Brit has the chance to catch the American with the shot right over the top. If he lands it cleanly, the results can be devastating.

If Franklin brings the fight to Whyte as aforementioned, the latter has the ability to absorb some blows and lure the younger and possibly overzealous fighter in. Whyte being successful at that could be just what’s needed to generate a damaging, timed counter that not only shows Franklin how much power he has left but quite possibly end the fight right there.