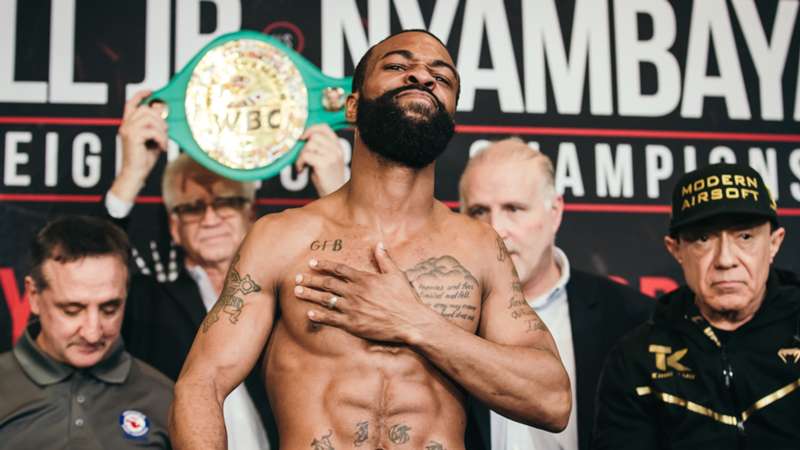 The WBC featherweight champion tries to dispel the theory that he's content with one fight per year by eyeing a super bout.

Gary Russell Jr. sits snug with a seatbelt draped across his chest as he fields questions from one reporter after another via Zoom.

If only the WBC featherweight world champion was in the driver’s seat to his career with the ability to secure a mega fight as easy as tapping a button on his touchscreen.

Russell has been criticized heavily for having only one fight per year from 2015 to 2020. His mandatory title defense against Mark Magsayo at the Borgata Hotel Casino & Spa in Atlantic City, New Jersey on Saturday night marks his first bout in nearly two years, with his last win coming all the way back on February 2020 via unanimous decision over Tugstsogt Nyambayar.

At 33-years-old, Russell (31-1, 18 KOs) has an urgency to make a super bout against a Shakur Stevenson or Gervonta Davis or even to try to avenge his sole pro loss by running it back with Vasiliy Lomachenko. But first, “Mr.” Gary Russell is going to try to dispel a longstanding theory that he’s content with producing the bare minimum in-ring activity yearly.

He believes the media and fans alike have it all wrong. Whether you believe his counter argument is up to you.

“In one of my other interviews, I said that the fans and the media have to start holding their selves accountable for these type of things,” Russell starts telling DAZN News on Tuesday over a Zoom conference. “Ya’ll need to put it out there. ‘Hey, Gary has been willing to make this fight happen, he’s been trying to make this fight happen. Why is this guy trying to not take the fight? Why is that guy not trying to take the fight?’

“You guys have the platform to be able to put it out there to the masses but instead sometimes it get misconstrued in one way, shape or form and then it comes out as I’m only competing once a year,” he continues. “I think it’s the fact that my skill set, whenever I do compete, these other guys just aren’t in a rush to compete against me.”

In his division, Russell already touts a win over IBF champion Kiko Martinez. He’s been calling out Leo Santa Cruz for years to no avail and tells DAZN News that he has decided to leave the WBA titleholder alone. Although Russell readily admits that a clash with WBO champion Emanuel Navarrete would be one that he would like to have, he foresees it being “more of a difficult fight to get because (Navarrete’s) on the other side of the fence, just dealing with (Top Rank’s) Bob (Arum) and everything.”

So, that has Russell looking outside the featherweight landscape to WBO junior lightweight king Stevenson and even WBA (Regular) lightweight champion and WBA (Regular) junior welterweight titleholder Davis for possible super fights that would surely plump up his profile.

“I think Shakur Stevenson is a great boxer,” Russell concedes with DAZN News. “But you also have to put it out there that Shakur Stevenson was competing at 126 (pounds) and he had the title at 126 and we had the opportunity to unify and he didn’t want to come nowhere near ‘Mr.’ Gary Russell Jr. He wanted to chase after them other guys. He wanted to compete against them.”

Still, Russell respects the 24-year-old, who many believe has all the tools to be the next great boxing superstar of the new generation.

“We’ve sparred each other before,” says Russell, who salutes Stevenson for revealing what transpired in their session.

“A reporter asked Shakur, ‘What do you think about Gary Russell Jr. and Gervonta ‘Tank’ Davis if a fight like that were to happen?’” he continues. “You know what Shakur told the reporter? ‘The hardest I ever been hit was by a right hook by Mr. Gary Russell Jr.’”

Russell adds: “Before he became a world champion, I felt as though he would be able to do so, but it wouldn’t have happened if he had to compete against ‘Mr.’ Gary Russell Jr.”

As mouthwatering of a pure boxing contest that a tilt against Stevenson would present, Russell leans toward Davis as the fight that would move the needle on pushing his career to new heights.

Whether either of those bouts can come to fruition, Russell still wants another crack at Lomachenko before their respective boxing careers are a wrap. And he doesn’t care how or where it happens.

“We could do some Rocky and Apollo Creed s—t and we could boogie in our own little zone,” Russell says with a grin. “I just want to do it for myself. He got a gift. He’s lucky I had to lose weight. I had to lose 5½ pounds before we even competed (back in June 2014, when Lomachenko produced a majority decision win).”

Whatever happens, Russell believes 2022 could be the first year since 2014 that he has three fights. Already, though, that lofty ambition comes equipped with a caveat as Russell also revealed to DAZN News that he's entering Saturday night's fight against Magsayo with a "slight injury."

If it's as "slight" of an injury as he states, and the southpaw edges Magsayo relatively unscathed, perhaps Russell could move up and get one step closer to making a clash with Stevenson or Davis happen.

Then, "Mr." Gary Russell could finally shatter the belief that he's at peace with one bout per year. But more importantly, he could prove his greatness.