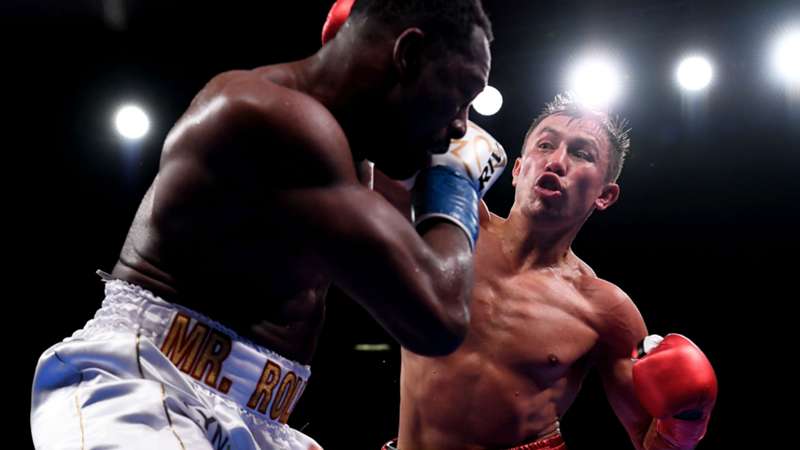 Gennadiy Golovkin scores a smashing fourth-round KO of Steve Rolls in his DAZN debut and wastes little time calling out Canelo Alvarez for a third fight.

NEW YORK — The "Big Drama Show" is back and ready for another shot at Saul "Canelo" Alvarez.

Any thought of Madison Square Garden playing host to a second consecutive major boxing upset was put to bed — literally — by Gennadiy Golovkin, who delivered a devastating fourth-round KO of Steve Rolls on Saturday night, before calling out his heated rival.

After dropping and knocking out Rolls with a scintillating left hook in the fourth round, Golovkin was asked who he wants in the ring next and flashed a huge grin as the Garden crowd of 12,357 roaring fans already knew the answer.

How quickly that trilogy fight can be made and whether it indeed happens in September remains to be seen, but the fact that both boxers now fight on DAZN should help make it a reality. Oscar De La Hoya, seemingly posturing, jabbed at GGG by tweeting:

Saturday night, the 37-year-old Golovkin put his power on display once again, improving his record to 39-1-1 with 35 KOs.

Although Rolls (19-1, 10 KOs) did well for himself through the first three rounds, landing punches and refusing to budge, GGG drove the Canadian boxer back with a pinpointed, winding overhand left to the temple in the fourth. Sensing Rolls was hurt and wobbled, Golovkin charged and ended the night emphatically with a left hook seconds later that caught Rolls square on the chin as he fell face first in a heap.

"I love knockouts and I love New York," Golovkin said. "It was a great night all around."

This was Golovkin's debut on DAZN and first fight under trainer Johnathon Banks, and GGG showed absolutely no ring rust in his first bout in nearly nine months.

"I like what I saw in the ring from the short time we had in camp," Banks said.

About the looping overhand left that set up the finishing shot, Banks offered during the post-fight press conference: "The goal is to get him practicing a lot of different arsenal of punches. That’s the goal — just keep the variety of punches up."

Banks is confident that working with GGG for a longer period of time will better his chances in a third fight with Canelo.

"With a longer training camp," Banks said, "the output and progress will look better."

Here's how the entire Golovkin vs. Rolls card went.

Round 4: GGG is making sure that Rolls has no breathing room, pressuring the Canadian as he's done to opponents in the past. But Rolls is right there and not budging. Hard overhand left from Golovkin. Another pulverizing overhand left catches Rolls right on the chin and Rolls is down face first in a heap! Ref begins to count, before ending it in a knockout. Devastating KO from GGG. Oh, the knockout power of Gennadiy Golovkin. The "Big Drama Show" is back!

Round 3: Rolls is standing toe-to-toe with Golovkin, and at times, GGG is showing him that it's a mistake to do so, punishing him with shots that will take their toll later — especially to the body. Rolls' corner is imploring him to dig into the body himself, and he takes heed late, but Golovkin took this round. The Garden attendance announced at 12,357. (29-28 Golovkin)

Round 2: Rolls with a nice right hook that lands flush to start the round. But GGG digs into the body seconds later. Rolls fighting back and even backing Golovkin up briefly there. Golovkin doubles up on the left hook, but Rolls pops Golovkin's head back with a left hook of his own. A nice round for Rolls. He vowed to give Golovkin a fight and showed just that this round. (19-19)

Round 1: Golovkin throws and lands a lunging left hand to put Rolls on notice of his power. Rolls popping the jab and holding his ground, not letting GGG walk him down just yet. Both fighters still feeling each out. And just when I say that, GGG opens up a bit, letting his hands fly a bit. (10-9 Golovkin)

11:00 p.m.: The fighters' introductions are announced. The Garden crowd, which has filled up and looks close to being sold out, is giving it up to GGG.

10:54 p.m.: The lights go out and here comes Gennadiy Golovkin to the roar of the crowd here in NYC.

10:30 p.m.: Miguel Cotto gets a huge pop from the Garden crowd. Zab Judah, Shane Mosley and Antonio Margarito were just a few of the fighters to feel Cotto's wrath at MSG.

Up next is the main event. Let's see if GGG brings the "Big Drama Show" to bounce back from his first pro loss — a majority decision to rival Saul "Canelo" Alvarez last September.

Round 3: Akhmedov loading up on combinations to the body, while McDaniel tries to hold on. Akhmedov gives chase and again delivers a barrage of punches. McDaniel is reeling up against the ropes and he's down. McDaniel takes the count, gets up off the mat, but is wobbly. The ref takes a closer look and stops the action right there, giving Akhmedov the third-round TKO.

Replay shows the last punch that Akhmedov threw hit McDaniel right in the back of the head, and the ref did warn Akhmedov about rabbit punches earlier in the bout. Yet, the GGG Promotions' fighter gets the victory, remaining undefeated now at 15-0.

Round 2: Akhmedov with a right hook to the body followed by a hook through McDaniel's guard. He did enough to capture the round, but is a bit too upright. McDaniel has the opportunity to use his speed to evade Akhmedov's punches. Let's see if that becomes a factor as this bout progresses. (19-19)

Round 1: McDaniel giving up four inches in height, but showing some slick boxing in Round 1, throwing and landing pinpointed punches. (10-9 McDaniel)

10:03 p.m.: McDaniel and Akhmedov have made their way into the ring. Just the fact McDaniel is here is amazing. The New Orleans native was a victim of a drive-by shooting just nine months ago, as bullets fractured six of his ribs, tore through his collarbone and punctured his lung. Nine months later, he's featured in the co-main event to GGG at MSG.

10:00 p.m.: With the Raptors up 3-1 in the NBA Finals, Steve Rolls looks to continue to make Toronto proud and shock the world tonight. Listen, after last weekend at The Garden, don't act like anything is a done deal. That, and he didn't take a picture with Drake leading up to this fight, so he's got a chance.

Up next, we have the co-main event pitting Marcus McDaniel against Ali Akhmedov in super middleweight action.

9:48 p.m.: Ceballo wins by unanimous decision to roaring applause from the hometown NYC crowd. He peppered Eyubov with stinging punches throughout this fight. Although Eyubov kept moving forward, trying to get inside, he wasn't able to land enough of those lunging hooks to make it a closer fight. Some chin on him, though.

9:30 p.m.: Ceballo is treating Eyubov like a heavy bag through four rounds, but the latter keeps digging to get inside to tee off on shots — even if it means eating punches and absorbing plenty of punishment along the way.

9:17 p.m.: Action-packed first round, as Ceballo asserts his jab to set up some power shots, but Eyubov continues to move forward, trying to get inside. He's giving up height and reach to Ceballo, so getting inside is Eyubov's main shot at winning.

9:10 p.m.: Bakhtiyar Eyubov and Brooklyn's Brian Ceballo making their way out to the ring, as this main card is just about to start.

9:00 p.m.: The bright lights are on and the main card should start any second now. Meanwhile, here's Steve Rolls entering The Garden, looking for his Andy Ruiz Jr. moment tonight. The Canadian boxer is undefeated at 19-0 with 10 KOs, but has never faced a fighter the caliber of GGG.

8:41 p.m.: Madimov delivers a punishing right hook, before smothering Gonzalez with a barrage of unanswered punches, forcing the ref to stop the action in the sixth round. Madimov used some deceptive footwork and was all over Gonzalez throughout, celebrating his TKO with a cartwheel and backflip in the middle of the ring to the crowd's delight.

-Get The TKO
-Backflip In The Ring

8:30 p.m.: Israil Madimov putting Norberto Gonzalez on notice of his power, throwing and landing some heavy hands early on in their junior middleweight clash. He's winding up his hooks to the body, and you've got to think that they're taking a toll.

8:09 p.m.:  Conwell just picked up a hard-fought unanimous decision win. The crowd, which is still very much filing into The Garden, just came alive upon seeing footage on the big screen of Gennadiy Golovkin entering "The World's Most Famous Arena."

8:00 p.m.:  Conwell and Pennington really going at it here, currently in the ninth round.